The back up blog for the page, SocialistStandard@MySpace, continues to be updated, so please feel free to check it out.
Posted by Imposs1904 at 8:50 AM No comments:

From the Socialist Courier blog:

Spare a tear for the plight of this luckless billionaire:

"One of the world's richest men is selling his £40 million house in London's "Billionaires' Row" after Barratt Homes was granted permission to build flats next door. Lakshmi Mittal led the opposition of his well-heeled neighbours when the house builder applied for permission to put up an apartment block in The Bishops Avenue, Hampstead. However, the plans were approved and now, even though the luxury flats are being marketed at between £4 million and £11 million each, Mr Mittal has put his stately pile, Summer Palace, on the market." (Daily Telegraph, 29 February)

Imagine the indignity of having to share your street with people who can only afford a £4 million house. It doesn't bear thinking about. Our sympathy goes out to the poor ill-treated man.

Email ThisBlogThis!Share to TwitterShare to FacebookShare to Pinterest
Labels: Richard Donnelly, Socialist Courier, The Super-Rich Links to this post 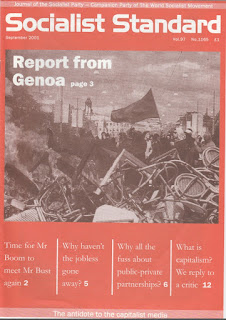 In "What is Capitalism?" (Socialist Standard, December 2000), you claimed it would be impossible to support the world's present population in an economy of self-employed small producers. You warned of the danger that anti-capitalists would be diverted by the "small is beautiful" strand in Green and anarchist thinking.

This is not so obvious as you seem to think. The present degree of concentration of capital is not the result of some inherent dynamic in the development of technology, but of state subsidies to gigantism. There is a whole literature by Walter Adams, Barry Stein, F.M. Scherer, etc on economy of scale, showing that even heavy manufacturing reaches peak efficiency at relatively low levels of production—in the case of autos, 3 percent of the US market. Kirkpatrick Sale argued that most light consumer goods could be produced locally in factories of fewer than fifty workers.

Even such a decentralized condition is not the economy of self-employed artisans you wrote of. But a decentralized, market industrial economy does not automatically imply capitalism. I agree with the mutualist Benjamin Tucker that the extraction of a surplus from labour (i.e., capitalism) is impossible without state intervention to guarantee privilege and subsidize accumulation. Without the legal money monopoly to keep capital scarce and expensive, and thereby maintain labor discipline, wages would rise to value added and bargaining leverage would increase astronomically.

As a Wobbly I firmly support direct action to achieve workers' control of large employers. But in the small business sector, it is better simply to dismantle the state system of privilege and let a real free market lead to de facto worker ownership. And market relations between worker-controlled firms, including large industrial plants, avoids the iron law of oligarchy. The tendency of federated planning bodies to end up rubber-stamping the decisions of a permanent technical staff is illustrated in LeGuin's The Dispossessed.

Small-scale, organic farming may be more labor intensive than mechanised agriculture, but it can be much more efficient in output per acre. Output could be drastically increased by intensively rebuilding the soil with leguminous cover crops, composting all wastes, and using cisterns and rain traps to conserve water for irrigation. The Third World has plenty of labor available. The main reason for hunger is the fact that hundreds of millions of peasants in the past generation have been evicted for cash crop agriculture. The solution is not the "Green Revolution", but getting rid of generals, landlords, and the West's fraternal assistance to death squads.

Finally, keep up the good work. Free market/mutualist types in the libertarian socialist community may disagree with you on many things, but we are also eager to cooperate on the things we have in common: eliminating subsidy and privilege, ending transnational corporate imperialism, and dismantling the jackboot police state.
Kevin A. Carson , Lovell, Arizona, USA.

Reply:
You defend the notion that a market economy need not necessarily be capitalist. The article itself already conceded this point in connection with what Marx called "simple commodity production", but questioned whether such an economy could be established today, indeed whether it had ever existed anywhere, suggesting that "the nearest that may have come to it would have been in some of the early colonial settlements in North America". It is therefore interesting that you should call in to defend such an economy Benjamin Tucker (born in Massachusetts in 1854) whose mentor was Josiah Warren (born in Massachusetts in 1798).

Basically, the individualist anarchist Tucker idealised the economy of the early colonial settlements in North America and advocated a return to this ideal. According to him, if the state were abolished and a complete laissez-faire market economy allowed to operate, competition would ensure that all goods sold at their labour-time cost and that the rate of interest fell to zero, thus eliminating profit and interest. He assumed that the competing units would be self-employed farmers and artisans or co-operatives formed by them. You want to introduce "worker-controlled firms, including large industrial plants", as another competing unit.

We agree that capitalism could not exist without a state but argue that capitalist exploitation occurs as a result of the normal operation of market forces. Profit does not arise from the state intervening to allow capitalist firms to sell their goods above their labour-time value, but from capitalist firms employing wage labour selling goods at this value but only having to pay their employees the value of their labour-power, which is less being determined by its cost of production. So, to eliminate profit, such an economy would not have to involve anyone working for wages. We must also doubt whether in such an economy the rate of interest really would fall to zero as that would assume that lenders could be found prepared to lend their money at zero interest.

It is because capitalism is based on wage-labour that we talked about a theoretical non-capitalist market economy having to be based on self-employed farmers and artisans. It would also have to be an economy based on handicraft rather than industrial production. The reason for this is that where there is industrial production the work involved in turning the raw materials into a finished product is no longer individual, but collective. You yourself recognise this by introducing worker-controlled industrial firms into Tucker's rather smaller-scale economy (so, incidentally, conceding our initial point that an economy of small-scale independent producers could not provide enough to maintain the world's present population). But this would bring some inevitable consequences.

First, since industrial production can produce goods at a lower cost per unit than handicraft production, with complete laissez-faire, competition would eliminate most of the independent, self-employed artisans. In other words, industry would begin to be concentrated into the hands of the firms employing industrial methods of production.

Second, it wouldn't stop here. With complete laissez-faire, competition would result in those firms which employed the most productive machinery winning out against those employing out of date and so less productive machinery. So, there would be a tendency towards a yet greater concentration of industry into the hands of the big firms, which would get bigger even if still at this stage worker-controlled co-operatives.

But what about the displaced independent artisans and the members of bankrupt workers' co-operatives? How would they get a living? Would they not be obliged to sell their skills to the worker-controlled firms that had won out in the battle of competition? But if wage labour appeared then so would profits and exploitation even if these profits would accrue to the members of the worker-controlled firms. Some might be prepared to share these with their new employees, but the continuing competitive pressures would oblige them to give priority to investing them in new, more productive machinery so as to be able to stay in business and not go bankrupt themselves. In fact, this has been the long-run tendency with such firms under capitalism today, as with the kibbutzim in Israel and the various Mennonite enterprises in North and South America. They have begun to employ wage labour and orient their production towards making profits and accumulating these as new capital.

In short, even if it were possible to go back to the sort of economy Benjamin Tucker envisaged, the tendency with laissez-faire would be for capitalism to develop again. This is fact is openly recognised by his political cousins, the so-called "anarcho-capitalists", who see this a good thing rather than a bad one.

Having said this, we can accept that there has been a degree of over-centralisation under capitalism and that a socialist society could sensibly introduce some decentralisation, particularly of food production, but this would have to be on the basis of the common ownership and democratic control of productive resources and the consequent complete disappearance of the market, money, banks and the rest of the paraphernalia of buying and selling. Only on this basis can people democratically decide the degree of centralisation and decentralisation that corresponds to their preferences freed from the pressures of economic competition and market forces—Editors.
Posted by Imposs1904 at 4:59 AM No comments: