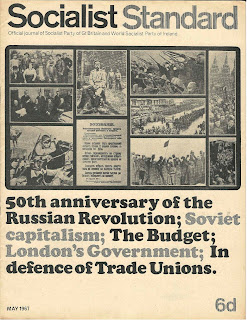 There is a delightfully vague phrase beloved of the left, meaning all things to all left wingers. They talk glowingly, emotionally, of "the fight for Socialism." The words roll from their tongues and dribble from their lips and probably there is barely a handful among them who have the slightest notion of just what the words mean.

This is equally true of the young left-wingers as of the old. Year after year, we hear them protesting about this act, denouncing that man, telling governments to do the other thing, and generally making a nuisance of themselves to the authorities. Such actions are all described as "fighting for Socialism", but if you listen to those concerned or read their literature, quite clearly Socialism is the last thing they would dream of fighting for. Yes, of course, the term is thrown about like so much confetti at a wedding, but never are its implications discussed as you will appreciate if you take a look at The Newsletter, the weekly organ of the Central Committee of the Socialist Labour League.

I got a copy dated March 25th; it was full of glowing reports on the discussion at the Young Socialist conference at Morecambe the previous week. "The delegates who assembled at Morecambe are much more politically mature than when they were expelled from the LabourParty in 1964" enthused the front page reporter. Well, let us see. In one resolution, Vietnam was described as the "cockpit of the world struggle of the working class against capitalism". In another on Rhodesia (which was passed unanimously) the demand was "arm the Africans; scrap the 1961 constitution". What maturity! Just how the cause of Socialism is to be advanced by such notions escapes us.

The paper is full of demands, recriminations, accusations and wild claims on the effect of the Y.S.; for instance: "They are rapidly being transformed into a hard core of revolutionary socialist leaders inside the Labour movement."

But perhaps their astounding capacity for self-deception is best illustrated by their assertion that " . . . Everyone can see that the reason why Wilson expelled the Young Socialists was because they were the first section of the labour movement to expose his treachery . . ." And what were they doing before they "exposed his treachery" (whatever that may mean)? Why, helping him into power of course! Political maturity? It's pathetic!

But of course the Young Socialists are not the only ones who are wholly headed. Labour M.P.'s seem to think you can have capitalism without its evils, and wax indignant when the system proves them wrong.

Take, for instance, the Hon. Member for Eton & Slough, Miss Joan Lestor. On March 13th, she voiced concern at the appearance of Navy recruitment adverts in children's comics and accused the Services of "seducing" young people. Yet what the devil does she expect? The armed forces have to compete with the rest of capitalist industry for manpower and of course will want to create a favourable image at as early an age as possible. They are not going to tell a youngster of the filth and mire he is likely to encounter during a forces career or of the blood and gore he may have to spill in various parts of the world. And in this they are doing no more or less than many other adverts aimed at catching 'em while they are young.

We agree, it is pretty horrible that killer adverts are aimed at kids, or anyone else, but if Miss Lestor objects, then the way to deal with it is to end all armed forces by doing away with capitalism; not  by urging some piffling reform like extending the option period for boy recruits from three months to six. Ah, but we forget, Miss Lestor is not in favour of abolishing capitalism—she is too busy helping to run it—and she certainly does not want to get rid of the armed forces. Rather does she want their image to be less objectionable; hence the grave concern that:

Including such advertisements in children's comics is bringing nothing but discredit on the armed forces. 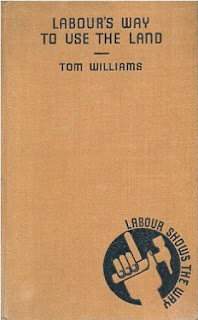 Book Review from the January 1936 issue of the Socialist Standard

This addition to the "Labour Shows the Way Series" is a useful contribution to "Labour's" main task of showing the capitalists the way to run capitalism. It deals, as its title indicates, with the agricultural side of capitalist production, and argues with considerable ingenuity that all the efforts of the other capitalist parties are and must be in vain, and that the millennium for the farmer, the farm labourer, and the consumer lies in the crania of the Labour "experts."

Well, we can leave the interested parties to fight that out. The madness of all these reformers has its methods, like other madness, but which is the best—or the worst—is of no interest to the Socialist.

The latter must criticise a work of this nature and origin from a different standpoint altogether. He sees it as the production of a sect professing—when expediency does not forbid—to be Socialist. His duty, therefore, is to "plunge the (Socialist) test-rod in" and "speak as he finds."

And in this case it must be unequivocal repudiation, for the book is nothing but a barefaced attempt to snatch political support from the farming element on one hand, and from the industrial and clerical wage-slave on the other.

The exposition of working-class politics should show that behind all this talk of organising the marketing of agricultural products lies the old, old story of the struggle between the industrial capitalist and the agriculturalist to determine how cheaply the latter can be compelled to feed the former's human cattle.

It should show that the industrial wage-workers are about as much interested in this struggle as the ox is in the bidding of rival butchers for his carcase.

It should stress almost beyond all things, that wages depend in the long run on the cost of food and other necessaries; and that therefore the attempt to inveigle them into this struggle between the producers of their food and the ultimate purchasers (who are their paymasters) is seduction pure and simple.

History provides confirmation of this in the Corn Law struggle of the middle of last century. With a heavy import duty on wheat, and the loaf at a shilling, the farmers were well off, and the manufacturers were not doing so bad. But the working class position was one of appalling misery. The sufferings of their wage-slaves so rent the tender hearts of the manufacturers that they nobly rallied to the cause of the bottom dog. They backed the demand for the abolition of the Corn Law. The law was abolished; and in a few years the workers were in just the same plight as before: their wages adjusted themselves to the "cheap loaf."

But the fortunes of the industrial magnates waxed marvellously, while those of the farmers waned in proportion.

The proposal to nationalise the land, and so bring the farmers into the direct service of the industrialists, as the Post Office workers are, may be sufficiently alluring to the hard-headed men of the soil to catch their votes—the present scribe cannot tell. But to all events, this land nationalisation is the only definite thing in the book. For all its criticism of the existing marketing schemes, it has nothing better to offer. A few pages of "constructive" wind and piffle, a list of "Boards" and "Commissions"—that is all. What these Boards and Commissions are to do, and how and when and why, we are not told. To venture any further than the author has done would have been dangerous, hence, as Educated Evans would have said, its all "gaswork."