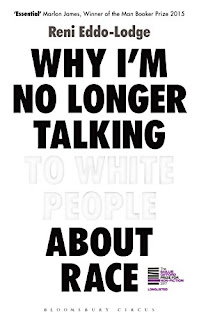 Book Review from the August 2018 issue of the Socialist Standard

Why I’m No Longer Talking to White People About Race. by Reni Eddo-Lodge (Bloomsbury. £8.99.)

Most people will be familiar with the idea of institutional racism, whereby some organisation (the police, maybe) discriminates against part of the population on ethnic grounds. Eddo-Lodge widens this to the concept of structural racism, which goes far beyond traditional institutions to cover much of society: ‘It is not just about personal prejudice, but the collective effects of bias.’

So black children do less well at school and are more likely than the general school population to be permanently excluded. Black university students are more likely than others to receive the lowest grade of degree. This discrimination continues into employment, with higher rates of unemployment among black people. Research has shown that applicants with African- or Asian-sounding names are less likely to be invited for a job interview. In contrast is white privilege: ‘if you’re white, your race will almost certainly positively impact your life’s trajectory in some way.’

The author also deals with the concept of intersectionality, which may involve black women being subjected to two kinds of discrimination, racism and sexism. Some object to this as a piece of useless jargon, while Eddo-Lodge sees the backlash against it as ‘white feminism in action’, which claims not to see race but in fact positions whiteness as the norm. Feminism, she says, should not leave anyone behind, and the most popular current versions of feminism may not able to achieve this.

A chapter on race and class sounds as if it might be interesting. It starts off by considering the Marxist analysis of class, but completely misunderstands this by saying that, if you are paid monthly and own your own home, you are middle class. But then it adopts the seven-class analysis of the Great British Class Survey, with black people mainly found in the more impoverished groups. The author says: ‘if you are born not white in this country, you probably haven’t been born into wealth.’ But this misses the obvious point that the vast majority of the population are not born into wealth. There is nothing here about the capitalists and the privileges they and their children enjoy.

Eddo-Lodge records that when she gave a talk about racism at a sixth-form college, one (white) girl asked, ‘When do you think we’ll get to an end point?’. Her response is that you cannot skip to the end point without having the difficult conversation first. But this is a very unsatisfying dismissal, and it is not even clear what she means by skipping to the end point. After all, you have to have an idea of what to aim for before having the difficult conversations that will help to get you there.

There is no doubt that racism is an important part of current British capitalism. This book says a great deal about how this plays out, but it does not go far in criticising the whole system.
Paul Bennett 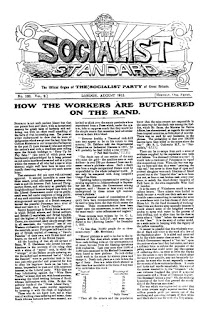 From the August 1913 issue of the Socialist Standard

"The Parliament of Man — the Federation of the World.” Thus sang the poet but it is not yet. The Parliament of our time is an assembly of traffickers in slaves of all colours but mostly white —of both sexes but of women increasingly.

During the past month the dockers of those busy ports, Hull, Leith, etc., have struck against the tyranny of the slave-owners. These most helpless of casual labourers, the men who congregate round dock gates for hours in the hope of obtaining a few hours slavery, found themselves faced by the majesty of the law — the law made by robbers to sanction robbery.

The representatives of mighty moneyed interests made demands for police and military, and the Liberal Home Secretary promptly ordered troops to the seat of struggle. "Reynolds’” (20.7.13) announced “Warships Ready,” not to fight the Germans, but the white slaves of the black international. This Liberal paper says: “Six gunboats of the mine-laying class have arrived at the port with several hundred men ready to be landed to protect life and property." The lives and property of the traders in flesh and blood. “The military and naval authorities are now acting conjointly in the matter’’—all in the interests of the shipowners and merchants who use Parliament so well to further their own ends.

The dockers at Hull and elsewhere will see these things repeated while they vote into power Liberals and their Labour and Tory allies, what time they rely upon an inefficient and out-of-date trade union to prosecute their economic struggles.

The Wilson family of Liberal shipowners boast of a generation's representation of Hull; of such is the blindness of Labour!

For many weeks the white slaves of the Black Country have been fighting for 23s. per week for wearing out their lives before furnaces and kilns and making wealthy the shining lights of the Liberal and Tory parties. After a sad and foredoomed struggle they have gone back to work on a compromise of 22s. per week.

Recently it was the girls and women of the adjacent towns and Cradley Heath who were driven to strike. These women, making chains of iron for those who hold them bound in chains more cruel than can be forged out of any metal, stayed out some weeks, until the Board of Trade; (in white slaves) settled the matter by ordering employers to pay "all workers except learners” the starvation rate of 2½d. per hour. When the lace workers of Nottingham rose against their death-dealing wage the same Trade Boards Act passed by the parasites’ Parliament fixed their ; wages at 2¾d. per hour for “all workers except ’ learners.” The tailoresses in the bespoke (better class) branch of the male garment trade were next treated to Christian charity in the shape of 3¼ d. per hour for ‘‘all workers except learners.”

It may, indeed, be truly said that the Trade Boards were used to make coffins for the toilers.

This same Parliament decided that 5d. per hour was a "fair wage” for the navvies building a new naval base at Rosyth The men struck for 6d., which was the local rate, whereupon the manager of the local labour Exchange proceeded to Dublin to hire the sous of Erin at 5½d per hour. Meanwhile the Irish Party of hungry politicians voted with the Government against enforcing any higher wage than 5d. To add to the irony of the situation, the men building the new naval base found the harbour held by gunboats sent by the plutocrats’ Parliament to shoot them if they deemed it desirable.

Space fills and time flies. I had intended to deal with the latest developments of what is sanctimoniously called "The White Slave Traffic,” the last hope of the beaten and broken derelicts of murderous industrialism. Another phase of the trade in white slaves arranged by Parliament—I refer to the white slaves of insurance—also demands attention, but both these must await a future issue.