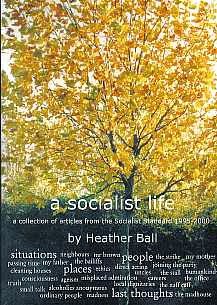 From the pamphlet, A Socialist Life, by Heather Ball

I grew up during the Second World War when paper was in short supply for such trivial items as books. Paper had to go towards the war effort. What books were available my parents could not afford to buy so they joined the public library as did each of their children as they came of age. My mother would sit furiously knitting, a book balanced on the arm of a chair, listening at the same time to the afternoon play on the wireless. I once asked her how she managed this trick and she answered, smartly, that the brain was designed to receive and process information on several different levels. Maybe, but the knitting suffered and so did I. I eventually wore the cardigans with the dropped stitches.

I have this memory of my father reading among other things Karl Marx, Freud and Jung. My brother read the P.G. Wodehouse 'Jeeves' stories. I thought them boring but I came across a Biggles Omnibus and Lorna Doone by R.D. Blackmore and enjoyed those. At the same time I found a Pear's Encyclopedia for nineteen forty-seven and dipped into that. Best of all I loved the William Brown books by Richmal Compton. To the consternation of my mother I began emulating William's bizarre behaviour. My mother reminded me that I was, after all, a girl, but suspecting a flaw in this argument I ignored it. Later I read the Bronte books and Jane Austen. I thought Jane Austen clever and amusing but thrilled with something akin to rapture at the antics of those tortured souls Cathy and Heathcliff in Emily Bronte's Wuthering Heights.

At that time Dad was doing his stint as a dustman and would occasionally return from work bearing books he had salvaged from dustbins (These days I put my fascination for rubbish dumps and skips down to the 'dustbin' era.) This way I got a schoolgirl annual full of stories about female pupils at boarding school who had midnight feasts in the dorm and whose vocabulary included ejaculations like 'Jolly spiffing'. For a time I longed to go to boarding school away from what I sometimes thought of as my 'weird' family. Dad said the children of dustmen didn't go to boarding school. But all this was before the advent of The Ragged Trousered Philanthropists.

A new chapter of my life began at that stage. The book appeared in the house when I was fourteen and I was not at first inspired to read it. It was a very dense-looking tome and a cursory glance through its pages told me that Mugsborough was a terrible place and I wasn't in the least bit interested in building workers. The male members of the family discussed it enthusiastically as a masterpiece. But my time was yet to come and when it did it was to steer the course of my life and my thinking.

On Friday afternoons at school the kids were permitted to bring their own books to read thereby providing the teacher with a quiet hour or two to sit at her desk marking exercise books. It also gave me an opportunity to take The Ragged Trousered Philanthropists to school with me to show off my 'grown up' reading. The teacher demanded to know what I was reading and told me 'This kind of reading matter is not for you'.

This kind of reading was for me. It came at a time when I badly needed to make some sense of the world. My class had been given a project - to paste pictures of the Royal Family into scrapbooks. This turned out to be a very popular and competitive project with pupils vying with each other to get the best pictures. I took no part in it. For one thing the Daily Worker had no photographs of the Royal Family within its pages and for another I thought it odd, to say the least, that children who sprang from parents who were forced to sell their labour and yet struggled to scrape together enough to possess anything other than the barest necessities should worship people who were rich, privileged and idle. Whilst I was reading Owen's response to the arguments of his workmates this concept lacked any logical train of thought. Feeling a sense of outrage I said as much to my teacher whose reply was that I should try to have a little more humility. I thought 'Fuck humility'.

My father gave me a book list - George Orwell, Jack London, Upton Sinclair, William Morris, and others and I read them all, but it was The Ragged Trousered Philanthropists that first raised my class-consciousness.
Heather Ball
Other short stories by Heather Ball can be found at the following links:

A couple of pieces relating to the aforementioned Robert Tressell

Pieces Together: Workers Waking Up (2010)

From the August 2010 issue of the Socialist Standard

WORKERS WAKING UP
"Zhongshan, China – Striking workers at a auto parts plant here are demanding the right to form their own labor union, something officially forbidden in China, and held a protest march Friday morning. Meanwhile, other scattered strikes have begun to ripple into Chinese provinces previously untouched by the labor unrest. A near doubling of wages is the primary goal of the approximately 1,700 Honda workers on strike here in this southeastern China city, at the third Honda auto parts factory to face a work stoppage in the last two weeks." (New York Times, 10 June)

A LOST TRIBE INDEED
"Northern Ireland's born-again Christian culture minister has called on the Ulster Museum to put on exhibits reflecting the view that the world was made by God only several thousand years ago. Nelson McCausland, who believes that Ulster Protestants are one of the lost tribes of Israel, has written to the museum's board of trustees urging them to reflect creationist and intelligent design theories of the universe's origins. The Democratic Unionist minister said the inclusion of anti-Darwinian theories in the museum was ‘a human rights issue’. McCausland defended a letter he wrote to the trustees calling for anti-evolution exhibitions at the museum. He claimed that around one third of Northern Ireland's population believed either in intelligent design or the creationist view that the universe was created about 6,000 years ago." (Guardian, 26 May)

CAPITALISM IN ACTION
"A boy aged seven has been found working 98 hours a week to produce decorative Christmas goods for the British high street. He is employed from 9am to 11pm, seven days a week, earning 7p an hour for his widowed mother. The boy, known only as Ravi, not only works but sleeps in a Delhi sweatshop that produces items for Poundland, the cut-price chain store." (Sunday Times,11 July)
Posted by Imposs1904 at 6:29 PM 1 comment: