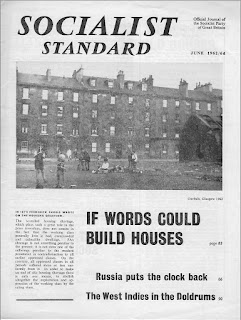 In the May Socialist Standard was reprinted part of an article on the Titanic disaster from the May 1912, issue. It recalled some of the unsavoury details of the tragedy—the desperate rush (in order to attract the rich transatlantic passengers) to break speed records for the crossing, which resulted in an insufficient look-out being kept; the much higher proportion of first-class than steerage passengers rescued; the officer who kept steerage passengers from the lifeboat with his revolver; and so on. Now another significant piece of evidence has come to light.

As the Titanic went down, many of those on board clearly saw a ship which made no attempt to come to the rescue. Afterwards, it was found that the liner Californian had been in the vicinity at the time of the Titanic's collision with an iceberg. At the subsequent enquiry the captain of this ship was censured for not going to the help of the Titanic, although he maintained to the end that he had never seen the Titanic's distress rockets.

Now the general secretary of the Mercantile Marine Service Association has claimed that it was the Norwegian ship Samson which saw the Titanic in distress at less than 10 miles range. But (according to a recent Norwegian TV broadcast, quoting the Samson's chief officer) this ship, which could have given invaluable assistance, then steamed away.

Why did it do that? Why did the captain and crew of the Samson so deny their common humanity with the crew and passengers of the Titanic as to leave 1,635 men, women and children to drown?

They steamed away "because they had been engaged in illegal seal hunting operations, and thought they were under observation by the American authorities.”

Having broken Capitalism's laws, they feared punishment' by the Capitalist state authorities. As so often happens, Capitalism forced these men to stifle their pity, and behave without compassion.

The whole Titanic episode, in fact, seems to offer a microcosm of the workings of Capitalist society.

Even for the Capitalists Fascism has its drawbacks. It makes wartime propaganda, about the defence of freedom, and so on, even more difficult to put across than it is in the democracies; and it is an expensive system—the secret police have to be paid, and to keep even one political prisoner in jail costs many pounds a week. So while the Fuhrers and Duces and Caudillos of Fascism strut vaingloriously on their balconies and puff out their chests before their gigantic rallies, each one knows at the back of his mind that he is there because he is doing a job for his ruling class.

Which is why General Francisco Franco, Caudillo of Spain, must be a worried man just now.

In Asturias 30,000 miners have come out on a pay strike. Franco has had to proclaim a state of emergency covering Asturias and the Basque provinces of Vizcaya and Guipuzcoa, where several thousand more workers have gone on strike. Altogether, more than 50,000 are involved. Students demonstrating in Madrid shouted support for the Asturian miners. and several were arrested, joining the 50 workers already reported to be in jail.

The crisis constitutes the most serious challenge to General Franco's regime since the end of the Second World War.
If the Government can get the strikers back to work only by force of arms, it is likely that the industrialists, who have for so long supported the regime without question, will lose some of their confidence in General Franco's ability to safeguard their interests.

And if the industrialists lose their confidence in Franco, there is no future for him.

Mr. George Wigg, Labour M.P., is worried about the state of the army. He thinks Britain does not have enough soldiers. And he does not hesitate to apportion the blame. Recently he stated forthrightly:

The responsibility for the state of the Army lies fairly and squarely on the shoulders of those politicians of both parties who took their decisions about Army manpower because it was politically convenient so to do and not in the light of Britain's defence needs.

Britain's Capitalist class need never lose sleep over the next war, while they have Labour M.P.s like Mr. Wigg to look after their “defence needs” for them.
Alwyn Edgar
Posted by Imposs1904 at 2:19 AM No comments: