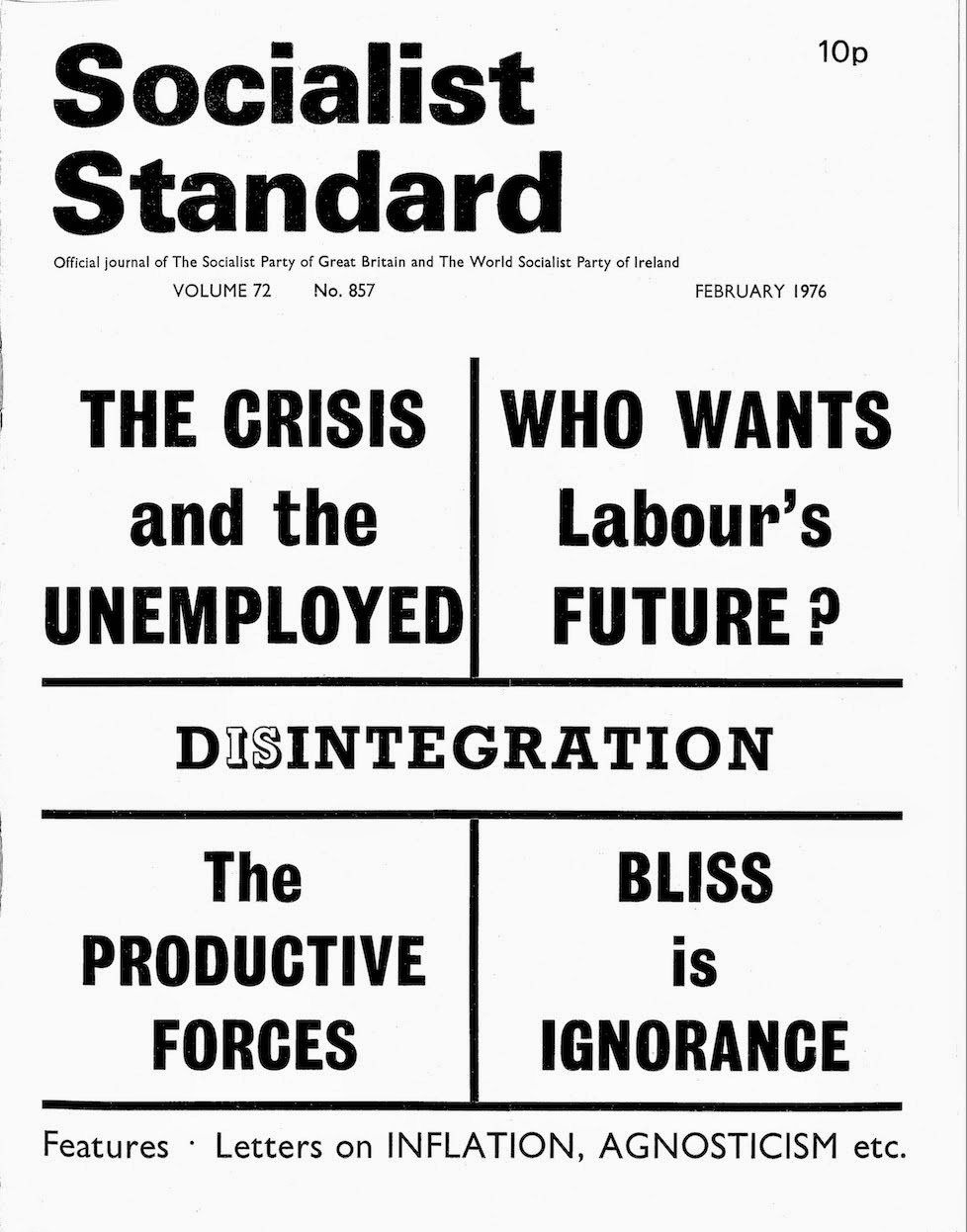 I was, of course, not the only one to leave the Communist Party. My main claim to distinction is that I was for many years a national official of the Young Communist League—its National Organizer, in fact. During most of the 'twenties I was the official representative of the YCL in Moscow, and subsequently, a member of the five-man secretariat of the Executive Committee of the Communist Youth International, the "Sanctum Sanctorum".

The manner of this was (as always) mainly the result of outside circumstances. You see, my older cousin, Fred Peet, was the acting General Secretary of the newly formed Communist Party in 1920, while Inkpin (the Secretary) was doing twelve months for publishing the Theses of the Third Congress of the Communist International.

Even as a fourteen-year-old kid I was a regular listener to the numerous meetings at Highbury Corner, near my dad's bicycle shop. There I heard Alex Anderson and Adolph Kohn—though the man who impressed me most of all of them was Charlie Lestor: he burst in on the London scene like a Canadian bison.

After mucking about in the Herald League for a bit I joined the CP in 1920, and was offered a job in the bookshop at 16 King Street. The Communist International was anxious to get a Communist youth movement going in Britain, and sent someone over to jog the CP into doing it. The procedure was quite simple. All CP branches were instructed to send delegates to a convening conference. This took place at the old International Socialist Club in East Road, City Road, in 1921. To my considerable astonishment, I was elected chairman. An Executive was elected, which at once appointed me National Organizer.

I should add here that despite (or more likely because of) my youth I had already taken to the outdoor platform, and made the grade as a Communist Party rabble-rouser. There were occasions when speakers didn't turn up (like now), or organized groups tried to break up the meetings. Up I jumped, and repeated most of what Charlie Lestor had said the last time I heard him. What was lacking in knowledge was covered by youthful enthusiasm; and at a comparatively early age I was in demand for meetings with the best of them.

I tried to look unconcerned when Zigi Bamattre (the Swiss CYI representative) announced: "You are coming back to Moscow with me." The gigantic upheaval in Russia had stretched out its mighty arms to Islington! In November 1922 I pinched myself to ensure that it really was me listening to Lenin and Trotsky in the marble and gold halls of the fabulous Kremlin in Moscow.

Rushed back to England, I did a speaking tour from Penzance to Aberdeen for six months, forming YCL branches (it was all done on one Tourist ticket costing £5). Back again to Moscow, to take part in the first major crisis for the British CP: the sacking of Inkpin and MacManus to replaced by Pollitt and Dutt.

So it went on for six years. Of course I knew the SPGB—hadn't I encountered those over-logical pests at many a meeting? At the Communists' 5th Congress there was an almost unique specimen—an SPGB-er who had joined the Communist Party, Frank Vickers from Tooting. I recall many times when members of the SPGB debunked my oratory: at Wood Green Corner, Tottenham, a little bloke murmured in my left ear "If they won't vote for it, they won't fight for it!"

A disturbing thought—but I was too busy predicting the imminent collapse of capitalism. In Moscow we were privileged members of the famous Dynamo sports club, with the best instructors and equipment: we were the golden boys, the Youth of the Revolution, destined to take over the world. Among them were Jacques Doriot, to become founder of the French Blackshirts; Liebknecht's son; and Naygen Ali Ivak, later known as Ho Chi Minh. In naval uniforms we lined up outside the Comintern building and marched back to the Lux Hotel singing "We are the Young Guard of the Proletariat".

Yet the writing was on the Kremlin's wall. 1925: struggle between Stalin and Trotsky. 1926: Trotsky's expulsion. 1928, and I resolved to return to England and refuse to accept any more paid employment in the CP. I did—I remember Eddie Fitzgerald, the translator of Mehring's "Life of Marx" saying to me "You must be mad! What job will a Communist agitator get in England?" I found a job as a foreign language telephonist (to be demoted by the Post Office when they found out).

There were the Great Depression and the National Government. Mosley's Blackshirts: Pollitt issued his call to break up opponents' meetings, and the CP formed the Workers' Defence Force, drilling with broomsticks in Epping Forest. I declared it ridiculous, and by 1934 was in active opposition to the Central Committee. I was summoned to a disciplinary court of the CP, to which the officials never turned up.

During this time I was still editor of the English-language edition of the CI's official monthly, the Communist International. When the Spanish Civil War started, Harry Pollitt asked me to go and see him: Would I proceed to Spain immediately as interpreter to the British battalion of the International Brigade? It dawned on me that all those in opposition to the CP's Central Committee were being cleared off to Spain, like my bosom pal Wally Tapsell who was shot in Galicia. It was to be a political execution. This was the end. To hell with you!

I obtained employment with the Workers' Travel Association as a courier, spending most of my time until the war in 1939 in Switzerland, Italy and France. Then, one balmy evening, I strolled in Hyde Park with a girl friend. We listened to Groves, Turner and Rubin on the SPGB platform destroying all the pretensions of the CP. This was it! I joined the Party the following week, and soon after that took the platform myself for the first time, One result of my advent was the discomfiture of the Communists who used to bawl at Party speakers: "Have you been in Russia?"

Theatre Review from the May 1998 issue of the Socialist Standard

Seeing a film or a play after an interval of several years is an interesting, and sometimes a very surprising, experience. We often seek out films and plays which we have enjoyed, only to find, occasionally, the second viewing very disappointing. A film which, first time round, made for a marvellous evening, now seems very ordinary; another which appeared exciting and unusual, has become bland and boring. Of course it isn't the film which has changed--unless that is we are now seeing it in miniaturised form on television, rather than in its full glory on a cinema screen. Most usually what has changed is that we have changed. We have "moved on", our perceptions. And what is true of films is frequently even more true of plays. Last night's revival appears slight and insubstantial, whereas an earlier production had us on the edge of our seats. What then of three new productions of well-loved pieces of theatre?
Joan Littlewood's production of "Oh What A Lovely War" at the Theatre Royal in Stratford East was, by any standards, an extraordinary theatrical event. Those of us lucky enough to see it are unlikely ever to forget its wit, pathos and savage irony. The experimental company at Stratford, which Ms Littlewood always saw as at the forefront of "people's theatre", wanted to do something about the First World War; especially the trench warfare that had extended from the English Channel to the Swiss border. But there was a problem: events on the Western Front were so horrendous as to defy being presented in a straightforward way. By basing the show around the songs of the period, and performing it as a typical end-of-pier show so popular both before and after the war, the Stratford company came up with an inspired solution.
I wish I could report that the National Theatre's touring production (due in Brecon, Telford, Dewsbury and Chester in May, and Richmond, Salisbury and Nottingham in June), was a worthy successor of the great original, but it isn't. The irony has been largely lost, and pathos and genuine sentiment has become mawkish sentimentality. Fortunately, some moments are so intrinsically powerful as to survive the flaws. But what in the original was a celebration of the bravery and the stupidity, the humour and comradeliness of the working class in the face of cupidity and the arrogance, the conceit and the chilling indifference of their "masters and betters", is now largely lost.
Much more successful is the revival of David Hare's Skylight, at the Wolsey Theatre in Ipswich. Perhaps the actors don't quite make the impact of the original London team (see Socialist Standard, May 1996), but this serves only to mark up the quality of the writing and it's contemporary relevance. Great as distinct from only good plays, are so rich in nuggets as to reveal themselves fully only over several sittings. In this my third visit I noted subtleties that had previously escaped me: perhaps especially on this occasion Hare's contention that the entrepreneur is also a victim of capitalism. Marx argued that society's values and standards reflect its economic nature, and here is Tom forever striving for more, impelled by the inevitable imperatives of the market; wanting more and more happiness as well as more and more wealth, and destroying his relationship with his partner in the seeking.
Finally, the Oxford Stage Company is touring widely with Wesker's Roots. (Guildford, Cheltenham, Oxford and Worthing in May.) This is a play for all seasons, a definitive and unambiguous classic. Beatie and her struggle to find her own voice is both an intensely moving personal story, and also a metaphor for the enlightenment of empowerment of the whole of the working class of which she is a member. Abandoned by her boyfriend and deserted by her family, Beatie thrillingly finds her own voice in the play's final moments. It seems the most exhilarating ending of any play in the English language. If I had enough money I would want to engage a theatre company and take Tressell's Ragged Trousered Philanthropist and Wesker's Roots on tour. Just imagine their impact!
Michael Gill
Posted by Imposs1904 at 12:51 AM No comments: