Weekly Bulletin of The Socialist Party of Great Britain 123

Welcome to the 123rd of our weekly bulletins to keep you informed of changes at Socialist Party of Great Britain @ MySpace.

"Everyone who knows anything of history also knows that great social revolutions are impossible without the feminine ferment. Social progress may be measured precisely by the social position of the fair sex (plain ones included)." Karl Marx, Letter to Kugelmann, 1868. 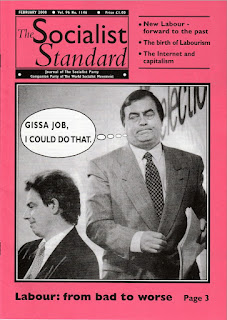 Editorial from the February 2000 issue of the Socialist Standard

The Labour Party, like Russia, is another issue over which history has done our job for us. In the past we had to argue that the Labour Party was not a socialist party and that its policy of step-by-step, piecemeal reform could not lead to Socialism.

Today, nobody thinks for one moment that the Labour Party has anything to do with Socialism. They see them, correctly, as just another bunch of politicians out to run the present system at national and local level.

In a sense, then, this editorial is redundant. We are pushing at an open door. Even so, on the centenary of the conference at which the Labour Party was conceived, it is worth recalling why the Labour Party has been the failure—in terms of transforming capitalism into something better—that it has been.

This has not been because its leaders were traitors or corrupt or incompetent—though some of them were—but because the task that the Labour Party set itself after the First World War (up till then its aim had merely been to get trade union bums onto the benches of the House of Commons), of gradually changing capitalism by social reform legislation into a new and different society based on co-operation, equality and meeting people's needs instead of on competition, privilege and profit, was an impossible one.

But, instead of Labour gradually changing capitalism, the opposite happened. Trying to reform capitalism changed the Labour Party into the out-and-out capitalist party it is today. Elected by a working class that only wanted improvements within capitalism, Labour governments found they had no choice other than to administer capitalism. But capitalism can only function as a profit-making system in which priority has to be given to profits over all other considerations.

Even Labour politicians learn by experience, and the experience of governing capitalism taught them to be "realistic" and accept capitalism's priorities. Under every Labour government ministers ended up defending profits. Blair and Gordon Brown only innovated by doing this before they came to power. All they did in openly proclaiming that Labour is a pro-business, pro-profit party was to bring Labour's rhetoric belatedly into line with its consistent practice when in office.

As Socialists we don't blame them for this. In fact, we can appreciate their honesty since, in putting the final nail in the coffin of the idea that Labour has anything to do with socialism, they have saved us having to spend too much time making this point ourselves.
Posted by Imposs1904 at 7:52 AM No comments: