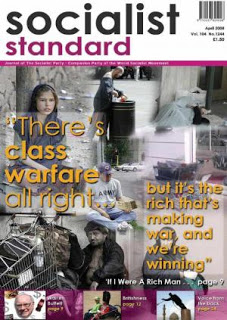 Editorial from the forthcoming April 2008 issue of the Socialist Standard

We don’t have to accept the self-fulfilling prophecy that “capitalism is the only game in town”.

Imagine that all the people in the world made a set of informed, collective and democratic decisions about what kind of system would best meet their needs and solve global problems. Would they choose a money and property system that forced nearly half their total number to try to survive on a dollar a day? Or would they prefer to organise production and distribution of goods and services on the basis of what they need, without the profit system?

Would they, if and when given the chance to vote, do so overwhelmingly for candidates who—whatever labels they attached to themselves or their parties—stood for the continuation of some form of capitalism? Or would they elect delegates, from among their own number, to initiate the process of setting up and running a fundamentally new form of world society, a system based on the common ownership and democratic control of the means of wealth production and distribution?

Would they embrace nationalism, involving armed forces paid to kill and injure other groups (“the enemy”) with whom they have no quarrel? Or would they regard themselves and behave as citizens of the world, regardless of any geographical, cultural or philosophical attachments they may feel?

Would they divide themselves into classes, rich and poor, leaders and led, privileged and unprivileged, dominant and submissive, superordinate and subordinate, master and servant, powerful and powerless? Or would they, despite individual differences in abilities, personalities, interests, tastes, likes and dislikes, think and behave as members of the one human race, not perfect, sometimes fallible or irrational, but never deliberately cruel or anti-social?

Whatever words they use to explain or sloganise their ideologies, all parties except the Socialist Party stand for the continuation of some form of capitalism. From their point of view, a vote for their own candidate is best; a vote for one of their competitors is second best. Not voting could be a worrying sign of alienation from the system. Worst of all, a vote for the Socialist Party candidate – or, where none stands, writing “Socialism” across the ballot paper – would indicate the beginning of a resolution to replace capitalism with socialism.

Don’t forget:
Before the first Labour government came into power, and when some members and supporters used to profess socialism as their eventual goal, there was some justification for the argument that: “The Labour hell is one degree cooler than the Tory hell.” So “Choose the lesser of two evils.”

Today, after successive administrations of the same system, the difference in temperature is too small to get excited about. The same applies to others lining up to be our government—the Lib Dems, etc. We don’t want them and we don’t need them.

Support for socialism isn’t a matter of campaigning to make the poor rich in today’s terms of material consumption. That wouldn’t be environmentally sustainable. The socialist aim isn’t even equality in the sense of sameness, like amounts of work contributed or goods and services consumed. Socialism is essentially about social equality, encouraging and enabling every human being to realise their full potential as giver and taker, not buyer and seller, in the context of society itself moving towards reaching its full potential.
Posted by Imposs1904 at 5:38 PM No comments:

Email ThisBlogThis!Share to TwitterShare to FacebookShare to Pinterest
Labels: April 2008, Editorial, R2008, Socialism and Democracy, The Vote Links to this post 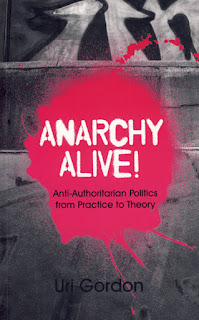 There are many currents of anarchism; some, often called anarcho-communist, hold political ideas not so different from our own. The course of the twentieth century, however, saw these currents fade, and by far the most common ‘anarchist’ today is the individualist or libertarian.

Because they start from the premise that individuals exist independently of society and that the freedom of the individual ego is the most important thing in the world, these anarchists have always had a problem with democracy. They have never been able to see why anybody should be bound by a majority decision; the individual must be free to ignore or even defy such a decision if he or she wants to, otherwise they would be being oppressed. That would be “the tyranny of the majority”. Some anarchists have been able to overcome this prejudice and try to practise democratic forms of organisation: but not Gordon, who launches a head-on attack on the whole concept of democratic control and accountability.


"“Democratic discourse assumes without exception that the political process results, at some point, in collectively binding decisions. That these decisions can be the result of free and open debate by all those affected does not change the fact that the outcome is seen to have a mandatory nature. Saying that something is collectively binding makes no sense if each person is to make up their own mind over whether they are bound by it. Binding means enforceable, and enforceability is a background assumption of democracy. But the outcomes of anarchist process are inherently impossible to enforce. That is why the process is not ‘democratic’ at all, since in democracy the point of equal participation in determining decisions is that this is what legitimates these decisions’ subsequent enforcement – or simply sweetens the pill. Anarchism, then, represents not the most radical form of democracy, but an altogether different paradigm of collective action”.

Socialism, on the other hand, does represent the most radical form of democracy. The socialist justification for accepting majority decision-making is that people are not isolated individuals but only exist in and through society, and that when there is a genuine community (either society as a whole or some collectivity within society) the best method of deciding what it should do, on matters of common interest to it as a community, is by a vote of its members after a full and free discussion. Of course the field of community activity has its limits and some decisions should be left to the individual (what to wear and eat, for instance), but we are talking about matters which concern the community as a community with a common interest.

Capitalism resolves the problem by leaving common goods (basically, the means of production) in minority hands, so there is no popular debate about their use; socialism holds these goods in common, under democratic control; the anarchist trend is to minimise these common goods by wanting them small scale and being anti-technology, which as we can now see is more to do with a failure to resolve the democratic issue than a particular dislike of technology per se. Why do these anarchists like laptops but hate computer factories? The answer is a dislike of democracy.

Gordon’s book is an attempt to give some theoretical coherence to the tactics and ideas of the anti-authority wing of the amorphous anti-capitalist and anti-globalisation movement. He openly admits they do not function democratically and is proud of it. They come together loosely – organise wouldn’t be the right word – in networks which do hold meetings with each other from time to time to discuss some activity. But those attending are not mandated delegates from their group, and no group is bound by any decision that might be reached; they are free to take it or leave it. Some do, some don’t. At demonstrations some will give out leaflets to the general public arguing a case, others will throw stones at the police. Hence the “pluralism” which Gordon celebrates but which is really a cop-out.

Gordon goes further and argues that no individual anarchist or group of anarchists should be held accountable to anyone for what they do; they are quite free to take any action they like and that is how it should be. In answer to Jo Freeman’s important 1970 pamphlet The Tyranny of Structurelessness in which she argued that the absence of formal, democratic structures leads to domination by informal elites, Gordon says “Freeman’s proposals run against the grain of anarchist priorities”. He sees nothing wrong with some informal group of anarchists taking the initiative, it being up to others to decide whether or not to go along with it. The latter seem suspiciously like followers to us but in Gordon’s eyes they are merely showing “solidarity” with the unaccountable group. He doesn’t seem to realise that the same might be said of those who vote for some capitalist politician or party.

Gordon also discusses other matters such as the attitude of anarchists towards violence, technology and nationalism, which are just as confused – or “pluralist” – as over decision-making. But his book is well-written and can be read on a know-your-opponent basis.
Adam Buick
Posted by Imposs1904 at 7:26 AM No comments: