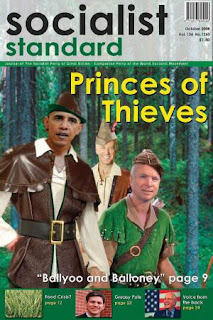 Editorial from the October 2008 issue of the Socialist Standard

The downturn in the global economy appears to be broadening and deepening. The sub-prime slime has became the "Credit Crunch" in 2008, and last month heralded a further round of casualties on what some are starting to call "Manic Monday".

US house repossessions started it all off, followed by mortgage lenders and banks in Europe. But more recently the US government felt unable to allow their Freddie Mac and Fannie Mae (public mortgage lenders) go under, but stopped short of baling out Lehman Brothers.

The contagious fear of vanishing profits extended beyond mortgages to insurance giant AIG and beyond, and the geographical spread has widened to China and Japan.

Workers could be excused feeling some sort of schadenfreude at the news of a bank running out of money or an insurance company failing to manage risk and hedge their bets. Who can fail to smile as another financial institution is found to have ignored its own advice ("The value of your investment can go down as well as up. You may not get back the amount of money you invested and should only invest sums of money you are prepared to lose").

So there may be fewer stories in the news of £100 burgers in the bistros or £30,000 drinks bills in the restaurants of the City of London, but of course the economic downturn impacts more on the poor than the rich.

World socialists are opposed to capitalism – boom or bust. Recession just helps throw into sharp relief the logic of the market system. It does however also provide a good opportunity to highlight some important differences between capitalism, and socialism – where money and wages would not exist and production of wealth would be based on meeting real human needs.

Firstly of course inside socialism there will be no work at all for the whole financial sector that is under such pressure at present. Pensions advisors, insurance salespersons, "independent" financial advisers, mortgage brokers, fund managers: all of these jobs are essential to the smooth operation of capitalism, but are socially-useless and would have no place in a socialist society.

Over 1 million people in the UK – 4 percent of the workforce – are engaged in such activities which are wholly useless. When you factor in related jobs such as accountancy, real estate, and ancillary financial services the numbers mount up. Socialism will really make these positions redundant, but with the pay-off that people will be free to engage in work that is genuinely productive and socially useful.

The market system is an incredibly wasteful mechanism for organising the production of wealth. It prevents people’s power over production. Interest rates rise in the US, and a hospital gets mothballed in the UK? The oil price rises and thousands of holidaymakers get stranded in a foreign country? The need for constant minute-by-minute re-evaluations of cashflow projections or return on investment expectations, for every project, every industry, every product results in a colossal waste of the planet's resources and humanity's energy and ingenuity.
Posted by Imposs1904 at 10:20 PM No comments: