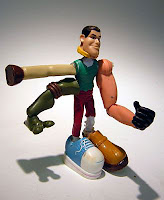 Book Review from the March 2008 issue of the Socialist Standard
The Real Toy Story. By Eric Clark
It is probably not very surprising to learn that the toy industry is very competitive, is driven by marketing considerations and is threatened by children’s growing interest in computers. However, Eric Clark does add some interesting further considerations.
The US toy and doll industry is a $22 billion business and is by far the world’s largest. Two big manufacturing companies (Mattel and Hasbro) and three big retailers dominate the industry, independent manufacturers and toyshops having mostly gone bankrupt or been taken over. The big retailers include Toys R Us and Wal-Mart, the supermarket chain that sells masses of toys as a way of getting kids and their parents inside the shops. Manufacturers are desperate for Toys R Us to survive, since without it Wal-Mart would be so powerful it would drive down even further the prices it paid to the toy companies.
Toys and dolls are also used to entice families into fast-food restaurants; McDonald’s is now the world’s biggest distributor of toys. Girls are apparently less keen on fast food than boys, hence the emphasis on toys aimed at girls being given out with meals for kids.
Toys are relatively resistant to ups and downs in the economy, as parents are reluctant to cut back on buying for their children. A rising divorce rate helps sales too, as both parents will be buying separately. Yet the toy industry has one great fear: KGOY, kids getting older younger and so losing interest in toys. This has been the case, for instance, with Barbie, the doll that now falls out of favour by the age of six or seven. A rival, Bratz, is aimed at pre-teens and features ever-skimpier clothes. As Clark says, this ‘is all part of the sexualizing of younger target groups for marketing reasons’.
Games are mostly made in the US and Europe, since their manufacture is highly automated. But toy production overwhelmingly takes place in China. This is partly because labour power there is cheap, of course: in the case of one electric toy that retailed in the US at $45, just 81 cents were paid in direct labour costs. But it also means that the suppliers, not the US-based toy companies, have to undertake the investment in factories and equipment and bear the risk of idle capacity at quiet periods. All this has backfired recently, however, with reports of toys made in China being dangerous and having to be removed from retail shelves.
Clark also observes that toys nowadays tend to ‘do everything’ and leave less and less to the child’s imagination and creativity. Under capitalism the innocence of childhood takes second place to the demands of marketing and profit-making.
Paul Bennett
Posted by Imposs1904 at 1:18 PM No comments: