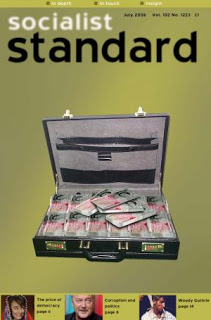 Editorial from the July 2006 issue of the Socialist Standard


It is sometimes argued that the kind of destitution and abject poverty that existed in the 1930s and earlier is no longer to be found in developed capitalist countries like the UK. Nowadays, the argument goes, workers take holidays abroad, have homes with several TVs and computers, and can spend large parts of their leisure time on shopping expeditions. It is fair to respond to these obervations by making two main kinds of point.

Firstly, that workers are in fact by no means as well off as such a sketch implies. In England alone, for instance, there are a hundred thousand homeless families, few of whom take holidays abroad.

Many migrant workers, here for fruit-picking, earn 70 pounds for a six-day week when various deductions are taken into account (Guardian 5 June). They cannot even afford to buy the strawberries they pick. The UK minimum wage is a mere 5.05 pounds per hour for those over 21, and around a million workers are on the legal minimum - few home computers for them. A couple of years ago, it was claimed by a trade union that employees in British supermarkets would have to work 94 hours a week to earn the national average wage.

So low pay is by no means a thing of the past.

Secondly, how well off workers are in terms of wages is not the whole picture. The insecurity caused by redundancies and the fear of redundancies, the short-term contracts now so widely used, the boring dead-end 'McJobs', the ever-present fear of production being moved to other countries with lower wage rates - all these undermine workers' sense of well-being. Nearly one person in six in Britain is described as depressed, while over a million are mentally ill and receiving incapacity benefit. Such is the stress and hassle of living under capitalism. At the same time hospitals close and trained medical staff are made unemployed, while overall levels of sickness show no sign of decreasing. The amount of debt is also an indication of how badly off workers really are. Eight million people have over 10,000 pounds of unsecured debt (that is, excluding a mortgage); a third of these say that their debt situation has had an adverse effect on their health or relationships. This year perhaps as many as 100,000 people will declare themselves bankrupt as a means of escaping from their financial problems.

Thus it cannot be said that capitalism has raised workers' living standards to a level where they no longer have to concern themselves with how high their wages are or how secure their position in society is. Poverty and worry about the future are built in to capitalism as far as the working class are concerned.

Moreover, if you take a global perspective, you can see that things are even worse. Half the world's population live on less than two dollars a day, and many on far less. Every day one person in five goes hungry. Over a billion people have no reliable water supplies and more than twice that number lack sanitation. Statistics like this can be multiplied for ever: the essential point is that an incredibly large part of the earth's population lead lives of numbing poverty and precariousness.

At the same time, a relatively small number of people are rich beyond the imaginations of ordinary people. A few hundred billionaires own as much wealth as the world's poorest 2.5 billion people.

The inequality which exists under world capitalism is simply breathtaking, and it is increasing: the world has never been so unequal as it is today. Governments exist essentially to defend the interests of the rich and powerful. Wars are fought to serve their interests too, whether to gain access to oil or to deny such access to others, or to open up some area to so-called free trade.

This is the way the world is. But it should not and need not be this way. Instead, the world could be run on Socialist lines, without rich or poor, without wages or money, without countries or governments.

If you think this sounds like a better way of organising things, contact the Socialist Party and see how you can help to bring it about.
Posted by Imposs1904 at 10:34 AM No comments: