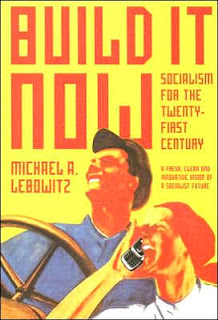 Book Review from Issue 21 of the World Socialist Review

Build It Now: Socialism For The Twenty-First Century by Michael A. Lebowitz

The circumstances encountered by those of us striving to build a socialist majority in the North today include a population made up almost entirely of people who have never known any form of society except for capitalism. Arguably, this is the greatest obstacle to building a socialist majority here in the United States, and has been so for many generations.

But in Venezuela, this obstacle does not loom quite so large. In a speech made on Dec. 15, 2006, Hugo Chávez claimed that the indigenous peoples in Venezuela had “lived in socialism for centuries,” and called them “the bearers of socialist seed in our land.”[2] (According to the Encyclopedia Britannica, about two-thirds of Venezuelans have some Indian ancestry.) In other words, the constituency who voted overwhelmingly for Hugo Chávez in 2006 is made up, in part, of people who can still remember another way of life. A case can certainly be made that the “circumstances directly encountered” by people striving to build a socialist majority in Venezuela are more propitious than what we Americans are used to.

Build It Now: Socialism for the Twenty-First Century gives us a fascinating look at contemporary Venezuela. Its author paints a picture of “a country which at the time of this writing embodies the hopes of many for a real alternative to capitalism.” (Introduction, p 10). Since most readers of this journal understand that the only two possible “real alternatives” to capitalism are socialism or barbarism, in this review I would like to address the question: “Is Venezuela under Hugo Chávez actually on the road to socialism?”

Lebowitz is a Marxist writer based in Caracas, and in Build It Now he makes many worthwhile points. One is that, once you understand the nature of capitalism, “you can no longer look at capital as this wondrous god providing us with sustenance in return for our periodic sacrifces. Rather, you understand capital as the product of working people, our own power turned against us.” He makes the case that we must “go beyond capitalism” if we want to end the exploitation of the working class; and states (p. 30):


The society to which Marx looked as an alternative to capitalism was one in which the relation of production would be that of an association of free producers. Freely associated individuals would treat ‘their communal, social productivity as their social wealth,’ producing for the needs of all.

The chapter entitled “The Knowledge of a Better World” contains some of the key points in the book. Lebowitz tells us:


Knowing where we want to go is a necessity if we want to build an alternative. But, it is not the same as being there. We live in a world dominated by global capital, a world in which capital divides us, setting the people of each country against each other to see who can produce more cheaply by driving wages, working conditions, and environmental standards down to the lowest level in order to survive in the war of all against all. We know, too, that any country that would challenge neoliberalism faces the assorted weapons of international capital — foremost among them the IMF, the World Bank, and imperialist power… We need to recognize the possibility of a world in which the products of the social brain and the social hand are common property… For this reason, the battle of ideas is essential.

It is easy to find inspiration in the following words, that Lebowitz addressed, in 2005, to a National Conference of Revolutionary Students for the Construction of Socialism in the Twenty-first Century, in Mérida, Venezuela:


We need to remember the goal. If you don’t know where you want to go, then no road will take you there. The world that socialists have always wanted to build is one in which people relate to each other as members of a human family, a society in which we recognize that the welfare of others concerns us; it is a world of human solidarity and love where, in place of classes and class antagonisms, we have “an association, in which the free development of each is the condition for the free development of all.” (pp. 64-65)
…We see that our productivity is the result of combining our different capabilities and that our unity and the common ownership of the means of production make us all the beneficiaries of our common efforts… (p. 66)
All of these characteristics and relations coexist simultaneously and support one another in the world we want to build. Democratic decision making within the workplace (instead of capitalist direction and supervision). Democratic direction by the community of the goals of activity (in place of direction by capitalists), production for the purpose of satisfying needs (rather than for the purpose of exchange), common ownership of the means of production (rather than private or group ownership), a democratic, participatory, and protagonistic form of governance (rather than a state over and above society)… (p. 66-67)

So, how can we build this world?

He suggests (in Chapter 2 and elsewhere) that this world can be built in Venezuela with the support of Chávez’s government. Lebowitz asserts (pp. 98 –99) that if the Venezuelan government under Hugo Chávez encourages “radical endogenous development,” e.g., “preparing people for new productive relations through courses in cooperation and self-management,” (which would be possible only for a government “prepared to break ideologically and politically with capital”), that can be seen as a step towards socialism.

Socialists have sometimes called government “the executive committee of the capitalist class.” For that reason, the World Socialist Movement does not envision any role in socialist society for government per se, but anticipates that the men and women living in socialism will devise some method of managing affairs, with the necessary administrative authority but no coercive power.

One must ask, can a government “prepared to break ideologically and politically with capital” exist in the present world? Can a socialist nation exist, surrounded by capitalist nations on all sides? Certainly, it must be pointed out, contemporary Venezuela is not an example of a socialist society. Although Lebowitz may have asserted, “We see that… our unity and the common ownership of the means of production make us all the beneficiaries of our common efforts,” there is really not, at this moment, common ownership of the means of production anywhere. (If there were, there would also be common ownership of the goods and services produced, which would imply free right of access to these things — but, as of this writing in 2007, Venezuelan citizens do not enjoy free access. It remains a goal to be achieved.)

On the other hand, this is not to say that they have not taken a step in that direction. “Radical endogenous development” could include building a socialist majority. Chávez has stated that as his intention. If that should happen, then a global Socialist Revolution would have a real chance of beginning in Venezuela.

“Socialism” with a qualifier
I want to take a moment here to talk about words. When Lebowitz speaks of “Socialism for the Twenty-First Century,” does he mean the same thing by “socialism” that Hugo Chávez does? Does either of them mean the same thing that we do? Over time, words change their meanings. When I was a child, for example, all wristwatches had faces, and when you said “watch” the concept called up was a circle of numbers with 12 at the top and 6 at the bottom. Since the advent of digital technology, “watch” no longer has that meaning. Now, if you want to refer to that kind of watch, you have to add a qualifier: “analog watch.”

In order to call up the concept of “socialism” as Marx used it in the 19th Century, it is also now necessary to add a qualifier. The qualifier is “non-market.” Without that qualifier, the word “socialism” means many different things to different speakers. Because I want to be crystal clear about what I mean by “socialism” in this writing, I will make a distinction between “non-market socialism” and “market socialism” (although I am aware that most people do not add "market" any more than people who wear a digital wristwatch add "digital").

Socialism is not a market economy. It is (as developed in Engels's Socialism, Utopian & Scientific) a society where money has become superfluous because the means of production are completely under social control. All labor is voluntary, everyone has free access to whatever goods and services are available.

Without importing goods from other nations, the people of Venezuela could never maintain an acceptable standard of living. No country in the world has all the raw materials necessary to do that, within its own national boundaries. Therefore, even if a socialist majority were to be created in Venezuela under Chávez, as long as there is a global capitalist economy, it could not establish non-market socialism. It could not become either moneyless or classless.

Perhaps Lebowitz has lost sight of this — or perhaps he believes that this aspect of Marxian socialism is not to be present in the Twenty-First Century version. He emphasizes, “I am convinced that worker management is the only real ultimate alternative to capitalism,” (p. 74), which implies he has forgotten that when the means of production are under social control, there is no more class of workers, and no more class of capitalists either. There are just people, all equal members of society.

Venezuela needs a money economy now to trade even with neighboring Latin American countries, let alone with giant imperialist states like the US; so, when one refers to “socialism” in Venezuela under Chávez — or in Cuba under Castro — what is really meant is “market socialism,” in which money is still used to regulate the exchange of goods and there is no common right of access. Moreover, the government of a “market socialist” economy (think: Cuba) is forced to exert coercive authority over people from time to time.

Will a conscious, political socialist majority in Venezuela put up with this? Or, freed from the logic of capital, will they take the next step and demand free access to what they produce?

Hugo Chávez himself, shortly after his election last year, called on his followers to dissolve their existing parties and to form a new “United Socialist Party of Venezuela,” which would provide a forum for discussing how to “construct socialism from below.”[3] The material conditions in the world are ripe today for a global Socialist Revolution, except for the lack of a majority of people who understand that non-market socialism represents a viable alternative to capitalism and are willing to commit themselves to making it work. Capitalism has wrought so much havoc on the ecology of Earth that the welfare of all human beings — capitalists as well as workers — is threatened. Not just the working class, but all of humanity, need to stop the engine of capital, if we are to survive.
The revolution has to start somewhere, and the indigenous Venezuelans who elected Chávez may yet set an example for the rest of the planet.