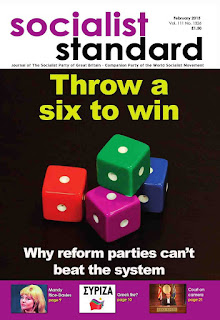 From the February 2015 issue of the Socialist Standard

Syriza emerged from the recent Greek elections as the party with the most votes. But what is it? And what does it stand for?

Syriza is the acronym of the Greek for ‘Coalition of the Radical Left’ and is made up of various left-wing and Green groups, including a part of the old Communist Party and some Trotskyists. It is a bit like Left Unity in this country which in fact aspires to be like them. Set up in 2004, it already emerged from the May 2012 elections as the main opposition party and topped the poll in Greece in last year’s Euro elections.

At the beginning of the campaign Counterfire (one of the SWP fragments) claimed that ‘Greece could be about to elect the most radical government of the left in Europe since the 1930s.’ This is presumably a reference to the Popular Front government that came to power in France in 1936 but the claim is open to question. If you examine Syriza’s programme it is far less radical than that of the government in Portugal that ruled immediately after the overthrow of the dictatorship there in 1974, than the ‘common programme’ of the PS/PCF government that came to power under Mitterrand in France in 1981, and arguably even than the British Labour Party’s 1945 election manifesto.

What is different is that some of the people who might end up as ministers and their top advisers are not the usual professional politicians and careerists but leftwing intellectuals like those behind Counterfire. Not that that will make any difference as to what they will be able to do in office.

One of them, John Milios, described as ‘chief economist of Syriza’ and one of their MPs, interviewed in the Guardian (23 December), declared ‘I am a Marxist … The majority [in Syriza] are.’ He himself is a Marx-scholar who has written extensively about Marx’s views, including his theory of crises. Presumably, then, he must have some idea of what’s involved in taking responsibility for governing within capitalism. In any event, the programme his interviewer recorded him as outlining accepted that a Syriza government would have to govern in the context of capitalism, and capitalism in a period of economic crisis and austerity:


‘Milios rolls off the party’s priorities one by one. It would make concerted efforts to help those hardest hit by the crisis – free electricity for Greeks who have had supplies cut off, food stamps distributed in schools, healthcare for those who need it, rents covered for the homeless, the restoration of the minimum wage to pre-crisis levels of €750 a month and a moratorium on private debt repayments to banks above 30% of disposable income.’

And, more generally, as he put it in another interview:


‘”We are going to boost growth and combat the humanitarian disaster.” Syriza’s recipe for boosting growth is through a fiscal stimulus, targeted at lower incomes in order to boost their spending power’(http://news.yahoo.com/greek-leftists-wont-run-deficits-policymaker-says-193856885.html).

Syriza is not even promising to run a budget deficit to ‘boost spending power’, only not to run a surplus as the outgoing government was planning. But it’s still based on Keynes’s discredited theory of ‘demand management’ which says that the problem in a slump is not enough spending rather than not enough prospects for profit-making.

A Syriza government might, by taking some of the measures outlined above by Milios, be able to mitigate a little the ‘humanitarian disaster’ in Greece where there’s been a massive increase in destitution leading to, among other things,  an increase in mental ill-health, suicides and the infant mortality rate. But it won’t be able to boost the accumulation of capital.

No Podeis
Meanwhile in Spain a similar party, Podemos (‘We Can’) has gone up in the opinion polls. Its policy is the same as Syriza’s, if perhaps a little bolder as it envisages some nationalisations. What they mainly have in common is a commitment to ‘boost growth’ by government action to boost consumer spending, as described in Left Flank (another SWP fragment):


‘Its analysis is that the crisis is fundamentally one of “under-consumption” (which [Podemos leader] Iglesias agrees is “the problem”) caused by mushrooming socio-economic inequalities under neoliberalism (including a sharp decline in wages’ share of GDP) – a view that overlaps with those of Thomas Piketty, Joseph Stiglitz and Paul Krugman. The solution is thus to increase consumer demand through expansionist public spending (àla Keynes). They then neatly tot up how exactly this can be funded though measures such as combating relatively high levels of tax fraud (mostly carried out by the rich), reintroducing inheritance and property taxes, and debt restructuring.’

It is not as if this has not been tried before. The PS/PCF government in France tried to ‘relaunch’ the economy in 1981 by increasing ‘popular consumption’, putting up the minimum wage and other benefits. It didn’t work. In fact it failed miserably, leading to three devaluations in two years and ending in a U-turn to a policy of austerity.

The reason why it failed – and why a Syriza and Podemos government would fail too – is that capitalism is not a system geared to meeting people’s needs, not even those they can pay for. It is a profit-driven system in which priority has to be given to profits and profit-making. Since the government cannot just magic into existence the resources to increase ‘popular consumption’, and that in the end these have to come one way or the other (taxation, borrowing, currency inflation) from profits, such a policy undermines the driving force of the capitalist system, provoking an economic crisis. Which was what happened in France.

There is another aspect to the breakthroughs achieved by Syriza and Podemos. They represent a revival of the old Social Democratic tradition of a reformist party using some Marxist terminology, at least in the two countries concerned. The equivalent of the Labour Party in Spain, the PSOE, is still called, believe it or not, the ‘Socialist Workers Party’ but, like the Labour Party and similar parties in other countries, has long since given up any idea of replacing capitalism and has settled for offering itself as an alternative team for managing capitalism in Spain.

That millions of people in Spain and Greece are prepared to vote again for parties that say they are against capitalism must mean something. Of course these are not explicit and deliberate votes for socialism but only for the parties voted for to do something about the effects of capitalism. This, however, is not something these parties will be able to deliver because it is not in their power to do so. They have been set the impossible task of trying to reform capitalism so as to make it work other than as a system that has to put making profits before meeting people’s needs and which periodically plunges the economy into crisis and depression.

There is no alternative under capitalism. The only way out is to get rid of it altogether and replace it with a system based on productive resources being commonly owned and democratically controlled, so they can be used to provide what people need in accordance with the principle ‘from each according to ability, to each according to needs.’