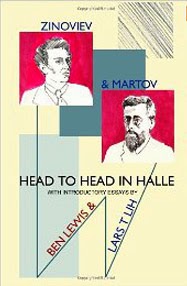 In October 1920 the Independent Social Democratic Party of Germany (USPD), which had broken away from the pro-war SPD in 1917 and which numbered amongst its members such pre-WWI Social Democrat tenors as Kautsky, Bernstein and Hilferding, met in Halle to decide whether or not to affiliate to the Russian Bolsheviks’“Comintern”or “Third International”.

The German authorities allowed the head of the Comintern, Gregory Zinoviev, to enter Germany while the Bolshevik authorities allowed the leading Menshevik Julius Martov to leave Russia, both to take part. Zinoviev spoke for over four hours in what Ben Lewis claims was “one of the most significant speeches of the 20th century workers’ movement.”

Lenin had justified the Bolsheviks seizing power in backward Russia on the grounds that this was only the first event in the world socialist revolution. He also justified the Bolsheviks using all means to stay in power –including suppressing opponents, invading Poland and stirring up a holy war against the West amongst Muslims, all of which Zinoviev defended in his speech –until they were rescued by the revolution spreading to Europe and in particular Germany.

In 1920 the leading Bolsheviks were still in this mode. There is no doubting their sincerity, only their judgement. Zinoviev’s main argument was that as the world revolution was under way you were either for or against the government of the one place where it had already triumphed. How divorced from reality he was can be gauged from his claim that in England “the beginning of the proletarian revolution can be clearly seen”.  He added, “I am convinced that in two or three years, it will be said that this was the beginning of a new era. The proletarian revolution has a great chance in England.”

In his contribution Martov argued that the workers in Europe were certainly discontented but that this was not an expression of socialist consciousness but of elemental despair. He accused the Bolsheviks of exploiting this to come to power instead of trying to turn it into the socialist understanding required before socialism could be established, a view which he claimed the USPD was committed to. Hence the title of his talk “May the USPD be preserved”.

Referring to Russia, he said that the Bolshevik party had “conquered state power in a country with a proletariat that was numerically insignificant, a country with an insignificant productivity of labour, with a complete lack of the basic economic and cultural preconditions for the organisation of socialist production - and these objective conditions presented the Bolsheviks with an insurmountable obstacle for the realisation of their ideals.”He went on to point out that “the development of the revolution in the West …is not going as quickly as the Bolshevik party had reckoned when it obtained state power through a fortunate confluence of circumstances and then used this power in an attempt to turn Russia into a socialist country by a radically accelerated path.”

The extent to which the Bolshevik leaders really did believe at this time that they were turning “Russia into a socialist country”can be gauged from a passage in an article included in this book that Zinoviev later wrote on his “Twelve Days in Germany”:

“We are approaching a time when we shall do away with all money. We are paying wages in kind, we are introducing free tramways, we have free schools, a free dinner, perhaps for the time being unsatisfactory free housing, light, etc.”

Zinoviev won the debate and a majority of the USPD voted to affiliate to the Comintern and become the Communist Party of Germany (the minority eventually rejoined the SPD). But within a year Martov was proved right about the Bolsheviks’ prospects in Russia. In 1921 they were forced to abandon trying to establish a moneyless society and to introduce the New Economic Policy, described by Lenin as “state capitalism”or the development of capitalism under the control of the “proletarian state”(as he called the Bolshevik regime). Four years later when he broke with Stalin, Zinoviev went further and described Russia’s nationalised industries as “state capitalism”(see Weekly Worker, 8 January, 1926) and was criticised by both Stalin and Trotsky for admitting this.

Lih says that Martov could be seen as a sort of “premature Trotskyist” in that he applied the same arguments to why the Russian Revolution would degenerate (economic backwardness and isolation) “to events and processes that the Trotskyist tradition treats in a more admiring way”- in fact from day one of Bolshevik rule.

Martov, wisely, did not return to Russia and died in exile in Germany in 1923. Zinoviev ended up being shot in 1936 as a “counter-revolutionary”, a victim of the same sort of terror and logic he had defended in Halle in 1920.
Adam Buick
Posted by Imposs1904 at 4:16 PM No comments: 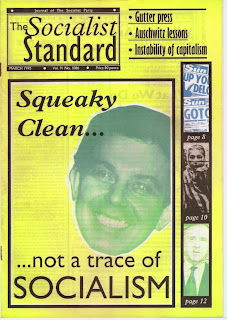 From the March 1995 issue of the Socialist Standard

According to Bob Rowthorn, economics professor at Cambridge University, interviewed in Red Pepper (December 1994), "we are stuck with money". He was answering a question from Hilary Wainwright who had correctly pointed out that "Marx argued that under communism money would be abolished".

In attempting to refute Marx's view, Rowthorn (a former member both of the old "International Socialism" group, the precursor of the SWP, and later of the now-defunct Communist Party) could only do so by projecting into a truly communist (or socialist - the same thing) society such as Marx envisaged, the economic needs and organisational requirements of capitalism.

This is most apparent when he argued that money is needed to enable people and communities "to buy and sell". But as the Communist Manifesto pointed out, socialism would dispense with buying and selling itself (and hence with the need for money). People will have free and unrestricted access to the products of industry (which presupposes a relatively high-level of production and a non-consumerist ethos) while contributing to the production process on an entirely voluntarist basis.

Rowthorn argues that "there has to be a basis on which to claim something in return for providing goods and services". But why? Where there is free access to such goods and services then the "need" to secure an economic return on your labour becomes redundant; you would work because you want to or because you would derive social esteem from such work, there being no other way in which you would derive such esteem. Status based on the conspicuous consumption of wealth would be meaningless. Indeed, Rowthorn's approach converges uncomfortably with the conventional apology for capitalism that "human nature" is essentially indolent, thus justifying economic coercion.

Finally, Rowthorn claims that money is indispensable because "you need a common unit of account to provide a standard of value". This argument was long demolished by Otto Neurath (1919) who pointed out that in a "natural economy" (socialism) there would only be "calculation in kind". The need for a "common unit of account" only makes sense as a yardstick of exchange value in the buying and selling system which socialism will abolish.

To assert that money is needed because the economy today is too complex to be "planned in a rational and coherent way" is to be distracted by the red herring of central planning. Central planning may well be a logistical nightmare but a relatively decentralised socialist society, operating without money and largely dependent on a self-regulating system of stock control using calculation in kind, is entirely feasible. And compared to the chaos and waste of capitalism, highly desirable.
Robin Cox
Posted by Imposs1904 at 3:37 PM No comments:

On 9 November it is the 60th anniversary of the death of the 'Welsh bard' Dylan Thomas, famous for his prose poem Under Milk Wood, and poems such as Do not go gentle into that good night and And Death shall have no dominion.

In 1934 Thomas wrote 'I take my stand with any revolutionary body that asserts it to be the right of all men to share, equally and impartially, every production from man and from the sources of production at man's disposal, for only through such an essentially revolutionary body can there be the possibility of a communal art'.

In 1933 Thomas had met ‘communist grocer’ Bert Trick in Swansea who became his mentor. Thomas visited Bert's grocer's shop in Brynmill which Thomas recalled in Return Journey: 'Bert Trick in the kitchen threatened the annihilation of the ruling classes over sandwiches, jelly and blancmange'. In 1933 Thomas writes of 'an outgrown and decaying system in which light is being turned into darkness by the capitalists and industrialists' and that capitalism because it 'seeks only profit for the few is not an efficient mechanism for satisfying the needs of the many'.

Thomas wrote that 'society to adjust itself has to break itself; society has grown up rotten with its capitalist child, and only revolutionary socialism can clean it up'. Later he writes 'If it can be forced home on the consciousness of the people that the present economic system is ethically bad, the seed has been planted that may in time grow into a fine revolutionary flower'. He saw society 'composed of financial careerists and a proletarian army of dispossessed. Out of the negation of the negation must rise the new synthesis'.

During the Second World War Thomas made films for the Ministry of Information such as A City Re-born which looks at Coventry and he says about war-time production that it 'makes you think what a hell of a lot they can produce if it’s for use and not for sale'.

After the war Thomas wrote two film screenplays; The Doctor and the Devils based on the body-snatchers Burke and Hare in which he portrays the class nature of society and Rebecca's Daughters based on the toll gate riots in Wales in 1843 in which he says governments only bring in reforms when they are 'afraid of a revolution'.

In 1952 on tour in America Thomas gave free poetry readings for the Socialist Party of the USA. He died in the Chelsea Hotel in New York City sixty years ago this month.
Steve Clayton