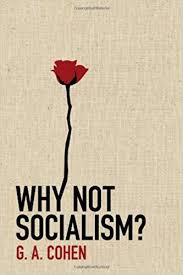 Why not socialism? By G. A. Cohen. Princeton University Press, 2009

This pocket-size 83-page book is easy to read and it’s easy to agree with some of what the author writes. But it’s hard to see him as he no doubt saw himself (he died in August just before the book came out): someone who understands the different between capitalism and socialism.

First the positive things in the book. These mostly centre around Cohen’s critical remarks about some aspects of capitalism: “I give as little service as I can in exchange for as much service as I can get: I want to buy cheap and sell dear”. And although he favours market ‘socialism’ he does recognise how similar it is to market capitalism: “exchange under market socialism is no less market exchange than it is under capitalism”.

Now the longer list of things to disagree with: “it is a familiar socialist policy to insist on equality of both income and hours of work”. No, that isn’t a socialist policy. In socialism there won’t be (money) incomes or insistence that we all work the same hours.

Cohen claims that socialism is infeasible “even if people are, or could become, in the right culture, sufficiently generous, we do not know how to harness that generosity: we do not know how, through appropriate rules and stimuli, to make generosity turn the wheels of the economy”. In socialism we shall treat each other as fellow humans not as commodities. It has nothing to do with harnessing generosity or turning the wheels of the economy.

“Market socialism does not fully satisfy socialist standards of distributive justice, but it scores far better by those standards than market capitalism does, and is therefore an eminently worthwhile project, from a socialist point of view.” No, it isn’t.

To sum up, Cohen writes of “We socialists.” But he should really say “We ‘market socialists’ who muddy the water about what socialism means…”
Stan Parker
Posted by Imposs1904 at 12:24 PM No comments: