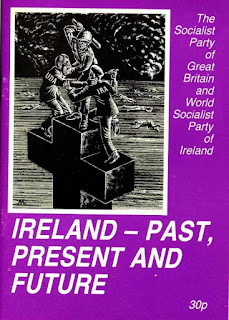 The Irish Question has been for centuries a constantly recurring problem for the British ruling class. Since the coming into being of a mass urban and industrial working class in the 19th century — and it must not be forgotten that a large proportion of the working class in Britain today are descended from dispossessed Irish peasants who were forced by starvation to seek work in Britain in the last century — the working class too have been dragged into this affair. In Britain it impeded and slowed down working class unity for trade union ends, but in Ireland the consequences were even more serious, especially in the North where tragedy is the only appropriate term to describe the hatred and killings perpetrated by different sections of the working class on each other.

This 24-page pamphlet, written by a member of the Belfast Branch of the World Socialist Party of Ireland, gives a materialist analysis of the course of Irish history from the colonisation of Ulster in the 17th century to the current situation, sparked off by the civil rights campaign of the late 1960s and the reaction of the Unionist establishment. It shows that what on the surface appears to be a religious conflict between Catholics and Protestants was basically an economic conflict over access to land, the main means of production before the advent of industrial capitalism. In the 17th century Protestant tenant farmers settled in the North, or rather were settled by the British state on lands that had been taken from their previous occupants, the Gaels, who were Catholics, thus creating an antagonism which, in the circumstances, naturally took on a religious appearance. In the South, where the Catholic land-owning class had taken the side of the Royalists in the English Civil War, the Catholic peasants had imposed on them by Cromwell a new-exploiting landlord class who were Protestant, absentee and, through their agents in Ireland, ruthlessly rack renting.

From this time on Irish social history is one of a land war, sometimes open and violent, always latent and simmering, culminating towards the end of the 19th century in the victory, in effect, of the peasant class. Faced with mounting peasant unrest, the British government decided to buy out the Protestant landlord class and re-sell the land to the peasants. This abolition of the Protestant ascendancy represented the end of the Irish land question, but it by no means meant the end of the Irish problem for the British ruling class for, in the meantime, with its problems and conflicts, capitalism had come to Ireland.

Largely because of the different systems of land tenure in the North and in the rest of Ireland, capitalism did not develop uniformly in the whole island. In the 19th century it developed primarily in the North whose capitalist class — in textiles, shipbuilding and related engineering industries — became an integral part of the British ruling class, geared to producing for the British and Imperial markets. In the South on the other hand, capitalism never really reached the industrial stage and remained linked to farming and servicing the towns. In other words, the fledgling capitalist class in the South had at this time a completely different interest from the mature industrial capitalist class in the North East. Far from wanting to remain linked to the British market they wanted tariffs to protect them from the competition of the British capitalists. The mass of the Catholic peasants who formed the majority of the population in Ireland were, by and large, able to enrol under their banner demanding “Home Rule", and so the Northern capitalists were faced with a very real problem. There was a danger of their being cut off from Britain and its markets and sources of raw materials and condemned to decline behind the tariff walls of an inward-looking and protectionist Ireland.

To resist this threat, they too sought a mass basis by playing the Orange card (as Winston Churchill's father, Lord Randolph Churchill cynically put it). This involved enrolling the Protestant farmer and working class majority in the North East under their banner of “Union" (with the rest of Britain) through exploiting the dying embers of Catholic-Protestant sectarianism. In the end they won their way. In 1922 Ireland was partitioned: 26 of Ireland's 32 counties were handed over to the political control of the fledgling capitalist class of the South, the remaining six to that of the Northern capitalists within the framework of the United Kingdom. As the pamphlet explains it:


No one making a dispassionate assessment of the situation that resulted in the establishment of two separate states in Ireland in 1922 can escape the conclusion that the primary cause of conflict was the imbalance of economic development between the north and the south. The struggle was about the political needs of the capitalist class in Ireland, and that class, and its political representatives, were willing to sacrifice the lives of the working class, in the north and the south, in defence of a system that offered the working class, as a whole, only the continuation of its poverty.

The two political regimes resulting from the 1922 partition did, in fact, rival each other in their openly anti-working class nature. By the 1960s however the original uneven development of capitalism which had led to partition was beginning to disappear: some industry had developed in the South behind the dreaded tariff walls while the traditional industries of the North were declining, and multi-national capital was seeking to invest in Ireland irrespective of the border.

In these circumstances, the sectarianism which had sustained Partition could have been expected to decline and eventually die away, and this was what the capitalist class both in the North and in the South hoped would happen. But this was to underestimate the extent to which they had successfully poisoned the minds of the workers they had enrolled as pawns in their previous political battles. Sectarianism proved not to be something that could suddenly be switched off by the flick of a finger. We will again let the pamphlet explain in its own inimitable style:


History bad provided the capitalists and their political representatives with the means of disguising from the working class the nature of the conflict. The South was overwhelmingly Catholic, the North mainly Protestant. The northern politicians swept the gutters of history and recruited the holy-men of the Church and the Orange Order to whip up a vicious reaction to the threat of Home Rule. Their southern counterparts used the same tactics to infuse a vicious anti-working class patriotism. The legendmakers and the liars were at work; money and effort were both available to imbue the working class with hatred, bigotry and patriotic rubbish and. sadly, the putrid concoction was to last until the present — to inflicts its miseries on a divided working class and, ironically, to disturb the sensitive political nostrils of the heirs of the class that had introduced it onto the political scene.

Sectarianism had never served the interests of the working class, but for a number of decades now it has no longer served, as it once did, the interests of rival sections of the capitalist class in Ireland. Today it is senseless from all points of view; yet it still persists since capitalism, with the artificial scarcity it maintains, encourages competition between groups of workers for the relative crumbs it has to offer them. The pamphlet ends by explaining socialism and how it is the only solution to the problems facing workers not only in Ireland but throughout the world. In passing we must point out a misprint on page 7. The Catholic Emancipation Act (which emancipated the Catholic capitalist class in Ireland, not the mass of the irish peasants) was passed in 1829, not 1823.

This pamphlet should be in the hands of every socialist and every other person who wants to understand the present situation in Northern Ireland. Its lively, forthright style and its unique point of view make it easy and fascinating reading.