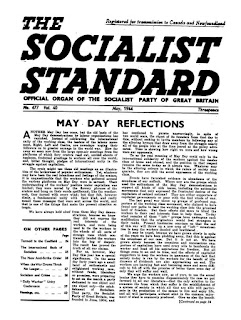 Four days after the Miners Federation, the coal-owners and the Government reached an agreement which it was stated would guarantee peace in the industry for four years, the South Wales Miners' Executive Council recommended to the delegate conference that they reject the proposals (29.3.44). It was also announced that day that 80,000 Yorkshire miners were on strike; only two weeks had passed since 91,000 miners had returned to work in the South Wales coalfield. Four years is a short period for a peace pact when compared with Chamberlain's “peace for our time," but when considered against the background of turmoil in the coalfields, it seems as though the miners' leaders are guilty of wishful thinking. Industrial peace like international peace is impossible in capitalist society and we can confidently state that should the proposals be accepted, they will last only a short time. Little has been said about them but the main features are wage stabilisation and simplification. How these proposals will guarantee peace is not shown; rising or falling prices will compel owners and workers to press for changes in wages. The disputes are resolved, sometimes by arbitration, often by strikes or lock-outs. The miners will discover that like all previous agreements, this will leave their poverty intact.

Underlying much of the recent trouble are the experiences from which the miners have suffered during the bitter struggles of pre-war days, and also that many know that an even more grim struggle lies ahead when the war is over. These experiences and this knowledge makes them hostile to the glib and complacent phrases of their leaders. An example of this was the strike in the S. Wales coalfield which started on March 6th and soon involved 96,000 workers; the miners went on strike against the advice of their leaders. The immediate causes are now fairly generally known. According to the Porter "award" all underground workers (adult) are to receive £5 per week minimum wage. Whilst the terms of payment were drawn up the £5 was made inclusive, i.e., that special allowances for working in excessive dust and water were to be discontinued and also an extra, charge of 1/6 per week was proposed for the "cheap" home coal that miners obtain as a "privilege." These proposals had the effect of reducing the increase to a mere 2/6 for many miners; some had less while piece-workers had nothing. The immediate result of the strike was to hasten negotiations and extract a promise that the anomalies created by the award would be removed. The editors of Fleet-street surpassed themselves in scurrility; from their offices they hurled terms such as "plain anarchy" "intolerable" "industrial sabotage" and "difficult and irrational temper" against the coal producers. The Labour press offered much sympathy but they also "deplored" the strike. From the Times to the Daily Worker advice was offered to the miner that it was in his interest to return to work; it seemed as though the only person blind to the miners' interest was the miner. The Daily Mail discovered cause for alarm in the fact that the miners ignored the advice of their leaders (13/3/44). Our hearts, however, are warmed to the miner who at a mass meeting in the Rhondda, when urged to follow the lead of the officials, yelled "Follow your lead? we will lead you." A sound attitude. The Daily Telegraph added to the lighter side of the struggle, and became comical in its rage; it complained that the miners were able to get their extra 9-oz. of cheese, although idle (14/3/44). So we lost not merely 300,000 tons of coal but also about 20 tons of cheese. An interesting light on capitalist impartiality was provided by the Manchester Guardian Weekly, With the strike in progress they reported: "As for the strikes there is no 'bold imaginative step' open except the appeal to loyalty and common decency" (10/3/44). Four weeks earlier their comment on the explanation advanced by the mine-owners for not paying the increase, was: "The owners explanation is logical enough " (11/2/44). Logic it would appear is the prerogative of the ruling class and its representatives when dealing with discontented workers, who apparently lack even common decency.

Mr. Arthur Horner made an attack on the "comfortable people" who speak in "contemptuous accents" of the miner, who Horner states: "is a sport; when things are bad he can take it on the chin" (Reynold's News 12/3/44). On previous occasions when miners have found it necessary to take industrial action their leaders were the people who helped to create prejudice and spread contempt for them. The following examples of mud-slinging are from Trade Union sources: Mr. A. Horner; "Anarchy in the coalfield," "Certain irresponsible elements" (D. Herald 18/10/43). Durham Miners' Association : "These unwarranted stoppages," "Sabotaging the war effort and assisting the enemy." and "Section of disruptionists." (D. Herald 18/10/43). We agree, Mr. Horner, these "smugly righteous people" should note a few facts.

A Word on Wages
The method of computing wages is extremely complicated, and is very confusing to anyone not connected with the mines; it has been described as "baffling the outsider." Piecework rates are fixed, sometimes by measure, sometimes by weight; there are allowances for working in excess dust or water and also a percentage addition that differs in each district. Because of this confusion there has been agitation for a simplified wage structure which it is understood will be obtained under the new proposals. We cannot see that it will be of any real advantage to the miners as even though the method be simplified the wages will still be roughly the same as before i.e„ barely sufficient to replenish the energies of the worker and to enable him to keep a family. It has always "baffled" the writer how people lived on the wages. We suggest that in place of the reorganisation of the wage structure the miners follow the advice of Marx and substitute "Abolition of the wages system."

While on the subject of wages it is interesting to note that the Economist had the distinction of making a most reactionary proposal:


"There may even be something to learn from the Soviet Wages system. Traditionally, the response of coalminers to increased wages is "heterodox"; above a certain level of earnings they are satisfied not to earn more by harder work. Increased wages should therefore not be guaranteed ay a flat rate. First the ratio between day wages and hewing pay should be weighted much more in favour of the latter, which is more dangerous, less attractive and more productive. Secondly, according to Soviet example, and contrary to the miners' own proposals, minimum wages should be left unchanged. Thirdly, increases in piece wages should be heavily weighted in favour of output above a certain minimum. Both time and piece rates should be made dependent on minimum attendance and minimum output. Should these fall below it, in the Soviet system, cumulative deductions are introduced. Thus the avenge wage of a miner would rise and fall substantially with output." (1/1/44. Our italics.)

One feature of the strike and its immediate sequel, the new agreement, was the critical attitude of the men to these new proposals and to their leaders. It has just been reported that the S. Wales miners' conference have rejected the proposals (2/4/44). Their attitude to it is that it is merely the "old meat—fresh gravy." It will become even more difficult for the capitalists to submit schemes for dealing with working-class poverty that will satisfy workers. The miners' exhausting toil has made wealth and luxury possible for the mine-owner—his toil has brought the miner only disease and poverty. They have worked hard so that their masters may live easily. They are now urged to forget the past, when their heavy work was no guarantee against poverty, and to work hard now, so that in the future, when the mistakes of the past will be avoided, we shall all enjoy prosperity. Hard thought, not hard work is required. Hard thought will show the miners and other workers the solution to their difficulties —the common ownership of the means of wealth production.