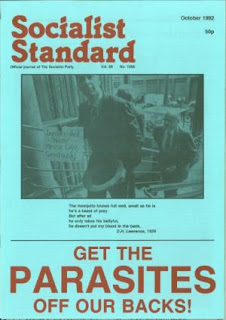 Editorial from the October 1992 issue of the Socialist Standard

If it was not tragic it would be funny. With a mixture of anguish and amusement, socialists look on as the multi-million dollar campaigns to elect the most important political leader in the world drip down the middle of our TV screens.

The US Presidential contest is a sick, slick manipulation of what is declared to be a democratic election. To begin with, only millionaires or those backed by millionaires can afford to run televised, mass-appeal campaigns. Most US states have laws designed to prevent small parties from even being on the ballot paper: tens of thousands of nominations must be collected before you can even appeal to voters as an electoral contender. The TV networks and the press are subsumed by the petty irrelevancies of which candidate has the most extra-martial liaisons, whose wife looks cutest and which party can provide the catchiest ten-second sound bite.

The election is a farce. Rarely was this more clearly seen that at the Republican Convention when Bush and Quayle accepted their nominations; their speeches were of the emptiest rhetoric, but crowds of media men were placed in the audience to cheer at their every empty promise, laugh uproariously at their every semi-witty jest and, most sinister of all, burst into pre-arranged "spontaneous" bouts of slogan-chanting, Goodbye Gorbachev, but Stalinism is still alive and well in the Houston Astrodome.

The differences between the two big parties are negligible—more minute than ever. Like the British Labour Party, the US Democrats have adopted the view that the only way they might beat the Republicans is by kidding the voters that they are the Republicans. Bush or Clinton—who in their right mind cares? Certainly tens of millions of American workers don't, for it is anticipated that half the electorate will not vote next month.

As in Britain, liberal reformists are tempted by what they see as the lesser evil. The Nation, that journalistic symbol of wishy-washy niceness, hopes that Bush will lose, but its editorial of 14 September shows just how pathetic the case for the Democrats is: "in almost every category of capitalist economic growth—income, profit, gross domestic product, employment—Democratic administrations do better than Republican ones". As if that were a reason why workers, whose exploitation is the source of capitalist economic growth, should vote for their most efficient fleecers.

The truth is that US capitalism is in trouble, and social problems which they thought they could avoid are exploding all over the place. Vast numbers of homeless, a drug epidemic, 12 million hungry, over 20 million illiterates, riots in LA and more brewing in other deprived city areas, a multi-trillion dollar budget deficit and the collapse of welfare, huge numbers of bankruptcies. What American workers need to hear is the case for an alternative to the profit system: the case for production for use and not profit. There will be no Land of the Free until we have a world where all have free access to the abundant wealth that we can produce.

But instead of the voice of sanity, the Republicans have been infiltrated by crazy Christians, no more in possession of their reason than the Muslim fundamentalists. Their leader, and a definite Republican hopeful for 1996, is Pat Robertson who told the Convention in Houston that feminism "encourages women to leave their husbands, kill their children, practice witchcraft, destroy capitalism and become lesbians". With God on their side these loony leaders are asking the millions to put their faith in them.
Posted by Imposs1904 at 10:32 AM No comments:

From the June 1962 issue of the Socialist Standard 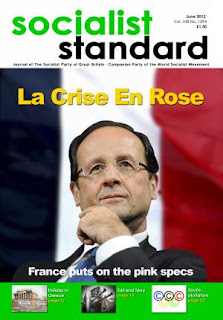 Chemistry at school has always had a dismal reputation as the boring science, which only gets interesting when it scales down into physics or up into biology. But a recent BBC Horizon documentary on the history of materials did an excellent job of correcting this prejudice by showing how new cooking recipes have been behind some of the most revolutionary technologies, from silicon and superconductors to graphene and even silicone. But one story stood out above all for its strangeness, the story of a material called Starlite, recently also picked up by New Scientist (16 May). Take some flour, baking soda and a few other sundries, whisk them up in a food processor, then paint the white gunge onto any surface and it will magically become impervious to temperatures up to 1000 degrees Celsius. A raw egg, covered with a thin layer of the stuff and then blowtorched for three minutes, remains raw and in fact not even warm.
This white paste, called Starlite by its amateur inventor, is the most efficient heat-resisting material anyone has ever discovered, and simple to apply to any surface. Nobody is entirely sure how it works. The fact that an untrained, non-scientist working alone in his domestic kitchen was able to come up with a formula that trumps all known products from established professional labs is not even the strangest part of the story. Even more bizarre was what happened next. The inventor, Maurice Ward, refused to divulge the recipe, afraid of course that he would be stitched up by capitalist manufacturers and their sharp-suited lawyers. History is littered with stories of inventors and discoverers not getting their due and Ward was justifiably determined that that wasn’t going to happen to him. He rejected every overture and stymied every proposal, obsessed with protecting his intellectual property rights.
Well, he protected them alright. One day he dropped down dead, taking his secret recipe to the grave. To this day nobody knows what went into making Starlite. It may never be known. The world has lost a wonder material.
For socialists the lesson drawn scarcely needs spelling out. Capitalism’s obsession with ownership has in this case indisputably prevented significant technological progress. It’s no good blaming Ward’s paranoia. He had every right to be paranoid. He was the golden goose in the shark tank and he knew it. People close to him have commented that it wasn’t even about the money. Ward just couldn’t stand the idea of being taken advantage of.
In socialism, with its culture of free cooperation and sharing, there is no conception of private property ‘rights’ in the first place. While it is not strictly impossible that one scientist might try to rob the credit for another’s achievement, there would at least be no money or power incentive for doing so. Without the corporate muscle that accumulated property can muster, third parties could scarcely be bought or intimidated into silence, so it’s unlikely that any such intellectual larceny could get off the ground, much less be sustained. Ward would have got the credit in socialism, no question, and we would all have got the gain.
A quiet revolution
On a more encouraging note, the concept of free access – the complete antithesis of the property ethic described above – seems to be extending delicate tendrils beyond the parent growth of computer software into the world of higher education. Some US universities including Stanford and MIT are opening up certain online degree courses, free to all comers. Given that a Stanford degree normally costs in the region of $150,000 this is a significant step. The logic, though, is simple enough. Once the course is devised, written and put online, costs of delivery fall to zero if no interactive sessions or manual marking is required, so what’s to lose? Free online courses won’t threaten the existing market for taught courses since remote or ‘distance learning’ doesn’t suit everyone, but the idea is catching on fast and it surely can’t be long before other universities follow suit.
What is really interesting is how the cheapness and ubiquity of online delivery is ‘normalising’ the idea of free access.  The change is not so much in promoting the idea of freebie giveaways, with which the world is already familiar, but more importantly in marrying the terms ‘free’ with ‘high quality’, a concept we are certainly not used to. Free software these days is top of the range, not cheap junk written in BASIC. Free apps are as good as anything Apple still hides behind its paywalls. Free information, in the form of Wikipedia, has proven as reliable as anything in commercial online encyclopedias. So ‘free’ and ‘quality’ are no longer antonyms.
This normalisation process in turn is changing expectations, giving rise to a modified sense of entitlement. It is this sense of entitlement, not just over computer software but over all resources, which the world’s population currently lacks and which socialists say they should have. Socialist revolution won’t be caused by stirring polemic about how bad or inefficient or even immoral the existing system is. It will be caused – perhaps it is already being caused – by a changed sense of entitlement, of what ‘normal’ ought to be. People who think it is ‘normal’ to have to pay for everything will not struggle to abolish the paying system even if they themselves suffer dire poverty as a result. But change what is considered ‘normal’, so that people come to expect that if something is worth having at all then it ought to be free, and you have the stirrings of a revolutionary mindset. The Occupy movement have been helpful in focussing minds on the telling inequality statistic of 99:1 but that isn’t enough.  More exciting is the quiet development of a new social norm, in which charging money for important and socially useful things begins to be seen as selfish, distasteful and somehow increasingly old-fashioned and obstructive.

Neither Westminster Nor Brussels But World Socialism (2015) 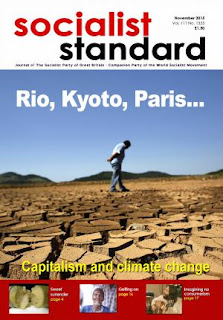