Obituaries from the April 1982 issue of the Socialist Standard

Arthur George
We are sad to report the death of Comrade Arthur George at the age of 69, just as he completed 50 years of uninterrupted membership of the Socialist Party. Arthur and his wife Phyllis joined the Party in the early thirties and became deeply involved in a host of propaganda activities. He was responsible for a number of his Post Office colleagues at Mount Pleasant joining the Party prior to 1937.

At the outbreak of World War II he was one of the members who became Conscientious Objectors, and had to leave his employment at the Post Office and work on the land. Being based in Hertfordshire he was able to live at home, and this made it possible for Arthur and Phyllis not only to maintain their work for the Party, but to increase it. Because of unsettled wartime conditions, much of the central administration was done from members' homes, and it is no exaggeration to say that Arthur's home at Golders Green was virtually the wartime Head Office of the SPGB.

During this period he was Central Branch secretary, and was largely responsible for the formation of Discussion Groups, then an innovation in the Party. On returning to the Post Office after the war, he became involved in the work of his Trade Union and was branch secretary for many years. He was also General Secretary of the Party. Later, when funds were at a low ebb, he became Party Funds Organiser, a job he carried out with remarkable success.

Our sympathy goes to Phyllis and her family whose sense of loss is shared by the members of the Party. We mourn a valued, loyal comrade and friend whose contribution to our deliberations and work will be sorely missed, but for whom there will always be a warm place in our memory.

*
*    *
Jack Hurley
It is with regret that we learn of the death of Jack Hurley at the age of 92. Comrade Hurley joined the Party in November 1931 and was active in the old Walthamstow and Leyton Branches. In his later working years shift work did not allow him to participate in Party activity as much as would have wished. On retirement he transferred to Central Branch and moved to Poole. Nevertheless his continued interest in the Party was demonstrated by his regular attendance, with his wife Pat, at Conference up to 1980. We extend our condolences to Comrade Hurley's wife and family in their bereavement.

Tony Mulheron
Many members and sympathisers here and overseas will be saddened by the death of Tony Mulheron. He had been in ill-health for several years.

Tony joined the SPGB in 1935 and, except for a brief disagreement over the party's attitude to the Spanish Civil War, remained a member of the end of his life. A brilliant speaker and debater, his flamboyant style and wit made him a joy to listen to. Although he had only the minimum of formal education he acquired a thorough knowledge of Marxist theory, which he applied to wipe the floor with numerous left-wing opponents.

The old Workers' Open Forum in Glasgow was Tony's favourite stamping ground. This was run by a committee of working people who for many years organised regular political talks and debates and Tony was a frequent and popular lecturer there. Such was the impact he made on many minds over the years that even to this day members will be stopped in the streets of the city by complete strangers and asked about "Mulheron".

In a brief address at the cremation Comrade Donnelly reminded those present that even on such a sad occasion socialists have no time for religious superstition: to a materialist such as Tony was, the only heaven and hell are the ones people make for themselves on this earth. This is why Tony's life was devoted to spreading the case for socialism. Those of us who knew him, especially in Glasgow branch, will remember him with affection and admiration.

We offer our condolences to his wife, Mary, and the rest of his family.
Vic Vanni
Posted by Imposs1904 at 3:57 PM No comments: 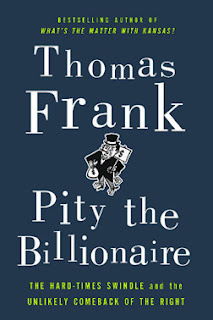 If you have been paying attention to the Republican primaries, you have probably been shocked by the low level of political debate in the US. Personal attacks, vacuous appeals to religion and the use of ‘liberal’ as a swearword seem to be the common ground in speeches and debates. In the book under review, Thomas Frank looks at the politics and tactics of the ‘newest Right’, as he calls them.

The banking crisis and recession have led, not to calls for more government control of the economy, but for less regulation and the introduction of a genuine ‘free market’. Despite the Reagan and Bush regimes, it is claimed by many that ‘true conservatives’ have never really been in charge and the market has never had a proper chance to impose its discipline on the economy, as there has always been some state interference.

The Tea Party movement is the most obvious manifestation of these ideas. Interestingly, Frank argues that the Tea Party is essentially based on small-business owners who see government regulation as a matter of time-wasting interference in their activities, in contrast to the checks and balances that were (to some small degree) imposed on the big banks. The smaller capitalists tended to borrow money against their homes, so the collapse of house prices left them far less able to borrow and made them look on with envy at the bank bail-outs.

Along with this is an ideology of individual responsibility, the view that those who make it succeed by their own efforts and those who fail and suffer deserve to do so. Where once communities might have rallied round to help someone whose home was being repossessed, now many people are pleased to see a person losing a home that they should never have tried to buy in the first place.

Frank shows how the Democrats have made no serious attempt to respond to these illusions. And he makes a valid point that the real role of the state is far from what the conservatives imagine: ‘neither federal nor state governments have ever mounted a campaign to intern the free-market faithful or blacklist the hardworking proletarians in the Chicago futures pits. However, they have used force over the years to break up strikes, imprison labor organizers, keep minorities from voting, round up people of Japanese descent, and disrupt antiwar movements.’
Paul Bennett
Posted by Imposs1904 at 8:45 AM No comments: