From its Wiki page:

"International Commemoration Day (ICD) for Dead and Injured takes place annually around the world on April 28, an international memorial day and action for workers killed, disabled, injured or made unwell by their work. In some anglophone countries it is known as Workers' Memorial Day."

The following article was cut and pasted from the British blog, Random Pottins, and relates to events in Britain but the same story could be told many times over across the world.

Remember the dead, Fight for the living! 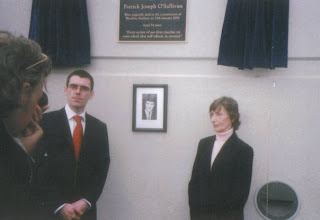 Remember the dead, fight for the living!

That's the slogan of International Workers' Memorial Day, which is April 28. It's a time to remember those like Patrick O'Sullivan, who went to his work as a carpenter on the Wembley stadium site one morning, 15 January, 2004 and was killed under a platform that fell 300ft. after it was hit by the load swinging from a crane.

Or Simon Jones, 24, decapitated by a crane grab in his first hour working at Shoreham docks, ten years ago.

Or the Chinese cockle pickers drowned in Morecambe Bay.

Or the many men and women who have suffered and died from mesothelioma and other asbestos-related diseases, before they could even see a penny of the compensation they had to fight for.

We might have thought things were changing from the days when dangerous work conditions and work-related illnesses and death were almost accepted. Certainly families, friends and campaigners are insisting their loved ones are not just statistics.

But while the media and, to their shame, some social commentators and academics, have gone on about the "nanny state", "compensation culture" , and "obsession with safety", facts assembled by the London Hazards campaign, Construction Safety Campaign and unions present a less comfortable picture.

There has been a 10 per cent increase in work-related illness, affecting 2.2 million people.

There have been six major incidents involving cranes in the last eighteen months, with three people killed. Monitoring of cranes for safety is still left to the owners.

Asbestos deaths have increased to 4-5,000 per year, and not only is it more difficult for workers with asbestos-related illnesses to prove which former employer is liable, but the government has ruled that the non-fatal condition pleural plaques does not entitle the sufferer to compensation.

The government has cut the budget for the Health and Safety Executive(HSE), thus reducing workplace inspections, enforcement and prosecutions. Some 9 out of 10 major injuries now are not investigated.

Thus April 28 is more than ever a time to also fight for the living, for those who might be tomorrow's victims, and for the right of working people to organise, elect their own safety reps - without those chosen having to fear victimisation - and if necessary, strike over safety and conditions. It is a time to demand the government reverses its cuts in safety provisions, and that its promises of "tough on crime, tough on the causes of crime" are applied to bosses whose negligence or cutting corners for profit can lead to the death of workers.

April 28 is a day when we should not only remember the colleagues we have lost, or seen suffering illness from work, but also think about what kind of conditions we are leaving for the next generation.

There are Workers Memorial Day events in many places. Two I know about are:

LONDON - gather 10.30 am. Holland Street, SE1, beside Tate Modern.
march to HSE, Southwark Street, for rally outside.
march then to City Hall, SE1 for rally with speakers.