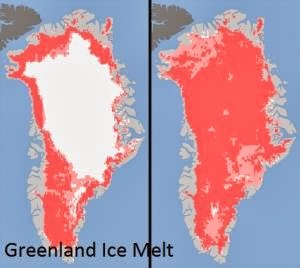 
At 5am on 27 September, after days of discussion at a plenary meeting in Stockholm culminating in an all-night session, the Intergovernmental Panel on Climate Change (IPCC) finalized its Fifth Assessment Report. Each successive report – the earlier reports appeared in 1990, 1995, 2001 and 2007 – has contained stronger predictions than the one before. Thus, the new report envisions sea level rise of up to one meter by 2100, as compared to an upper limit of 60 cm in the fourth report.

However, climatologist Michael Mann, director of the Earth Systems Science Center at Pennsylvania State University, points to ‘a credible body of scientific work’ suggesting that ‘business as usual’ emissions are likely to produce a sea level rise of two meters by 2100, submerging large coastal areas around the world. Professor Mann accuses the IPCC of ‘conservatism and reticence’ – failings he attributes partly to the caution inherent in the culture of science and partly to political pressures (even the IPCC’s report admits that sea level rise may reach two or three meters by a later date).

So preventing ‘dangerous’ climate change is no longer a plausible policy goal. Dangerous climate change is already upon us – a rather inconvenient fact for ‘moderate’ politicians who seek to reassure public opinion. Should they join the obscurantists who deny the science? Or should they espouse a more modest policy goal? But what exactly?

Implications of the ‘carbon budget’
Despite its vulnerability to political pressure, the IPCC has adopted a new concept with quite radical policy implications. The fifth report for the first time lays out a global cumulative carbon budget, drastically limiting how much more carbon – in the opinion of the IPCC – can be released into the atmosphere.

Diplomats are reported to be ‘concerned that discussions around a carbon budget could derail the already fragile process of negotiations on climate’ (Fiona Harvey, The Guardian Weekly, 4  October). Indeed, were governments officially to adopt this approach, they would be openly acknowledging that most known reserves of fossil fuels must be left in the ground. And, of course, they would also be acknowledging that it makes no sense to continue prospecting for new deposits.

This would mean a deep change in perception – oil, gas and coal would be seen no longer as precious wealth to be coveted, exploited and fought over, but rather as repulsive ‘filth’ threatening the health and life of humanity and the biosphere.

George Monbiot complains that for some reason governments just do not seem able to make this switch:

‘Press any minister on this matter in private and, in one way or another, they will concede the point. Yet no government will act on it… Governments everywhere are still seeking to squeeze every drop out of their own reserves, while trying to secure access to other people’s’ (The Guardian Weekly, 4  October).

To this one could add that for quite a few governments the exploitation of new hydrocarbon deposits remains the centrepiece of long-term national economic strategy. The Russian government, with its extensive territorial claims in the Arctic, is an especially striking example. They evidently fail to appreciate the irony in the fact that it is global heating itself that is making many of these deposits accessible.

Why so obtuse?
Why then are governments so obtuse? Is the logic underlying the carbon budget really so difficult for them to grasp?

As Monbiot discovered, government ministers as private individuals may understand the situation well enough. But the governments in which they hold office are not free agents.

The government of a country exists primarily to ensure optimal conditions for the accumulation of national capital – the wealth (value) owned by that country’s corporate and state capitalists – in competition with other national capitals. The process of capital accumulation is endless and serves no purpose outside itself.

A government that defies the imperative of capital accumulation in any significant way immediately comes under pressure so intense that it is forced either to change course or to resign. This is probably what would happen to any government that demanded fossil fuels be left in the ground, however profitable extracting and selling them might be to the companies concerned. Only extremely strong and persistent popular counter-pressure might give a government some room for manoeuvre.

The international climate negotiations may fail, but is that in itself cause for regret? So far these negotiations have achieved little of substance, apart from raising false hopes and creating new financial instruments for speculative profiteering. If talks break down because governments cannot accept measures that their own scientific experts tell them are necessary, that will starkly demonstrate that it has become impossible to reconcile the imperative of capital accumulation with the requirements of human survival.

A choice has to be made. It is no longer a matter of ‘socialism or capitalism’ or even ‘socialism or barbarism’. The choice now is between world socialism and global catastrophe.
Stefan
Posted by Imposs1904 at 11:53 AM No comments: 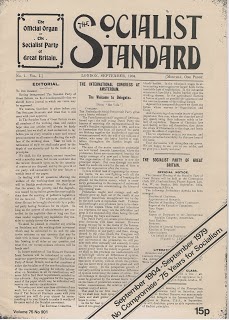 From the September 1979 issue of the Socialist Standard

The history of popular political movements is a story of the abandonment of political principles for the sake of mass appeal. A vote in the ballot box is worth two thoughts in the head. What would have happened to the Tory party if Peel hadn't tossed principles to the wind and issued the Tamworth Manifesto in 1836? Who would have bothered about Lenin if he'd have recognised the February revolution as Russia's 1789, instead of resorting to the Blanquist fantasy, the consequences of which have been far from anything resembling socialism? In recent letters to the Guardian members of the Labour Party have pointed out that commitment to Clause Four of their own constitution at election time would be inexpedient, as it loses votes. Kids at school are taught that to hold ideas strongly is 'extremism'; whereas to conform passively is euphemistically referred to as 'moderation'. This is the age of pragmatism—of treading carefully along thin lines. So far the political leaders have held their balance, but where has it got their followers?

Consistency of principle is one merit which even its greatest enemies grant the Socialist Party of Great Britain. It was founded in 1904 by men and women who opposed the minimum reform programme of the Social Democratic Federation and held that only socialist revolution would be in the immediate political interest of the working class. They were called 'The Impossibilists' by their opponents in the SDF because they refused to tread the political tightrope. The Declaration of Principles adopted by the Party's founders has remained unchanged for seventy-five years. An indication of dogmatism, sectarianism and sterility? Many have accused the SPGB of these things and hoped that, like shouting 'Nazi scum' at National Front processions, it should take offence and go away. But the criticism is an unjustified one, for what the Socialist Party said about capitalism in 1904 is no less true today.

There are still classes: 'those who possess but do not produce, and those who produce but do not possess'. This antagonism can only be abolished by 'the conversion into the common property of society of the means of production and distribution, and their democratic control by the whole people." This 'emancipation must be the work of the working class itself' and will 'involve the emancipation of all mankind without distinction of race or sex.' The necessary action is for the working class to 'organise consciously and politically for the conquest of the powers of government . . . ' so that the State 'may be converted from an instrument of oppression into the agent of emancipation . . . ' The Party standing for socialism must still 'wage war against all other political parties, whether allegedly labour or avowedly capitalist . . .' That, in a nutshell, is what the SPGB has said for seventy-five years. Apologists for capitalism tells us that such Marxist principles are hopelessly outdated. Meanwhile they cling to the depressing and ahistorical belief that social relations have never changed in any fundamental sense and that they will never change. Theirs is the obsolete philosophy of a stagnating, medieval world.

Hostility towards the SPGB from the Right has been because we understand their system better than they do. The Left's objection has been that we know what socialism is and refuse to accept phoney models. From the very start the Labour Party's reformism was shown to be contrary to the political interest of the wealth producing class. Six Labour Governments later the idea's beginning to catch on. The Socialist Standard was the first British publication to provide a serious critique of Russian state capitalism. The Party exposed Stalinism in the thirties, at the expense of meetings being broken up by members of the Communist Party—acting on official policy. No support was given to CND or any other 'reform capitalism—change the world tomorrow' campaign.

The Left has always cared more movement than direction. Building the party has always meant more than spreading ideas. In the early days of the International Socialism journal there were articles showing a real understanding of capitalism. But it was in the nature of the Leninist urge to let the vanguard do the thinking while the masses do the marching that IS became the SWP; demands for full employment have overtaken any thoughts of abolishing class society; and the conservative motto of 'A fair day's pay for a fair day's work' is well inscribed upon their banners, rather than the revolutionary slogan, 'Abolition of the wage system!' In the last election they advised their supporters to vote for Callaghan—who they said was as bad as Thatcher—in order to keep out Thatcher. After all this time one is entitled to ask, has all the expedient abandonment of principles, has the wider circulation of Socialist Worker on the basis that people think they're buying the Sun, has the descent to comic strip communism, been really worthwhile?

To a member of the Socialist Party the answer is clear. There may not be many of us, but at least we're in the party because we want socialism. Anyone who joins a branch of the SPGB must show such political understanding. It is only in this way that the retention of principles can be ensured. Some will respond, 'So what? You're very principled, but destined to be no more than a footnote in history.' It's true enough that there's nothing inevitable about socialism. Maybe the world will be annihilated in the struggle for market domination before workers see that the means of wealth production and distribution is there for the taking. Capitalism will not collapse of its own accord. The world's workers will probably be persuaded to support the system which oppresses them for some years to come. But the fact that a theory has not been put into practice does not mean that it is impracticable. The fact that human beings have the unique ability to think rationally does not mean that they will do so at all times. 'You can have the truth, but you've got to choose it' as Bob Dylan wrote. One day the moderation of today will be seen for what it is. And the impossibilists will be seen to have been the ones who spoke about reality.
Steve Coleman
Posted by Imposs1904 at 8:27 AM No comments: