Book Review from the March 2011 issue of the Socialist Standard

Socialists have always recommended Kropotkin’s Mutual Aid, including it on lists of books for sale. Kropotkin was an anarchist, but had been a scientist (geographer) himself and in this book was writing as science writer. It was originally written as a reply to T. H. Huxley, the biologist known as “Darwin’s Bulldog”, who had argued that both in nature and in human society “life was a continual free fight, and beyond the limited and temporary relations of the family, the Hobbesian war of each against all was the normal state of existence”.

Huxley was a biologist and an expert on Darwin’s views, but here was expressing a popular prejudice; in fact, more than this, a view that justified the division of society into rich and poor, oppressors and oppressed. As Iain McKay puts it in this pamphlet:


“In its most extreme form, this became ‘Social Darwinism’ which (like much of sociobiology today) proceeds by first projecting the dominant ideas of current society onto nature (often unconsciously, so that scientists mistakenly consider the ideas in question as both ‘normal’ and ‘natural’). … Then the theories of nature produced in this manner are transferred back onto society and history, being used to ‘prove’ that the principles of capitalism (hierarchy, authority, competition, etc.) are eternal laws, which are then appealed to as a justification for the status quo!”

Kropotkin produced the evidence from scientific studies to show that this was not the case, neither in nature nor in society. In nature a “struggle for existence” certainly went on, but cooperation (“mutual aid”) was just as much “a factor in evolution” (the book’s subtitle) as competition. It wasn’t just a struggle of members of the same species against each other to survive and so leave more offspring; in many species cooperation was a survival strategy with the less cooperative having less chance of survival and so leaving less offspring.

McKay goes into detail to show that many sociobiologists, including Dawkins himself, accept this, even if on the basis of mathematical models. Kropotkin can be seen as a bit of a sociobiologist himself in that he too argued from animal behaviour to human social behaviour. Only two of his book’s eight chapters are devoted to biological evolution, the rest dealing with human social behaviour and social evolution. However, these are governed by quite different factors that have nothing to do with genetics. But Kropotkin did at least turn the tables on the Social Darwinists by arguing that it was capitalism, not socialism, that was against human nature.

McKay’s 60-page pamphlet is a useful account of the background, significance and influence of Kropotkin’s book.
Adam Buick
Posted by Imposs1904 at 9:13 AM No comments: 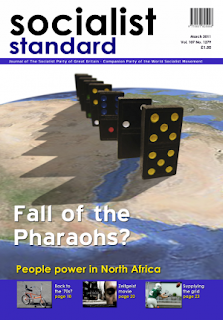 TV Review from the March 2011 issue of the Socialist Standard

Television is a “flickering fibbing machine”, according to uber-critic Charlie Brooker in How TV Ruined Your Life (BBC2). Using a snappily-edited mix of archive clips, flippant sketches and scalpel-sharp observations, his six-part polemic describes how manipulating and distorted television has become.

Brooker bases his argument on ‘Cultivation Theory’. This claims that if we spend too much time gawping at the goggle-box, then our expectations, morals and fears are more likely to be influenced by what we see on screen than what we experience in real life. For example, television has conditioned us to be frightened of dark city streets because this is the setting for so much televised violence. And, he argues, production companies have got away with this by presenting violence in a glossy, titillating way through public information films (“government-approved mini horror movies designed to fear you into not going all dead”) and scare-fests like Crimewatch and Wire In The Blood.

In his second episode, Brooker focuses on how different demographic groups are portrayed on television. Young adults are “mindless jigging gits”, dads are “tragic shuffling pitiful individuals”, and older people are “hilarious irrelevances”. TV encourages us to perpetually look youthful – and makes us feel inadequate if we don’t – through dross like the “devastatingly mean makeover show” Ten Years Younger. This trend manifests itself as ‘aspirational television’, where Brooker’s bile is focused in episode three. The theory behind aspirational programming is that “if you watch beautiful fun-loving people on TV you’ll somehow feel like they’re your friends, whereas in reality of course you’re essentially just a tramp staring at them from the other side of the room”. Some of his examples are jaw-droppingly unedifying, like My Super Sweet 16 UK. This docu-soap follows slappably-spoilt brats, including one who stages an X-Factor-style audition to judge which of his sparkly-eyed acquaintances are fit enough to attend his birthday party. How our relationships are influenced by television is the target of Brooker’s next episode. With hilarious bitterness, he shows us how television perpetuates the myth of ‘the perfect relationship’ through adverts that turn toothpaste into an aphrodisiac.

On first impression, it’s easy to dismiss Charlie Brooker as misanthropic and sneering. But his acerbic tone is really just a way of filtering out those viewers he would consider too shallow to appreciate his arguments. Buy into his style, and Brooker’s work is refreshingly perceptive, even exhilarating.
Mike Foster
Posted by Imposs1904 at 5:13 AM No comments: