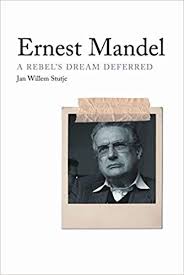 
How could anyone have seriously argued that the workers ruled in Russia?

Incredible as it might seem millions believed that Russia under Stalin and his successors was some sort of “Workers State”. Most – those in and around the official “Communist” parties – thought it was a workers’ paradise, socialism even. A minority – the Trotskyists – wanted to have their cake and eat it: to claim credit for what they saw as Russia’s achievements but to repudiate the things they didn’t like. They called it a “degenerate Workers State”. One of these was the Belgian journalist and academic, Ernest Mandel (1923-1995), a biography of whom by Jan Willem Stutje Ernest Mandel, A Rebel’s Dream Deferred has just been published in English translation by Verso.

“Workers State” is a bit of a contradiction in terms, but if it is to mean anything it would have to mean that the workers controlled the state; which could only be done through some democratic mechanism. But the workers never controlled the state in Russia. Within a few years of the Bolsheviks seizing power in November 1917 they had suppressed all other parties and established a one-party dictatorship. While he was a member of the government Trotsky justified the description “Workers State” by arguing that the Bolshevik Party, which controlled the state, was the party of the workers who therefore controlled the state through it. When, however, he and his followers were banned too he could no longer use that argument. So, in the Revolution Betrayed (1936) he came up with another: that Russia was still a “Workers State” because most industry was nationalised, there was central planning and a state monopoly of foreign trade. This, despite his admission that state power was actually controlled by a privileged “bureaucracy” and his producing statistics to show that the workers were badly off and oppressed

This argument was so absurd that it soon aroused criticism within the ranks of his own followers. Some refused to described a state in which the workers were oppressed and powerless as a “Workers State”. They disagreed about what to call it – some saw it as a new exploitative class society, others as “state capitalism” – but agreed that it wasn’t any kind of “Workers State”, not even a degenerate one. Trotsky stuck to his “degenerate Workers State” theory till one of its agents assassinated him in 1940.

Mandel had become a Trotskyist while still a teenager and during the war took part in underground Trotskyist activity in Belgium where his family lived. He was caught in 1944 and spent the remainder of the war in labour camps in Germany. After the war he emerged as one of the leaders of the Trotskyist “Fourth International”. One of the photos in this book is of a meeting of six leaders of this organisation in Paris in 1948. Of the six two had or came to regard Russia as state-capitalist. But not Mandel. He stuck to Trotsky’s dogma, and even extended it, describing the puppet regimes Russia set up in eastern Europe as “deformed Workers States”.

Dogma
In 1969, in a polemic against Michael Kidron, of the International Socialism group of Trotskyists (later the SWP) who argued that Russia was state capitalist, Mandel wrote:


“Ever since social-democratic opponents of the Russian October revolution hatched the theory of ‘capitalism’ continuing to exist in the Soviet Union, supporters of that theory have been faced with a difficult choice. Either they consider that Russian ‘capitalism’ has all the basic features of classic capitalism as analysed by Marx, to start with generalized commodity production, and that it also shows all the basic contradictions of capitalism, including capitalist crisis of overproduction— and then they have a hard time discovering evidence for this. Or they admit the obvious fact that most of these features are absent from the Soviet economy, and they then have to contend that these features are not ‘basic’ to capitalism anyhow, which in the last analysis only means exploitation of wage-labour by ‘accumulators’.” (The Inconsistencies of State Capitalism, p. 11).

As a matter of fact the social and economic system in Russia did exhibit the basic features of capitalism: minority control of the means of production (via nationalisation); generalised commodity production (i.e. generalised production for sale and the use of money); the accumulated of capital valued in money out of profits; and, in particular, yes, the exploitation of wage-labour by those who monopolised the means of production. Of course there were differences from what Mandel called here “classic” capitalism, due to the specific circumstances under which the system had come into being and developed which had resulted in a hugely increased economic role for the state. Hence state capitalism. In any event, even if Mandel’s narrow definition of capitalism as private enterprise is accepted, that would not make Russia into any kind of “Workers State”, only some new form of exploitative class society.

Disappointment
After discussing the “increasing rights for factory managers” then being granted as part of economic reforms introduced by the Russian government, Mandel declared:


“We are therefore convinced that capitalism could be restored in the Soviet Union or in any Eastern European country only after breaking the fierce resistance of the working class. ( …) Given the present constellation of social forces, both nationally and internationally, we think it very unlikely that this resistance could actually be broken under these conditions, and that capitalism could be restored either in the Soviet Union, or in Yugoslavia, or in any other bureaucratically degenerated or deformed workers' state.” (p. 16)

When this happened (and we, neither, saw this happening within twenty years) the working class put up no resistance to the transition from state capitalism to a more “classic” type of capitalism. Clearly, they did not share the same illusion as Mandel about Russia and its satellites being some sort of workers’ regime and so worth defending. Because Mandel and his Fourth International did believe the workers would resist, they placed great hope in the outcome of events in eastern Europe in the 1980s, trying to establish Trotskyist cells there. According to Stutje, they had some rather limited success in Poland and Czechoslovakia. But the outcome – a full return to “classic” capitalism rather than a regenerated “Workers State” – must have been a great disappointment. In fact, reading between the lines of this biography, Mandel never seems to have recovered from it.

Earlier Mandel had offered his expert advice as an economists to one of the “deformed Workers States” – Cuba when Che Guevara was Minister of Industry between 1961 and 1964. He visited Cuba a number of times and supported Guevara’s view that enterprises should be financed by direct grants from the central government and not be instructed to balance the books from their own activities. In other words, he was in favour of a much more centralised form of state capitalism than existed (or was eventually adopted).

Having said this, when it came to writing about “classic” capitalism Mandel was not too bad. In his Marxist Economic Theory (1962 in French, 1968 in English translation) he set out to show, on the basis of contemporary facts (and not just on the facts from the 1850s and 1860s that Marx had used), how Marx’s analysis of capitalism was still valid. The English hardback edition was divided into two volumes, the first of which, dealing with Marx’s theories, can still be recommended (the second part, dealing with the theories of Lenin and Trotsky and the nature of Russian society relapsed into Trotskyist scholasticism). His introductions to the Penguin edition of the three volumes of Capital are also good, as is his short pamphlet An Introduction to Marxist Economic Theory, even though it introduces the dubious concept of “neo-capitalism”, which he later called “late capitalism”.

Duplicity
Politically, Mandel was a dyed-in-the-wool Trotskyist, explaining every working class failure by a lack of the right leadership, i.e. of a Trotskyist vanguard. He also practised the dishonest Trotskyist tactic of “entryism”, joining the reformist Belgian “Socialist” Party in 1951, with a view to winning a leftwing following which he hoped to lead out of the party to form an open Trotskyist vanguard party. He achieved some success, even rising to be for a short while the editor of the BSP’s daily paper, Le Peuple. He lost this post when another paper he helped edit, La Gauche, criticised the party’s leadership. La Gauche advocated “structural reforms” of capitalism, basically the nationalisation of the holding companies which dominated the Belgian economy. This was popular amongst many workers in the coal, steel and manufacturing industries of the French-speaking part of Belgium, and Mandel managed to get the support of some of the union leaders and local politicians there.

According to Stutje, it was not until 1961 that Mandel told one of the trade union leaders that he was a Trotskyist:


“Until now Mandel had always kept quiet about his membership of the Fourth International. Now it was time to break the silence. He went to Yerna’s office and confessed to his bewildered friend, ‘I need to tell you the truth. I am a member of the Fourth International.’ Yerna was disappointed that his comrade had not trusted him sooner” (pp. 80-1).

In the end, as later with Militant in Britain, the inevitable happened. In 1964 Mandel and his followers were booted out of the BSP. In a letter to Ken Coates (then a fellow Trotskyist, later a Labour MEP) that year he told him: “A left wing had been built in the Socialist Party from 1961 on, accompanied by an autonomous, clandestine Trotskyist core group” (emphasis added).
According to Stutje,


“The question of when, where and how to leave the SP was clearly on the agenda from the early 1960s. Mandel had only wanted to make sure they left with a substantial group – and by that he meant thousands” (p. 85).

In the event, the main trade union leader he had relied on went off at a tangent and embraced Walloon (i.e. French-speaker) nationalism and Mandel left with a few hundred only. But a new bandwagon soon came along – student unrest – and he was able to jump on that, influencing student leaders such as Alain Krivine in France, Tariq Ali in Britain (both of whom became Trotskyists) and, to a lesser extent, Rudi Dutschke in Germany (who didn’t but, like Daniel Cohn-Bendit, eventually joined the Greens). Tariq Ali, though no longer a Trotskyist but still an admirer of Mandel, has written the foreword to Stutje’s biography.
Mandel was perfectly aware of what socialism really was as he had written in his polemic with Kidron:


“[S]ocialism means a classless society. It therefore presupposes not only the suppression of private property of the means of production, henceforth managed in a planned way by the associate producers themselves, but it also calls for a level of development of the productive forces which makes possible the withering away of commodity production, of money, and of the state.” (p. 17)

According to him, however, the productive forces had not yet reached the necessary level of development, so socialism was not an immediate possibility. Only a new society – based on nationalisation, planning and a state monopoly of foreign trade – was. He called it “transitional society” but it would only have been a form of state capitalism and state capitalism is not, as the experience of Russia in the last century showed, a step towards socialism. It turned out to be, in the joke circulating towards the end of the regime, “the longest route between capitalism and capitalism”.
Adam Buick
Posted by Imposs1904 at 2:11 PM No comments: