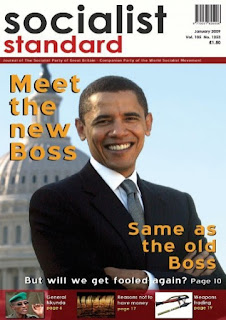 Editorial from the January 2009 issue of the Socialist Standard

We are now in the middle of the biggest economic and financial crisis since the 1930s. In a world that has the potential to produce enough food, clothes, housing and the other amenities of life for all, factories are closing down, workers are being laid off, unemployment is growing, houses are being repossessed and people are having to tighten their belts. There are in fact already 16 million officially recorded unemployed in the EU. Outside Europe the situation is worse and people are rioting because they can't afford even the basic necessities of life.

Capitalism in relative "good" times is bad enough, but capitalism in an economic crisis makes it plain for all to see that it is not a system geared to meeting people's needs. It’s a system based on the pursuit of profits, where the harsh economic law of "no profit, no production" prevails. It's because the headlong pursuit of profits has led to a situation where they can't make profits at the same rate as before that those who own and control the places where wealth is produced have gone on strike – refusing to allow these workplaces to be used to produce what people need, some desperately. So, as in the 1930s, it’s poverty in the midst of potential plenty again. Cutbacks in production alongside unmet needs. Why should we put up with this?

But that's the way capitalism works, and must work. The politicians in charge of governments don't really know what to do, not that they can do much to change the situation anyway. They are just hoping that the panic measures they have taken will work. In Britain the Labour government is trying to spend its way out of the slump, but this has been tried before and has never worked. The slump will only end when conditions for profitable production have been recreated, and that requires real wages to fall and unprofitable firms to go out of business. So, there's no way that bankruptcies, cut-backs and lay-offs are going to be avoided, whatever governments do.

What can be done? Nothing within the profit system. It can’t be mended, so it must be ended. But this is something we must do ourselves. The career politicians, with their empty promises and futile measures, can‘t do anything for us. We need to organise to bring in a new system where goods and services are produced to meet people's needs. But we can only produce what we need if we control the places where this is produced. So these must be taken out of the hands of the rich individuals, private companies and states that now control them and become the common heritage of all, under our democratic control.

In short, socialism in its original sense (which has nothing to do with the failed state capitalism that used to exist in Russia or with what still exists in China and Cuba) as a society of common ownership, democratic control and production for use not profit, with goods and services available on the basis of "from each according to ability, to each according to needs".
Posted by Imposs1904 at 3:46 AM No comments:

From the December 2008 issue of the Socialist Standard


Towards a better understanding of the world, in order to change it.

The world we live in is a world of contradictions. The environment is in a state of decline, yet industry continues to pump pollutants into the atmosphere whilst non-polluting technologies are neglected. Thousands starve, while food stocks remain unused. We can communicate with strangers from all around the globe, yet no-one knows their neighbour. Automation could free us from involuntary labour, yet we are chained to the machine. We live amongst vast material possibilities, yet poverty is the universal experience – not just in the narrow economic sense but also in terms of the quality of lived experience. “Never in history has there been such a glaring contrast between what could be and what actually exists” (Ken Knabb, The Joy of Revolution).

Central to all these contradictions and reshaping all previous antagonisms is the global commodity-capitalist system. A system characterised by the production of commodities, wage labour and the market economy. A commodity is what is produced by the worker under capitalist conditions, its purpose to reproduce and enlarge capital (stored surplus value). The pursuit of ever increasing profits is the driving force behind the whole process – the fulfilment of people’s needs is a secondary and not always occurring result.

Commodities are only available in exchange for other commodities, money being the universal commodity and measure of all others. Since all goods have been turned into commodities and access to non-commodified materials restricted, those without the means of producing anything to exchange must sell the only thing they have, their physical or mental labour-power. The logic of the market economy treats this labour like any other commodity; to be bought, sold and discarded as the market dictates. In effect the worker becomes a commodity. This transformation of living activity into an object creates an alienated or estranged world in which humankind does not recognize or fulfil itself, but is overpowered by the dead things and social relations of its own making.

Capitalist society is therefore split into two camps, the bourgeois or capitalist class (those who own and control the means of production – the land, equipment, machinery, buildings and raw materials necessary to create the things we need and use every day) and the proletariat (those with “nothing to lose but their chains”), broadly speaking the “modern working class” including the un-employed and unemployable. However the proletariat is not to be understood as a sociological category of people in such-and-such income group and such-and-such occupations, but as a social relation of capitalism. It is all those who have little or no means of support other than selling their physical and mental labour-power. The proletariat is the only class capable of ending class society, as it produces the material conditions of its own enchainment. However, both classes are subject to the laws of the market economy – our concern is with the social relation capital not the individual capitalist – the functionaries of capitalism are more and more disposable as individuals. While the rag-wearing classical proletariat of Marx’s time has all but disappeared, at least in the developed countries, the fundamental division remains; power and wealth are becoming more rather than less concentrated under the control of a small minority. The modern proletariat is almost everyone; it is the working class which must destroy both alienated work and class.

The “official” history of the working class’s struggle against capitalism is an inversion, what is presented as its greatest triumphs are in reality its most bitter defeats; Leninist “Communism” in the East and reformist “Socialism” in the West were both expressions of a general movement towards state-capitalism. The greatest tragedy of these times is that in the minds of the vast majority of workers the project for the dissolution of the commodity economy became associated with its exact opposite. “So the light darkened that had illuminated the world; the masses that had hailed it were left in blacker night… By usurping the name communism for its system of workers' exploitation and its policy of often cruel persecution of adversaries, it made this name, till then expression of lofty ideals, a byword, an object of aversion and hatred even among workers” (Anton Pannekoek, Workers Councils).

Though the call for a new society was never thoroughly extinguished; small and often profoundly isolated groups and individuals arguing the case for a social reorganization to bring free access and control of the means of production into the hands of the whole of humanity. “From each according to ability, to each according too need!”

The creation of such a society has two preconditions; firstly that technological production techniques have been sufficiently developed to be able to fulfil the material needs of the whole of society and secondly, that the majority of the population have an understanding of what needs to be done and want to carry it through. Revolutionaries are painfully aware that the first requirement has long since been reached but that the second is still far from being realized.

If we are to avoid repeating the mistakes of the past it will be necessary to develop a theory of revolutionary practice, a theory which seeks to “get to the root of all things” and improve them. It is not a matter of choosing from one of the pre-existing ideologies of the old workers movement and basing our world view around it, but a matter of finding the “moment of truth” in all the theories of the past and synthesising this with our experience of the present.

“Theory itself becomes a material force when it has seized the masses” (Karl Marx, Contribution to the Critique of Hegel's Philosophy of Right)
Darren Poynton
Posted by Imposs1904 at 1:02 AM No comments: