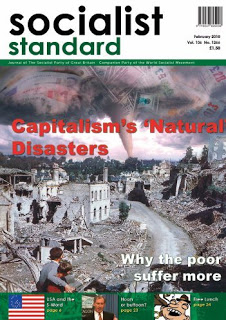 It ended well, the article in the Morning Star of 8 December: “The dream of a moneyless, socialist society can become a reality.” Unfortunately, the rest of the article, by Gerry Gold, contradicted this.

Gold, a supporter of the Old Labourite Labour Representation Committee, was offering a way out of the current crisis. No, he was not advocating the common ownership and democratic control of the world’s resources as the basis for going over to production directly for use instead of for profit and to distribution on the principle of “from each their ability, to each their need” instead of in response to paying demand.

What he was advocating was some radical reforms to capitalism such as closing down the Stock Exchange and outlawing hedge funds and derivatives and “replacing the entire for-profit financial system with a not-for-profit network of socially owned financial institutions providing essential services. Many examples of these already exist – mutually owned building societies, credit unions, the Co-operative bank”.

If there are still going to be financial institutions this is hardly making “the dream of a moneyless, socialist society” a reality. It can’t even be called a dream, just a sanitised reflection of today’s humdrum everyday existence, with the only noticeable difference being no banks on our high streets only building societies.

Gold went on: “With the elimination of private-equity shareholding and the abolition of speculation on the money markets the techniques developed by global capitalism can be used to clear payments between enterprises within and between countries. Accounting systems can be used and further developed to be open to public scrutiny.” Then followed the passage about a moneyless society.
Lenin used the same argument in Can the Bolsheviks Retain State Power?, composed a month or so before the Bolsheviks seized power:


“Capitalism has created an accounting apparatus in the shape of the banks, syndicates, postal service, consumers' societies, and office employees' unions. Without big banks socialism would be impossible. The big banks are the ‘state apparatus’ which we need to bring about socialism, and which we take ready-made from capitalism; our task here is merely to lop off what capitalistically mutilates this excellent apparatus, to make it even bigger, even more democratic, even more comprehensive. Quantity will be transformed into quality. A single State Bank, the biggest of the big, with branches in every rural district, in every factory, will constitute as much as nine-tenths of the socialist apparatus. This will be country wide book-keeping, country-wide accounting of the production and distribution of goods, this will be, so to speak, something in the nature of the skeleton of socialist society.”

His thinking was that if there was one big State ‘Bank’ it would be possible to account for the use of resources, and their transfer between productive units, without monetary exchanges. This was the view also of those other European Social Democrats of the time who realised that socialism would be a moneyless society and who thought about how production and distribution might be organised without money.

There may have been something in it, but it was never going to work in economically backward Russia. And it didn’t. After a period of so-called “War Communism” till 1921 when money was hardly used, it was Lenin himself who called for a return to money – and not just any old paper money, but a gold-based rouble. The Bolsheviks did retain state power, but the outcome was the nightmare of state capitalism.
Posted by Imposs1904 at 6:54 AM No comments: