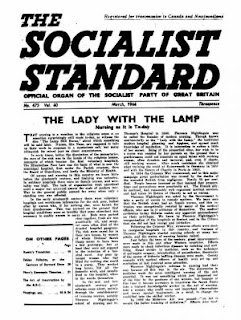 From the March 1944 issue of the Socialist Standard

When one listens to the numerous "Revolutionary’’ plays broadcast for the benefit of home consumers, as well as for the oppressed nations of Europe, one wonders if the ruling class is conscious of a possible effect of their propaganda. The strike as a weapon of the class struggle has always been a thorn in the sides of the ruling class, but now that there is a war on we find the ruling powers on both sides applauding strikes abroad and condemning those at home.

Nationalists, Monarchists, Right and Left Wing Patriots, Liberals, Democrats, Priests and Communists, all come in for their shares of praise for their work against Hitlerism. This heterogenous mass, who are undoubtedly helping to undermine the Nazi regime, are being praised as heroes of freedom, because they are doing what the "British ruling class" want them to do at present.

When listening to this B.B.C. propaganda one cannot help thinking how childishly simple are these plays. Those who take the part of Germans, either as S.S. leaders or Generals, talk as if they were blockheads, and yet these men are supposed to imitate the executives of the German ruling class—thoroughly trained and disciplined soldiers of what the Nazis believe is a new social order, and, moreover, what we have been given to believe is a most ruthlessly efficient system.

It is a bit ironical for those who remember how British interests supported Hitler in his early years, at a time when even his friend Mussolini mobilised his troops against the Third Reich. Again, when the B.B.C. tells us about Hitler's speeches and denunciations against Bolshevism, it carefully refrains from reminding us that the British ruling class for several years believed these fulminations, and preferred to back Hitler as the Policeman of Europe to prevent the spread of the "Red Terror"

Sabotage is a virtue if carried on in France, Belgium or Holland etc., but a crime if it takes place in India, according to the views of the British Government, and of course, just the opposite to the Nazis.

Many hints are broadcast from time to time to occupied Europe for the benefit of those who undoubtedly risk their lives for what they believe is the cause of freedom; but there is no intention behind the voice of the B.B.C. that a revolutionary change shall be made in the nature of society on the Continent.

That Conservative England should take a hand at such propaganda has its amusing side for Socialists, for are they not trying to run with the hare and hunt with the hounds? The speeches of Eden, Halifax and others have made it abundantly clear that the English capitalists look forward to their European markets after the war. which means that they hope and believe that capitalism, with all its privileges for them, and miseries for the workers, will continue to exist. But if the B.B.C. has any effect by encouraging the workers to print newspapers against the Nazis, and to blow up munition factories and power stations, in the occupied countries, Conservative England may well find that it has removed the Policeman of Europe only to find what it calls "anarchy or chaos" has replaced it.

Of course, there is always Russia to be taken into consideration. and as her present-day propaganda is far more nationalistic than England’s, we can console the B.B.C. that if they overdo this revolutionary stuff they will be able to rely on Russia putting the break on for them. Lenin is alleged to have said that it is one thing to start a revolution, but it’s another thing to stop it; and he should know.

So far as we are concerned all kinds of "revolutionary" activity may take place on the Continent after the war is over, with or without the B.B.C.’s contribution; but there are three things of which we can be fairly certain. Firstly, the ruling class will act along the line of its own class interest. Secondly, if the working class follow their example and adopt the principle of the class struggle, the ruling class of England (and Russia) will get very annoyed. Thirdly, unless the workers develop an understanding and desire for socialism, then all their struggles (so far as socialism is concerned) will have been in vain, and the B.B.C.’s plays and talks will merely leave them with but another, and perhaps modified, variety of capitalism.
Horace Jarvis
Posted by Imposs1904 at 10:56 PM No comments: 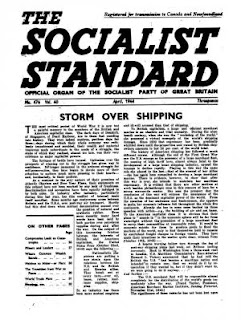 From the April 1944 issue of the Socialist Standard

The Socialist Party of Great Britain wishes to express its deepest sympathy with our miner fellow-workers. By the time this article appears, the struggle in South Wales will no doubt have been “settled.” Even in the extremely improbable granting of the strikers' full demands, the miner will remain one of the worst victims of capitalism. We speak as worker to worker. All of us in varying degrees have tasted the bitter pill of poverty and been under the harrow of callous employers.

We rejoice that the miner has not been driven so low as to be indifferent to the taste of the dirt of life offered by his masters, and explained away by his pastors.

The Daily Herald has offered you advice. It bids you “Go back to work; Trust your Leaders .”

The S.P.G.B. begs its comrades of the pit to review their history, especially in the light of this advice.

We appeal especially to those who are old enough to remember that staggering upper-cut delivered to the worker generally, and the miner in particular, in 1926 by Baldwin and “our beloved Prime Minister.” Never was the rottenness of the “Trust” advice more vividly shown up than by the General Strike.

The Daily Herald of May 30th, 1926, gave precisely the same advice, in the same words, “Trust your leaders.”

J. H. Thomas and others on the General Council were only too glad to seize on the previous “Samuel Report” (as useful as the “Porter Award”) to sound a retreat. Your own Arthur Horner (now slavishly toeing the line to the Government) wrote at the time, "The General Council betrayed the miners.

Six hundred years ago a youthful king promised an insurgent mob of peasants that he “would be their leader"; the history books your children read at school seldom mention the array of gallows which succeeded this promise.

Roman history relates how an aristocratic and privileged class bade the underdog of that time “trust their leaders,” though it was shown that the people's leaders were all too ready to act as the tools of the governing clique.

Consider the case of Ramsay MacDonald; fulsome adulation was accorded him by “Labour.” The S.P.G.B. alone saw the hollowness of the idol; it would be an unfortunate piece of history if there is likely to be a repetition to-day of something in the same line. Herbert Morrison (one of MacDonald's former supporters) is exhibiting the same vagueness of phrasing as characterised MacDonald—an astuter man than MacDonald, he may prove a real menace to the working class.

The News Chronicle has a cartoon (9/3/44). “Underground” workers are depicted listening in; one exclaims, “So the Comrades in Wales are letting us down?” We hear precious little about the owners who are “letting us down.” There is a clear way out to end the trouble. Accede to the strikers' terms. It is safe to say that the diminution of profits to owners would still leave that class sufficient to continue to live at a scale which would not entail the deprivation of a fur coat for the women folk. It outrages decency to know that the pitiably small increase to the miner would still be a matter of real relief to the heroic miner’s wife. Colliery companies are doing well. “Labour Research” (February, 1944) states that out of 32 colliery companies chosen at random, 27 paid higher dividends in the last five years than in the period 1934-38. Yet the Government, as it admits, is concerned to prevent miners’ wages and all wages from rising, on the specious plea of preventing inflation.

When the rank and file of the Unions cease to be gulled by the “leader” who too frequently is seeking to round his own life into a success, when a secretary becomes a servant and not a boss, the Trade Unions will be a big factor in assisting at the birth of SOCIALISM.

Fellow-workers of the pit: In Socialism alone can your degradation be liquidated. Don’t be misled as to what constitutes “Socialism?" Study the eight points of our “Declaration of Principles,” and be assured that our “Object” is no pious expression of impossible attainment. In the politically instructed worker lies the future hope of all mankind.