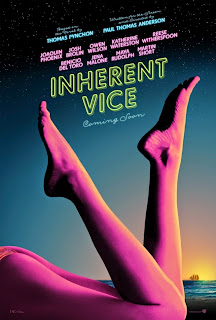 Film Review from the May 2015 issue of the Socialist Standard
The 2014 film Inherent Vice is a sunlit noir Counter-Culture mystery written and directed by Paul Thomas Anderson, based on the 2009 novel by Thomas Pynchon. Joaquin Phoenix is stoner sleuth Doc Sportello in Los Angeles in the Spring of 1970, the era of Timothy Leary when the doors of perception were wide open. The film is in the tradition of LA-set detective films where a man finds himself in a mystery he cannot comprehend or solve such as Polanski's Chinatown, Altman's The Long Goodbye, and Penn's Night Moves, although Anderson said 'Hawks's The Big Sleep is impossible to follow, but it doesn't matter, you just want to keep watching it, seeing where it goes, that's what I wanted from Inherent Vice.'
The film's title refers to a property in a physical object that causes it to deteriorate due to the fundamental instability of its components, making an item an unacceptable risk to a carrier or insurer. Churchill once said that ' the inherent vice of capitalism is the unequal sharing of blessings.'


Inherent Vice concerns property developer Mickey Wolfmann, who under the influence of LSD tries to go back on his capitalist ways: 'I spent my whole life making people pay for shelter, when I didn't realise it should've been for free.'
The blissed-out gumshoe visits a private 'sanatorium' and Pynchon refers to California Governor Reagan's 'privatisation' programme which involved the closing of state mental hospitals. Dr E Fuller Torrey inAmerican Psychosis: How the Federal Government Destroyed the Mental Illness Treatment System writes that Reagan associated psychiatry with Communism, and 'California became the national leader in aggressively moving patients from state hospitals to board-and-care homes.' Board-and-care homes became big business in California, and owners had financial ties with Governor Reagan. He was emptying state hospitals, and capitalist firms were profiting from it. Homelessness and criminalisation resulted, and homicides committed by mentally ill individuals who were not being treated.
Richard Nixon was in the White House, and the US government began the 'War on Drugs' with Operation Intercept to halt the flow of marijuana from Mexico, and the LAPD engaged itself in 'a long and busy day of civil rights violations' (Anderson). John Higgs wrote that 'the Counter-Culture was battered by the constant repression of the Nixon government.'
In anticipation of the 1970 California gubernatorial election, LSD proselytiser Dr Timothy Leary announced his candidacy for governor with the motto 'Come Together – Join the Party.' Leary said 'I'm going to legalise marijuana...(and) eliminate money from Californian society and return to a barter system' (Montreal Gazette 31 May 1969). According to John Higgs in I Have America Surrounded, Leary promoted 'extreme libertarian free-market ideals and utopian hippy fantasies.' Higgs points out that 'the idea of 'freak power', utilising the usually apathetic hippy mass as a democratic power base, had not been tested, but there were signs that it could emerge as a genuine phenomenon' which were seen in the Aspen Sheriff election when Hunter S Thompson stood as the 'Freak Power' candidate and narrowly lost. Nixon said 'Timothy Leary is the most dangerous man in America', and Leary's campaign came to an end in January 1970 when he was sentenced to 20 years in prison.
The shadow of the Charlie Manson Family murders hovers over the film, the trial began in LA in June 1970. Inherent Vice portrays LA as pervaded by paranoia where 'every gathering of three or more civilians is now defined as a potential cult', and one character asks 'What would Charlie do?'  'Groucho Marxist' Jerry Rubin said he fell in love with Manson's 'cherub face and sparkling eyes', Bernadine Dohrn of left wing guerrilla group Weather Underground declared 'Dig it! Offing those rich pigs with their own forks and knives, far out! The Weathermen dig Charles Manson', while Underground paper Tuesday's Child had a front page picture of Manson naming him 'Man of the Year.' Hunter S Thompson wrote 'bad craziness' was taking over.
In Inherent Vice the spectre of the schooner Golden Fang is a personification of 'The Man', which could be an Indo-Chinese heroin cartel, and symbolises the global narcotics trade as the invisible hand of unfettered, rapacious capitalism. Pynchon marks 1970 LA as the moment America let capitalism fly off the leash. In 1971 the cancellation of the direct convertibility of the US dollar to gold was replaced by freely floating fiat currencies which made 'Globalisation' easier through the free movement of capital around the world.
Even USA 'Founding Father' Thomas Jefferson speaks from the obverse of a nickel coin in Inherent Vice: 'the tree of liberty must be refreshed from time to time with the blood of patriots and tyrants', although his statements that people needed to be vigilant against any law that 'violates the rights of the individual' and 'that government is best which governs least' are more suited to the Counter-Culture.
The epigraph to Inherent Vice is ‘Sous les pavés, la plage!’ ('Under the paving stones, the beach!') from 'Les événements' of Paris 1968, to which should be added 'Soyez réalistes, demandez l'impossible' ('Be Realistic, Demand the Impossible').
Steve Clayton
Posted by Imposs1904 at 12:34 PM No comments: