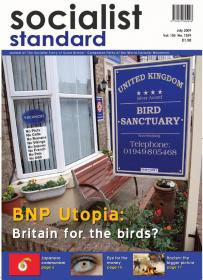 Editorial from the July 2009 issue of the Socialist Standard

The media has recently worked itself into a frenzy over the authority of the Prime Minister. The Euro-elections followed a spate of cabinet resignations. Every statement, coded phrase, nod and wink from the apparatchiks has been analysed. Whose side is Mandelson on? Will Milliband break ranks? And even, what's that badge that Blears is wearing? Kremlinologists used to try and find out what was happening in state capitalist USSR by analysing the seating positions of the party functionaries. A similar game of smoke, mirrors, cloaks and daggers appears to apply to the "democracies" of modern capitalism.

This focus on the minutiae of our leaders is what passes for democracy around the world. Democratic decision-making has become a spectator sport. We'd be as well reading our tea-leaves to find out what's happening. Jeremy Paxman could read the entrails of a chicken on Newsnight for all it matters. And as the column inches grow and the 24-hour rolling news channels multiply, year after year fewer people bother to vote.

It is in any case only every couple years or so that we get our hands on the stub of a pencil to register our pitiful preference. A few dozen crosses is your lifetime quota to express your opinion. In the time between voting, wars can start, economies may implode and climates change. And you can bet these issues won't all have appeared on the manifestos.

For world socialists, the presence of leaders is the antithesis of genuine democracy. The dominance of the market system must be removed before genuine participative democratic decision-making is possible. Crucially however it must not be forgotten that this is only achievable on the basis of majority support for socialism, by which we mean a moneyless, wageless, classless and stateless society based on producing wealth for human need not the profit of a few.

But while the democracy that capitalism provides (at least in most developed nations) is a pale imitation of the real thing, in our view it is usually still sufficient to be used to help bring about the end of capitalism.

That doesn't mean that such a transformation would be restricted to parliament (far from it – the transformation to socialism will obviously resonate across all parts of society, and in many different ways). But it does mean that any movement set on democratic revolution should not ignore the machinery of government but instead call the bluff of the democratic credentials of the capitalist state. Alongside many other developments in the wider revolutionary movement, politically we need to set out with the intent to use the shoddy political mechanism of capitalism, albeit for one purpose only, that of expressing the majority support for the ending of capitalism.
Posted by Imposs1904 at 9:10 AM No comments: