Capitalism and the Labour Party (2010)


“Britain’s big question of the next decade is whether we head towards an increasingly US-style capitalism – more unequal, more brutish, more unjust – or whether we can build a different model – a capitalism that works for people and not the other way round.”


Apparently, “in 2008, a consensus existed that we should understand the lessons of the financial crisis, not just about regulation, but about the kind of capitalism we needed to build”.

We’ve heard this before. The Labour Party has always tried to make capitalism work for the people but, every time that it has been in office, it has failed miserably. What is new is that previously Labour leaders never admitted that this was what they were trying to do. They said they were trying to gradually reform capitalism out of existence, not building a new kind of capitalism.

Still, an open recognition of what they are trying to do can only help clarify things. It is, however, indicative of how far Labour has changed that Ed Miliband was the candidate supported by the Left in the party. Even they have bought into the idea that there is no alternative to capitalism, only a choice about what sort of capitalism, and dropped the anti-capitalist rhetoric.

Ed’s brother David, the candidate supported by the Right declared that his Labour hero was Anthony Crosland (New Statesman, 30 August). He was the Fabian Society Labourite who argued that capitalism no longer existed. Which might explain why David Miliband, and Blair and Brown before him, refuse to use the c-word.

The reason Labour – and indeed the Tories who also talk of a “people’s capitalism” – fail to make capitalism work for the people is that this is an impossible mission. Capitalism just cannot be made to work in the interest of all. It is a profit-making system that can only work as such, in the interest of those who live off profits and to the detriment of those who live off wages and salaries or, in the absence of these, on state hand-outs.

The driving force of capitalism is the accumulation of capital out of profits. When this slows down, as at present, there is a crisis. So, governments must not do anything that might discourage the making of profits to accumulate as capital; in fact, even if it wasn’t their original intention (as perhaps, giving them the benefit of the doubt, it wasn’t with some Labour governments), they have to end up doing all they can to encourage this.

Inevitably, this brings them into conflict with the wage and salary working class whose labour is the source of profits, imposing wage restraint and/or austerity on them. This is not because the government’s members are nasty or incompetent or corrupt, but because this is how they are forced to act by virtue of being the government in the context of capitalism. They fail because they can’t act in any other way.

Instead of Labour gradually changing capitalism into something else, the experience of running capitalism changed the Labour Party – to the extent that today you are labelled a left-winger if you just mention the word “capitalism”, even to support it.
Posted by Imposs1904 at 11:56 PM 1 comment:

Socialist Meeting in Norwich on the Zeitgeist Movement 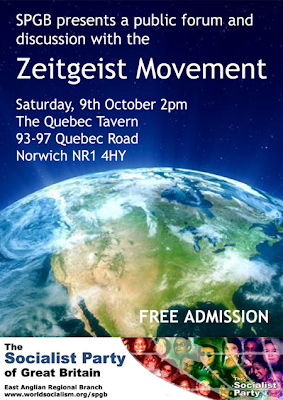