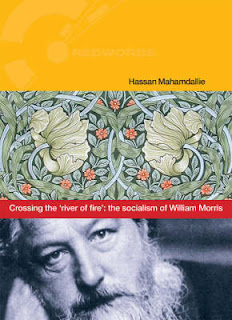 Book Review from the October 2008 issue of the Socialist Standard

Crossing the ‘river of fire’ : the socialism of William Morris. By Hassan Mahamdallie. (Redwords 2008.)

This is an SWP take on William Morris. Reasonably accurate, it emphasises (as might be expected from the SWP, at least in its current period) Morris’s anti-war and anti-imperialism stance. And Morris’s statement in the January 1887 issue of Commonweal does bear repeating:


“Meantime if war really becomes imminent our duties as socialists are clear enough, and do not differ from those we have to act on ordinarily. To further the spread of international feeling between workers by all means possible; to point out to our own workmen that foreign competition and rivalry, or commercial war, culminating at last in open war, are necessities of the plundering classes, and that the race and commercial quarrels of these classes only concern us so far as we can use them as opportunities for fostering discontent and revolution;. that the interests of the workmen are the same in all countries and they can never really be the enemies of each other; that the men of our labouring classes, therefore, should turn a deaf ear to the recruiting sergeant, and refuse to allow themselves be dressed up in red and be taught to form a part of the modern killing machine for the honour and glory of a country in which they have only a dog's share of many kicks and a few halfpence, - all this we have to preach always, though in the event of imminent war we may have to preach it more emphatically.”

For most of his active period as a socialist Morris was an “impossibilist” in that he favoured a policy of “making socialists” and “education for socialism” rather than seeking working class support on the basis of reform demands. Committed as they are to reformist agitation, the SWP find this an embarrassment just as much as E.P. Thompson did in both his CP and post-CP days. Mahamdallie argues that the correct tactic for Morris and the Socialist League would have been to do what the SWP does today: to get involved in the non-socialist, day-to-day struggles of workers with a view to directing them. He also claims that in 1890 Morris realised the “dreadful mistake” he had made in not doing this.

But did Morris admit this? His November 1890 resignation statement from the Socialist League (which had been taken over by bomb-throwing anarchists) “Where Are We Now? “does not say this. It says rather that he still thought he was right, but that as the working class seemed to have chosen a different path, so be it; that was their choice.

To be frank, Engels thought that Morris was wrong and preferred the reformist ILP to both the Socialist League and the SDF as a step towards the formation of genuine mass socialist party. But who was right? Morris or Engels? The ILP led to the Labour Party, which has been and gone, and we are still no nearer to socialism. The urgent need is still, as Morris insisted, campaigning for socialism not reforms.
Adam Buick
Posted by Imposs1904 at 9:47 AM No comments: