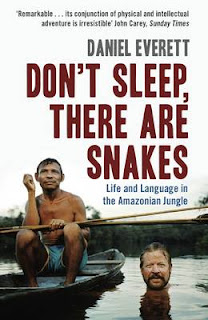 Book Review from the July 2009 issue of the Socialist Standard

Don’t Sleep, There are Snakes. By Daniel Everett. (Profile)

In 1977 Dan Everett travelled with his wife and their three young children to the midst of the Amazon jungle. They were going to live among the Pirahã people, where Everett was to learn their language in order to translate the new testament into it and so convert them to christianity (he was working for a missionary organisation). He learnt the language but failed to convert any of the Pirahã; rather, they and their culture had a profound influence on his own beliefs, about language, religion and how to live.

The Pirahã, who now number less than four hundred, are typical of pre-state societies. They depend on hunting, foraging and fishing, and a family can acquire enough food for a week by working at most twenty hours each (including the children), though fishing and so on are fun and don’t really count as work. They do not plan for the future, and do not preserve food. They have few possessions but no concept of poverty. There is a strong sense of community and of mutual responsibility: an elderly disabled man who could not fend for himself was given food as a matter of course. There are no chiefs, and ostracism and exclusion from food-sharing are the main means of ‘coercion’ used to control each other’s behaviour.
Spirit ‘voices’ can also influence the Pirahãs’ conduct, but they claim to see these spirits regularly and have no concept of a creator god. Their lives are very much in the here and now, and what they talk about is limited to what the speaker or someone they know has witnessed. Consequently, they were completely unreceptive to Everett’s religious message, based as it was on books produced by people he had never met. He translated Mark’s gospel into the Pirahã language, but they were only interested in hearing about the beheading of John the Baptist!

This led Everett to question his own faith in unseen things, and to a realisation that it was perfectly possible to be contented without believing in sin, hell and heaven. He kept his new-found atheism a secret for many years, and when he eventually came clean it resulted in the break-up of his family.

Everett describes the Pirahã as happy, patient and kind, certainly happier than any religious people he has encountered. It is important not to romanticise them and their way of life: they live in a dirty and dangerous environment, suffer high infant mortality and can be astonishingly violent to outsiders. But the Pirahãs “show no evidence of depression, chronic fatigue, extreme anxiety, panic attacks, or other psychological ailments common in many industrialized societies.”

This book shows clearly how life under capitalism is just one means of human organisation, not the consequence of ‘human nature’, and that life without money and mortgages and god has plenty of attractions.
Paul Bennett
Posted by Imposs1904 at 6:20 PM No comments: