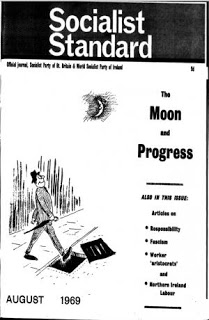 [1] Your views on parliamentarism are based on the idea that capitalism, at least in England, rules through parliament, and that capitalism can hardly do without it. I disagree, because through the last decades it has become clearer and clearer that parliament has hardly any function at all. The most important decisions are taken in ‘advisory boards’ etc, and not in parliament. Parliament only acclaims what all kinds of boards and committees of experts decide, and capitalism can do very well without this acclaim.

[3] I agree ‘‘capitalism can only be overthrown by the determined struggle of a socialist working class”. This struggle must consist of more than the giving of a vote to the Socialist Party of Great Britain. To overthrow capitalism it is needed that they force capitalism into a situation of economic crisis which it cannot overcome. This can be done by strikes in key industries, or a general strike, in which the workers are convinced of the need of reforms that go beyond the scope of capitalism.

[4] On the other hand I believe that it is not necessary that the workers are convinced of this before the final struggle begins. In other words it is possible, in my opinion even probable, that the workers will only understand that Socialism is in their interest through hard experience, for instance in previous struggles for ideals which do not go as far as the immediate establishment of Socialism, but for instance just a big improvement of their living conditions (higher wages, shorter work times, longer holidays, etc.). If they succeed in reaching some of these short-time goals it is important that they see that after some time all the reforms that they won by struggle are taken away from them again, like happened in France after the May uprising, so that hardly anything is left of the original reforms. After the workers have experienced this once, or a few times, it will be possible to convince them that the reforms they want cannot be realised within the capitalist system, and that they will have to go beyond this system and construct Socialism.

[5] This means that we must not put aside a struggle for anything short of Socialism, but think of it as a stage in the process of growing consciousness in the working class, and aim at a quickening of this process. We can even try to start an action for a short-time goal of which we know it cannot be realised because of the favourable side-effect; this growing consciousness. For these struggles I do not reject the possibility of co-operation with neo-capitalists and social democrats.

[6] Another thing I still do not understand is how you want to use parliament in a socialist state, as it is an instrument of the capitalist state which cannot be just taken over to be used for socialist goals. Marx and Engels pointed this out in their foreword to the Communist Manifesto of 1872.
Johan Sevenhuijsen
Delft, Holland.


Reply:
We have numbered for convenience the points our correspondent makes.

1—When we say a class rules We mean that it uses the state (the public power of coercion, with its armed forces, police, judges, and jailers) to further its interests. The Socialist Party of Great Britain does say that in many advanced countries—like Britain and Holland—the capitalist class controls the state, or rules, through parliament by persuading the working class to elect pro-capitalist candidates. It is parliament, composed of these people elected on a universal suffrage, that passes the laws (including those to raise the taxes to pay for the upkeep of the state machine) and to which is responsible the government which does indeed make the day-to-day decisions which parliament usually endorses, as Mr. Sevenhuijsen points out.

We don’t base our views on using parliament solely on the idea that the capitalists rule through parliament. Even in countries where the parliaments or national assemblies are obvious facades (the state capitalist countries, for example) and where real power does reside elsewhere (in the central committees of the ‘Communist’ parties) we still argue that workers must struggle for democratic rights and use their votes to elect socialist delegates to parliament or its equivalent. The Socialist Party maintains that it is vitally important that a socialist majority should demonstrate clearly that they are a majority—and not just take to the streets in a futile attempt to seize power. The advantage of this strategy is that any minority which tried to resist the socialist revolution would clearly expose itself as undemocratic and also as being responsible or any violence that might be needed to overcome such obstruction.

With a socialist majority in parliament the working class would control the state and could use its political power to carry through the conversion of the means of production into the common property of society. The working class will support the measures taken by a socialist majority in parliament not for any legalistic reasons but because, as conscious socialists, they will understand what steps are being taken and why because they will have sent the delegates to parliament to carry out their wishes. And the same argument applies to the armed forces and the police. They will be available to back up the decisions taken by the workers not because they have to obey the instructions of parliament but because a majority of them—as with the rest of the working class—will be socialists.

2—We have never claimed that parliament controls the economy. Indeed, that it does not and cannot is part of our case against parties that think they can plan capitalism to meet human needs. What we say is that parliament controls how political power is used—what taxes are levied, what laws are made, how the armed forces are used. Certainly the capitalists’ privileges are economic but these are protected by political means. If the capitalists had to rely on themselves and their moneybags to keep their privileges they would be in a very weak position. But their right to the surplus labour of the working class is endorsed, even granted, by the state. The means of production they own are not their personal possession; they cannot be locked away from the workers in a cupboard or a safe. Ownership of the means of production is a social institution enforced by political power. In the West (in state capitalist Russia the capitalists' privileges are more obviously dependent on their control of the state) ownership takes the form of pieces of paper, like stocks and shares, bills and bonds, and title deeds, which are enforceable by courts of law behind which in turn stands the armed might of the state. To end capitalist privilege, as Marx never ceased to emphasise, the workers must first win political power.

3 —Of course capitalism cannot be overthrown merely by voting. Behind the vote for Socialism must be socialist knowledge which will express itself as organisation on class lines ready to take over the running of the state and industry. The socialist election victory will be a gauge registering the fact that the overthrow of capitalism and its replacement by Socialism has majority endorsement. The vote, too, can be the means of choosing the mandated socialist delegates who will go to parliament and the local councils and take them over in the name of the working class. When a majority of workers have become socialist, using the vote will be the simplest, most direct way of gaining political power for Socialism.

4—Mr Sevenhuijsen, however, does not accept that there need be a socialist majority before the attempt to overthrow capitalism is made. He suggests that a minority of socialists can somehow precipitate mass socialist understanding. But we know of no reason why socialist understanding should necessarily emerge under conditions of economic crisis. It has not happened in the many crises capitalism has had to date. There will only be a revolutionary situation when workers are revolution-minded. Anyway, any such attempt by a minority is most likely to be crushed by the state acting to protect capitalist privilege. It is dangerous nonsense to talk as if a minority could take on and defeat the well-equipped modern state, especially if it enjoys mass support or even apathy. It is quite true that workers will come to want Socialism through their experience that capitalism cannot be reformed so as to work for them but also through their experience of hearing the socialist case. There is ample evidence by now that capitalism cannot serve human needs so there is no further need for workers to experience, as Mr Sevenhuijsen suggests, a few more times the failure and futility of reformism. What is missing in their experience is hearing the socialist case that a world of common ownership and production solely for use is the immediate, practicable alternative society that will end their problems. Socialists should be trying to convince workers now of this, not trying to give them further practical demonstrations of the futility of reformism by themselves engaging in it

5—That is why we disagree fundamentally here with Mr Sevenhuijsen. Socialists should advocate Socialism alone and refuse to propose reforms of capitalism. As all other parties stand for capitalism and represent various sections of the capitalist class (and this includes 'neo-capitalists and social democrats’), the Socialist Party should oppose them at all times, rejecting deals with them even for reforms.

6—We do not know what a 'socialist state' might be. When Socialism has been set up, with the abolition of classes and private property in the means of production there will be no need for a public power of coercion, or state. Instead there will be the simple democratic management of social affairs. We cannot tell now the details of such a set-up but no doubt it will involve elected councils and assemblies at some stage. In their 1872 Preface Marx and Engels repeat Marx’s comment after the Paris Commune of 1871 that “the working class cannot simply lay hold of the ready-made state machinery and wield it for its own purposes.” We agree. Before using the state machine to set up Socialism the workers will have to make certain changes in it. Marx mentioned breaking up the military-bureaucratic parts of it but certainly not abolishing parliament. Far from it, the Paris Commune extended the principle of accountability of public officials to the democratically elected assembly or commune. Talking of 1872 we recall another remark of Marx’s made that year, oddly enough at the Hague in Holland, that. political conditions in Britain, America, and perhaps Holland should allow the workers there to win power for Socialism by peaceful means, presumably by winning a socialist majority in an election. Since then those political conditions Marx had in mind—a majority of electors from the working class, parliamentary control of the government and armed forces, a civil service open to all—have been established in many other countries, thus allowing the working class to use them for the one revolutionary purpose of establishing Socialism.

Editorial Committee
Posted by Imposs1904 at 1:09 AM No comments: