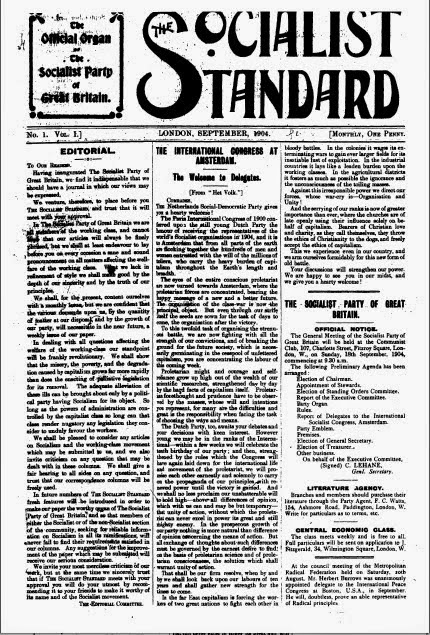 From the September 1904 issue of the Socialist Standard

That there is a good field for a sound Socialist party in this country is evident. The Socialist Party has been in existence barely three months, but the effect of the propaganda has already made itself felt.

Thirteen branches have been formed, and over twenty open-air meetings are held each Sunday, besides several others during the week.

Not alone have we secured a footing in the Metropolis, but enquiries have come in from various other parts of the country. Many of those who sought information have since joined the ranks.

The lack of an organ to give expression to our views has evidently hampered our work of teaching Socialism as the only way out of wage-slavery. But now that The Socialist Standard has been unfurled our task will be considerably facilitated.

The importance of the Party press as an instrument of propaganda cannot be over estimated, and comrades will see to it that The Socialist Standard is put into the hands of the working class.

At each propaganda meeting the Chairman should direct the attention of the audience to our organ—a paper written, published and paid for by the working class—and the comrade selling the paper should ask those who purchase copies to become subscribers. Then sample copies could be left at the houses in a given street in a suitable neighbourhood, and a call made say a week afterwards to ascertain results.

Comrades should not fear disappointment: Socialists are to be found in most unexpected quarters. By this method a good circulation can be kept up, and many new members secured to the Party.
Branches should see that a copy of our paper is supplied to each public library in their districts, and thus bring the organ and the Party under the notice of persons who may otherwise remain ignorant of the existence of either.

Arrangements are being made for the formation of Branches in Clerkenwell, Tottenham, and Ilford. Will members in these districts, and readers desirous of joining, communicate with me?

I shall also be glad to hear from readers in Coventry, Isle of Wight, Newcastle, Edinburgh, Oxford, Liverpool, Manchester, Rochester and Treharris regarding the establishment of branches in their respective localities. 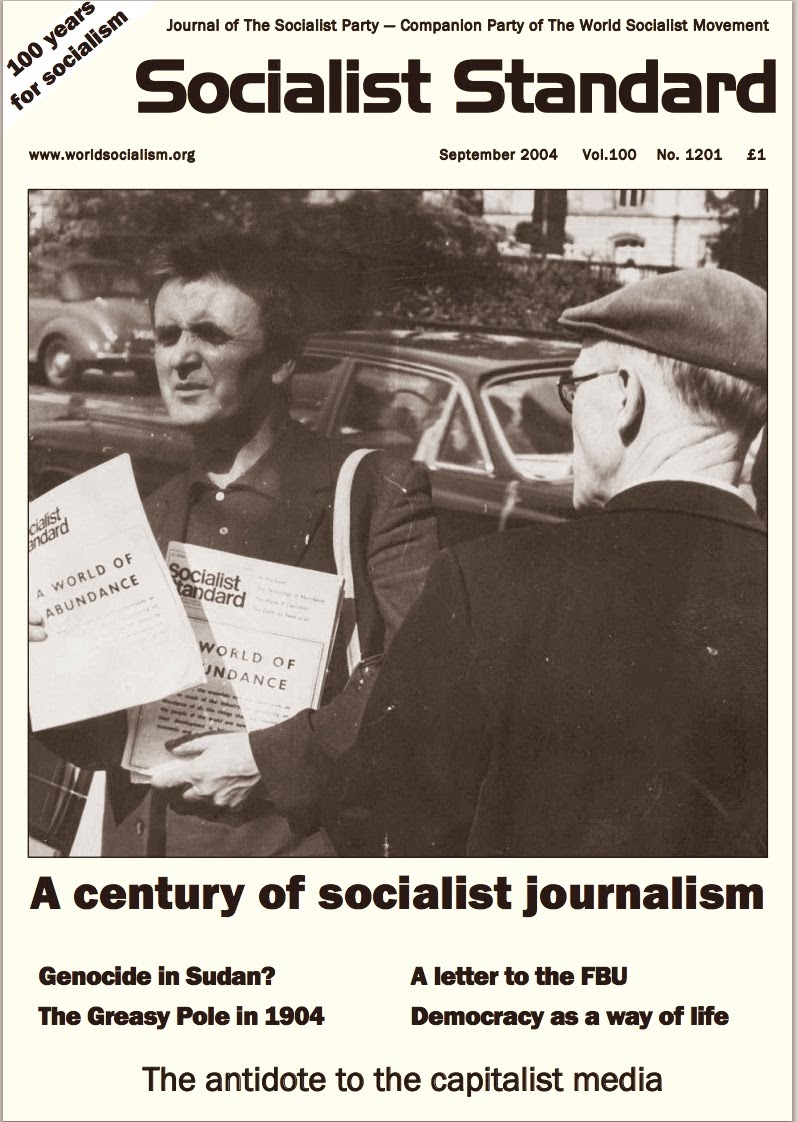 From the September 2004 issue of the Socialist Standard
Compared to most modern magazines and journals, the first Socialist Standard was huge, measuring a full 15-1/8” by 10” (38.4 cm by 25.5 cm). It was printed by Jacomb Brothers at their shop in Stratford, east London. A.E. Jacomb, the socialist half of the brothers, was one of the founder members, responsible for not only meeting the Party’s printing needs but also for much other behind-the-scenes organisation. The banner at the top of the Standard’s front page was configured in trendy art nouveau lettering. The price was just one penny for eight pages.
For the first few years perhaps the most noticeable things about the Standard were the full pages of ‘Party Notes’ and verbatim reports of Party meetings. The SS – as it used to called for short until this was abandoned, for obvious reasons – therefore could function as a kind of newsletter for members, helping create the esprit de corps which has been a feature of the Party ever since. Noticeable also, although never numerous, were the adverts. Perhaps the most interesting of these was for The Stores at 127 York Road, Battersea, purchases at which would render funds to the Party. In this the influence of the Party’s parent body, the Social Democratic Federation, with its boot works and bazaars, can be traced. The most familiar of the early features was ‘A Look Round’, a short items column partly based on newspaper snippets; a tradition which has been carried on over the decades in columns like ‘Notes By the Way’ and ‘The Passing Show’, and still evident in the current ‘Voice From the Back’.
In March 1908 a new pictorial banner was introduced. This was designed by F.C. Watts, a woodcarver by trade, and depicted a rising sun surmounted, slightly awkwardly, by the Party’s globe emblem. This little sketch summed up the exhilarating prospect of a “speedy termination” to capitalism which then seemed so likely. By this time many of the early features, such as the adverts, had vanished and ‘Party Notes’ was much reduced, to be banished to the back page to dwell with the branch directory, notices of meetings and the Declaration of Principles (which has appeared in every single issue of the Standard).

Subtle changes
The outbreak of the First World War did not immediately bring any major changes, although with many Party members ‘on the run’ before long, or just dropped out of activity, filling the Standard became a tough job. Towards the end of the war paper rationing brought a reduction of pages from eight to four, and the pages themselves reduced in size in September 1918. This new slimmed down Standard in cheap paper lacked the exuberant pre-war banner, bearing instead a plain title in gothic script (incidentally very similar to the contemporary appearance of Justice, the SDF paper). This was more fitting for the sober Party which emerged from the war. With the new look came also the snapping of ties to Jacomb Bros and a connection made instead with R.E. Taylor and Son of Banner Street. This was to be a long relationship which lasted from 1921 until 1966.
By the beginning of the 1930s the SPGB was growing rapidly, largely as a result of the Depression. Whether or not it was because the end again seemed nigh for capitalism, the pre-war socialist sunrise returned in September 1932. Accompanying this was a new innovation – a list of contents – a useful feature which has been present for the vast majority of the period since. The Edwardian-era symbolism must have seemed quaint and anachronistic even then, for within a year a new banner with plain serif letters was introduced and which possessed a spikiness which seemed suited for a party with all barbs out in defence of Marxism against the pseudo-socialist pretences of Labour and the CPGB.
Further changes came in 1939 with a completely new look, influenced by modernist advertising and design techniques. With its bold typefaces, bright-looking yellow covers, and well-spaced layout, this was in many ways an apogee for the Standard. It was, however, fairly short-lived. The outbreak of the Second World War instantly stripped off the Standard’s yellow shirt and paper shortages soon put paid to the rest of the fandoodle. Indeed, by mid-1942 the Standard was an eight-page propaganda sheet, tightly written in a tiny typeface.

Although ‘peace’ brought an increase in page numbers, the Standard stayed utilitarian in visage throughout the late 1940s. War-time problems, such as the destruction by bombing of the type and articles of the January 1941 issue, and power stoppages during the fuel crisis of early 1947, meant bringing out the Standard was at times a struggle, but it still came out regularly throughout the decade.


From organ to journal
Despite a few innovations, such as the introduction of cartoons, drawn by Robert Coster (Barltrop) in 1953, the Socialist Standard in the 1950s was a rather conservative looking periodical and by the end of the decade it was obvious that the design needed some attention and fresh input. This was an especially vital and pressing problem given the increasing difficulty of holding outdoor meetings, which up until this time had been the Party’s most important propaganda method. Therefore in 1959 the Standard was revamped, the first edition in May being ready for a big push during the Hackney and Bethnal Green election campaigns. As well as a spacious layout and a new banner, the introduction of photographs greatly modernised its appearance (and it became a “journal” rather than the faintly obscene “organ” it had previously been). The changes inaugurated a great period of almost constant experimentation in the design of the Standard which lasted throughout the 1960s. The new wave culminated in 1967-68 with a series of excellent covers professionally designed by Lionel Selwyn, who was responsible for the layout during this decade.
The early- to mid-1970s in contrast saw the Standard slip back to a more conservative look, even with a return to 1950s-type cartoons and non-pictorial covers for a time. But towards the end of the 1970s the it once again improved in appearance, culminating in yet another makeover in June 1979, just in time for the 75th anniversary of the Party. With internal pictures, a professional layout and an adjustment to true A4 size, this defined what became the ‘80s layout, with – by the mid-80s – a highly professional design, with innovative typefaces and striking front covers together with increased use of specialist columns, most notably the TV Review.
From the beginning of the 90s, typesetting – or rather typing to diskette – was taken over by Party members, thereby reducing production costs. In fact, for a period the Standard was also printed at the Party’s Head office from plates prepared by an outside firm. Further format alterations came in 1994 when the design and printing was taken over by Nigel McCullough from Belfast, who introduced a very slick and distinctive look for the Standard. The layout and design is still done by Party members. The turn of the century saw the appearance of an on-line version, at www.worldsocialism.org/spgb, where an increasing number read it, and the introduction of Peter Rigg’s ever apposite cartoon “Free Lunch”.
Today, the Socialist Standard has the distinction of being the longest running party political journal in the country. Despite world wars, depression, recession and slump, it has appeared every month without fail for 100 years. For an ordinary publication this would be a matter for self-congratulation. For ourselves, however, such longevity is to be regretted as we would rather have seen socialism established long since. However, we shall continue until the job is done – and a visually appealing and combative Socialist Standard can only aid us in that process.
Keith Scholey
Posted by Imposs1904 at 10:30 AM No comments: