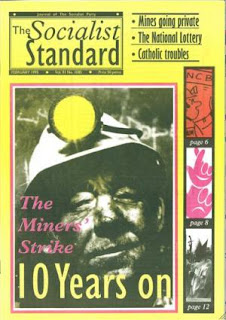 From the February 1995 issue of the Socialist Standard

Scattered throughout the land, with the inconspicuous ubiquity of the beggars who are now everywhere, is a new form of life-support machine. They are to be found on every major street, sometimes several of them in a row. Staggering towards them, gasping for the machines, are endless streams of wretches who queue before the machine, like Muslims before Mecca. Cards in hands they stand - we stand, for you and I are there frequently - and appeal to the money machine, like robots in search of oil to keep them toiling.

In the face of the cash machine all claims to individuality collapse. “I AM A NUMBER” you remind yourself, as you tap in the four digits given to you by the bank to register your new identity. It is no use tapping in a stanza from Shelley, a line or two from Morrissey, an extract from your diary . . . The machine does not want to know who you are or how you feel, but simply how much money you want and how much money you arc allowed to have. It issues cold instructions: PRESS AMOUNT REQUIRED - WAIT - TAKE THE CARD - TAKE THE MONEY PROMPTLY . . . Missing you already!

That is the pleasant scenario. The cash machines have no obligation to deliver the dosh. Let us say
that a mother with two kids approaches The Machine, inserts her card and requests £30 so that she can buy enough to feed her children for the week. She has exceeded her overdraft. The Machine misses nothing. Request denied. There is no right to appeal on grounds of need: WITHDRAW YOUR CARD AND GO AWAY. Next in the queue stands a businessman who has made his fortune out of renting out slum properties to the poor. He is about to clinch a deal and proposes to withdraw £100 to pay for a decent business lunch. (Wine doesn’t come cheap in the decent restaurants, you know.) He inserts his card and The Machine, still angry at the audacity of the greedy mother and her excessive demands, pours out the twenty-quid notes, reassured that the world makes sense once more.

If you have no money you go without. In some countries you watch your babies slowly starve to death. In this country you face the indignities, discomforts and insecurities of scraping by with needs greater than you have money. There is no greater symbol of alienation than money. It tramples on our freedoms and desires, crushing hope in the impoverished and lavishing endless powers upon the extremely rich. The cash machine is symptom, not cause of this state of affairs. It is an inanimate player in a cruel game. The man who was seen some weeks ago in Camden Town kicking the wall containing the cash machine of the Royal Bank of Scotland made no impact upon the system which made him poor. (Even as a gesture of mere anti-Scots nationalism it would have been impotent.) Had he smashed open the machine and strangled it with its own thinly-wired innards The Tyranny of Money would have been dented no more than by the knocking-off of a policeman’s hat during an anti-war demonstration. The machine has built-in resilience.

Some months ago in a Budgen supermarket a woman presented her goods at the till, was given her bill and then presented her Visa card to the cashier. The card was inserted into the machine and, within seconds, popped out with the word VOID appearing in the appropriate slot. Her card was not accepted the cashier asked for cash. The woman had none. She looked around her, perhaps hoping that one of us in the neighbouring queue would pull out their wallet and act the Samaritan rather than shuffle the coins in our pockets and feel sorry for her. She burst into tears and left without the shopping. An unpurchased cabbage stood as a monument to her poverty. Did she go home and curse Budgen or the Tories or the blacks or the Jews . . . or maybe join the suicide statistics . . .  or maybe, like me and like you, accommodate herself to the sickly rituals of spending within her means? We can be sure that the credit-card machine lost no sleep over the drama. It is just a machine, and the cashiers, the managers, the accountants and producers of goods merely appendages to the machine.

In the Little Chef restaurant on the M1 the waiters plug themselves into the cash till before taking our money. It is apparently a security measure to ensure that the appendage pays sufficient homage to the machine. It is hard to think of a more symbolic image of the alienating bondage of money fetishism than a grown man plugging himself into a money machine.
Steve Coleman
Posted by Imposs1904 at 1:17 PM No comments: 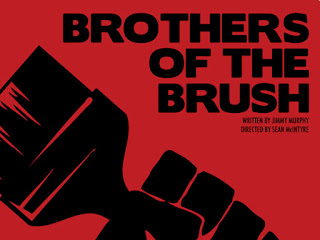 Theatre Review from the June 1996 issue of the Socialist Standard

Brothers of the Brush by Jimmy Murphy (Arts Theatre)

Capitalism brutalises human relationships. Politicians are right when they talk about the importance of 'competing with economic opponents’ and 'the struggle to survive’. The dynamics of capitalism sets class against class, pits country against country and individuals against one another.

The fortune tellers of capitalist economics argue that those who survive the vicious culling of the work force as companies struggle to reduce costs, feel powerful and empowered. Analysts report, however, that the facts are rather different: that the survivors are frequently inhibited by uncertainty and riddled with guilt.

In Brothers of the Brush, a new play by Jimmy Murphy, at the Arts Theatre, the corrosive impact of the black economy on working relationships is examined with an authentic blend of humour and merciless honesty. Four flawed but decent men fell victim of exploitation and the power games of management and unions, with predictable and tragic results.

Here is a play of rare passion and skill, with dialogue as sharp and convincing as anything currently available in London. Murphy chillingly demonstrates that morality is determined by the inexorable laws of economics, and that in the dog eat dog world of capitalist economics the niceties of social behaviour are frequently a victim of the need to survive.

Writing about his play Murphy observes that "In the black economy unions are as redundant as the workforce they once represented, old alliances are spurned, ideologies discarded, a new creed is the order of the day, look after number one".

But looking after number one - whether it be class, group or individual - is at the very heart of capitalism. Murphy’s unsentimental, vivid and serious drama is in feet an unflinching attack on the barbarisms of employment

After the burdens of watching two pieces of pretentious, bourgeois drama on recent visits to the theatre, Murphy’s play is like a douche of cold, refreshing water. This is a play about real people feeing real dilemmas. It is beautifully constructed, poignant piece of theatre. If you can’t catch it in London do look out for it when it is produced locally. Thoroughly recommended.
Michael Gill
Posted by Imposs1904 at 3:53 AM No comments: