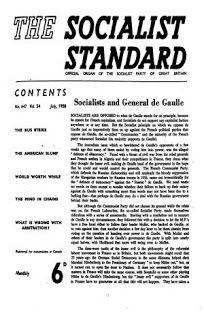 From the July 1958 issue of the Socialist Standard

“Take a basket, please,” said a smartly overalled young lady assistant as Writer walked into a supermarket for the first (and last) time in his life. How well lit the place was and what a marvellous display of colour! Could the magician’s cave of jewels seem more desirable to Aladdin than this wonderland of good things did to the Writer? Innumerable packets of powdered soup (just add boiling water); tins of ham (no bones with it, just slice it with the knife); meat gravy (just ready to be poured out of the bottle). Even the tinned carrots looked nearly as luscious as ripe peaches, or so the picture indicated. Rich, creamy custard powder and scrumptious cake-mixes (just add tap-water). Savoury cheese wrapped in cellophane already sliced (just remove the wrapper). Food in glass pots simply pleading to be eaten without even water being required, food in transparent bags and in beautiful packets. Could heaven itself be more beckoning? One of these and one of those—into the basket with them. And certainly some of these other ones and some of those, too. Quick, those over there are good, and these simply can’t be left behind. What bliss! And then, finally* the cashier. How much? £3 10s.? Phew! The Writer staggered out with his purchases, although he went in only intending to look around.

Food for thought
But the supermarket also provides food for thought and the question arises as to why the housewife prefers to shop mere rather than in the local stores nearer her own home. In shopping at the local store, when her turn to be served comes and she is confronted by a shop-assistant, she has to have her order ready. This means spending time considering what is needed, and if she is likely to be flustered or to forget some of the items when it is her turn to be served, she will have to write out a list. With more married women going out to work, with the increasing complexity of life, and the rising tempo of commercialised distractions as the present system of society develops, it is no wonder that the shopper prefers a supermarket—just walking around choosing at will. According to expert reports this impulse buying has grown every year for the past two decades and has coincided with the growth of self-service shopping. But perhaps the term “choosing at will” is not quite correct, in view of the deep trickery which is commonly practised. On May 18th, 1956, The New York Times printed a remarkable interview with Gerald Stahl, executive vice- president of the Package Design Council. He stated: "Psychiatrists say that people have so much to choose from that they want help—they will like the package that hypnotizes them into picking it” He urged food packers to put more hypnosis into their package designing, so that the housewife will stick out her hand for it rather than one of many rivals.

Mr. Stahl has found that it takes the average woman exactly twenty seconds to cover an aisle in a supermarket if she doesn't tarry; so a good package design should hypnotize the woman like a flashlight waved in front of her eyes. Some colours, such as red and yellow, are helpful in creating hypnotic effects. To get the woman to reach and get the package in her hands, designers, he explained, are now using “symbols that have a dreamlike quality.” To cite examples of dreamlike quality, he mentioned the mouth-watering frosted cakes that decorate the packages of cake mixes, sizzling steaks, mushrooms frying in butter. The idea is to sell the sizzle rather than the meat. Such illustrations make the woman’s imagination leap ahead to the end product.

The Colour Research Institute, which specialises in designing deep-impact packages, won’t even send a package out into the field for testing until it has been given ocular or eye-movement tests to show how the consumer’s eye will travel over the package on the shelf. This is a gauge of the attention-holding power of the design.

According to Vance Packard in The Hidden Persuaders, the Coca-Cola Company made an interesting psychological discovery that customers who paused to refresh themselves at a soft drink counter ended by spending substantially more. In a test where they offered customers free drinks, about 80 per cent, accepted the Cokes, and spent about a £1 more than the average customer. After coming out from work, the prospective shopper needs to relax and in this mood is fair game to any firm with all the know-how of tricks suggested by the psychologist. One can well understand that the working-class housewife with a background of forced economy and trying to make both ends meet can be “caught” by a little extravagance. An American supermarket found that putting a pat of butter on top of each of its better steaks caused sales to soar 15 per cent.

In a trance until pay time
A psychological researcher in America, James Vicary, became curious to know why there had been such a rise in supermarket sales. His suspicion was that perhaps the housewives underwent an increase in tension when confronted with so many possibilities that they were forced into making quick purchases. He set out to find if this was true. He hid a motion-picture camera to record the eye-blink rate of women as they shopped. How fast a person blinks their eyes is supposed to be a good index of the state of his inner tension. The average person, according to Mr. Vicary, normally blinks his eyes about thirty-two times a minute. If he is tense he blinks them more frequently, under extreme tension up to fifty or sixty times a minute. If he is notably relaxed on the other hand his eye-blink rate may drop to a subnormal twenty or less.

Mr. Vicary set up his cameras and started following the ladies as they entered the store. The results were startling, even to him. Their eye-blink rate, instead of going up to indicate mounting tension, went down and down, to a very subnormal fourteen blinks a minute. The ladies fell into what Mr. Vicary calls a hypnoidal trance, a light kind of trance that, he explains, is the first stage of hypnosis. Mr. Vicary has decided that the main cause of the trance is that the supermarket is packed with products that in former years would have been items that only kings and queens could afford, and here in this fairyland they were available.

These havens of plate-glass and chrome, hygiene and bright lights, the brilliant presentation of merchandise involving the most up-to-date tricks of salesmanship, these things, which together add up to the supermarket—the refuge of the working-class housewife. The very epitome of capitalist society itself seems expressed in the jungle of the supermarket.
Frank Offord
Posted by Imposs1904 at 11:53 PM 1 comment: 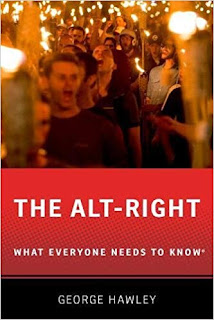 Book Review from the May 2019 issue of the Socialist Standard

‘The Alt-Right: What Everyone Needs to Know’. By George Hawley (Oxford University Press £10.99)

The label Alternative Right (now usually shortened to Alt-Right) was coined in 2008. It refers to a ‘far-right radical movement’ in the US, which has had some impact but is possibly now in decline, plagued by infighting. Here George Hawley discusses its origins, history and influences, and its connections to other political viewpoints.

As a movement rather than an actual party or organisation, the Alt-Right consists of a range of views, but the obnoxious core beliefs of its supporters can be described fairly simply. The oft-cited Fourteen Words are: ‘We must secure the existence of our people and a future for white children’, while the website of the National Policy Institute, an Alt-Right think tank, describes it as ‘dedicated to the heritage, identity, and future of people of European descent in the United States and around the world’. The Alt-Right is explicitly racist, seeing race as a biological category, and advocating white identity politics and a white ethnostate; it wishes to end all non-white immigration to the US. It is anti-Semitic, anti-feminist, and often misogynistic.  Some of its supporters are neo-Nazis, but by no means all. It is not populist, as it holds in contempt many who are not part of the elite, calling them ‘norms’ and viewing them as not ‘racially aware’.

The US political system, together with the vast sums spent by the two main parties, means that the Alt-Right has had little electoral success. It is mainly an online movement, setting up its own websites, making great use of social media, trolling people with other ideas and seeking to influence others. It has been open to doxing, where the real-world identities of anonymous Alt-Right bloggers and contributors are revealed by opponents, which often causes problems for them. Its informal nature means it is impossible to say how many supporters or sympathisers it has, though its core advocates are fortunately fairly few in number.

The main example of Alt-Right activism that was not online was the ‘Unite the Right’ rally in Charlottesville, Virginia in August 2017. This became very violent, with many protesting in opposition, and one counter-protester was killed when a car was driven into a group of them. The rally clearly harmed the Alt-Right’s reputation, though Donald Trump claimed that both sides shared responsibility for what happened.

Hawley gives a fairly thorough account of the various influences on the Alt-Right, their links to European organisations and their differences from mainstream conservatives. However, what the book lacks is much description and analysis of their ideas and aims. Presumably this is because, as he says, they do not ‘offer a coherent or well-developed set of policy proposals’. But some more discussion of the views of its main figures, beyond the brief descriptions given, would have been helpful.
Paul Bennett
Posted by Imposs1904 at 9:01 PM No comments: