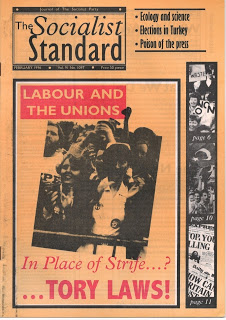 From the February 1996 issue of the Socialist Standard

A member of the Socialist Party asked me recently why my visits were usually to the subsidised theatre and, specifically, to the National and the Barbican complexes? Why, my questioner wanted to know, didn't I go more frequently to the commercial theatre and. since I live not far away from London, to the West End?

Now I have to admit that as a fan my tastes are wide and eclectic. I enjoy the frisson which comes with public performance: that strange interplay between actor and audience which means that every night is a once-for-all occasion. I respond to the immediacy of actors, the sense that one is able, almost voyeuristically, to spectate as private passions fill a public arena. And I would as happily spend an evening watching the great Ken Dodd— who works an audience until it is literally helpless with laughter— as I would attend one of Shakespeare's great plays (especially, perhaps, the last three with their inspiring messages about forgiveness). But go regularly to the commercial theatre? I fear not.

It isn’t that the seats arc dearer—although they are. £25 for good seats in the West End, as against £12-18 for something comparable in the subsidised houses. It isn’t that standards of performance and production are wildly different—although the subsidised theatre with more time to rehearse etc., generally wins hands down. The trouble is that much commercial theatre is either escapist (in the worse sense), trivial or patronising. Sometimes it is all three.

In the past twelve months I’ve seen only four shows in the West End: Beautiful Things (widely praised but, as it turned out. a nauseating "EastEnders" lookalike); Taking Sides (because of a personal interest in music and the life of the conductor William Furtwangler); Hamlet: and Indian Ink (Tom Stoppard's latest which seemed to me much better as a radio play). I hope to have time to see Three Tall Women (still at Wyndhams) and Burning Blue (Ambassadors), but the rest hold little appeal.

Look at what is currently available. Musicals by the bucketful: seventeen currently advertised. of which several have run for more than five years. Many are “technology musicals", in which character and story play second fiddle to large production effects: the helicopter arrival in Miss Saigon; the barricade scene in Les Miserables; the central ten minutes in Phantom of the Opera.

Musicals like this vividly reflect the way in which in capitalist society people are often less important than machines. They also reek with sentiment; inducing feelings spuriously and synthetically, and trivialising human emotions. I remember seeing Les Miserables over then years ago— long before its transfer the to the West End. Having read Victor Hugo’s book and knowing a little about the history of the time I was appalled. And the pseudo-operatic score—all pretence and little substance— added to my sense of woe. Yet all around me were going wild, claiming a definitive masterpiece. It was unnerving. Later I reflected that Chou Chin Chow was greeted in similar fashion nearly a century ago.

What of musicals which engage the heart and mind, that—to use a cliché—illuminate the human condition? I remember a story about the agricultural working class, The Hired Man (book by Melvyn Bragg, music by Howard Goodall) several years ago, and one about the Spanish Civil War which I caught on tour. For the rest it’s compilation musicals (Buddy, Jolson, Roy Orbison, etc.), turgid synthetic confections (like Oliver), and shows by the ubiquitous Andrew Lloyd Webber. If Phantom doesn't please try Starlight Express, Cats or Sunset Boulevard or, my particular nominee. Aspects of Love. This last-named ought properly to be called Aspects of Self-Gratification. In it Webber demonstrates without a touch of satire, irony or self- awareness, the way in which contemporary society has transformed a powerful, generous, often selfless emotion, into a chilling counterfeit of "I’m all right” self-interest.

In contrast much that is available in the subsidised theatre questions and challenges. There are currently twelve shows in repertory at the National and the Barbican. At least four of these shows—A Patriot for Me, Skylight, Volpone and The Machine Wreckers—are enthralling, entertaining and edifying. All are worth visiting. I have mentioned several in recent months. In them experience and comment provide the dry tinder for revolutionary feelings and insights. They have few parallels in the West End.