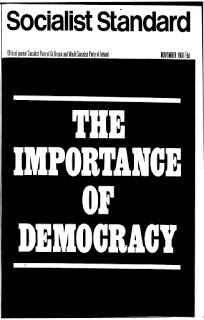 From the November 1968 issue of the Socialist Standard

Many political groups fancy themselves as “vanguards” of the working-class. We do not. We say that workers should spurn these would-be elites and organise for Socialism democratically, without leaders.

By fostering wrong theories about what Socialism is and how it can be achieved the “vanguard” organisations are delaying the socialist revolution. It may help to clear away confusion if we list a number of doctrines held by most of these groups, and then state why we disagree with them :

1. State ownership is Socialism, or a step on the way to Socialism.

3. Socialism will arrive by violent insurrection.

4. Socialism will come out of a gigantic slump.

5. Workers cannot understand Socialism, so they must be given bait in the form of “transitional demands.”

7. There is a middle class in modern society.

It is easy to see that these beliefs interlock and support each other. If, for example, workers are so feeble-minded that they cannot understand Socialism then they need to be led. Socialism will therefore come about without mass understanding, by a disciplined minority seizing power. Minorities are best able to seize power during crises, a fact which renders attractive the notion that capitalism will “collapse”— terminate for purely mechanistic reasons without the necessity for widespread socialist education. Since workers must have some incentive to follow the vanguard, “transitional demands” in the form of reformist promises are necessary, and since these tactics were successful in carrying to power the Russian Bolsheviks, it is assumed that Russia must be on the road to Socialism. The basic dogma on which all this is founded is that the mass of the workers cannot understand Socialism (or at least, not without the constant tutelage of the vanguard) which implies that the vanguard must be recruited from outside the working-class. Therefore, the vanguard groups reject the Marxist contention that there are only two classes in advanced capitalism.

Vanguardists may protest at this summary; they may insist that they are very much concerned with working-class consciousness, and do not assert that workers cannot understand Socialism. But an examination of their propaganda shows that “consciousness” means merely following the right leaders. When it is suggested that the majority of the population must attain a clear desire for the abolition of the wages system, and the introduction of a worldwide moneyless community, the vanguardists reply that this is “too abstract”, or (if they are students) “too academic.”

Indeed, they themselves do not strive for such a socialist system. None of the vanguard groups advocates a world without wages, with production democratically planned to meet people’s needs. Some of them say, when pushed, that they look forward to such a world “ultimately,” but since this “ultimate” aim has no effect on their actions it can only be interpreted as an empty platitude.

Far from specifying Socialism as their aim, they are reticent and muddled about even the capitalist reforms they will introduce if they get power. These also are apparently too “academic” to stipulate. Ironically, Bernstein’s dictum “The movement is everything, the goal nothing” sums up the vanguard outlook very well, as a glance at the Newsletter or Socialist Worker will confirm. It seems fair to conclude, however, that the vanguardists’ ideal is the brutal capitalist regime of Lenin, a fact which causes us socialists some concern, as it means we would be liquidated (a fate which would undoubtedly have befallen us under the Bolshevik tyranny).

The belief that Socialism or something akin to it exists in Russia is common to most vanguard groups. This is to expected: the vanguard strategy has been put into practice many times, and should surely have succeeded once or twice. Russia furnishes fresh proof every day that it is typically capitalist, but all its obviously anti-working-class features are dismissed as the results of “degeneration”. Some look to China or Cuba as less degenerate systems, which sets a useful precedent. By the time the faithful have to write off these nations, other state capitalist paragons will have arisen in Africa or Latin America to replace them.

Thus some vanguardists centre their hopes on capitalist revolutions in backward regions. Inside advanced capitalism reformist politics are seen to be sterile and stereotyped. It is consequently no marvel that a generation reared on TV westerns will lift up its eyes to the Third World, where all the romance of Garibaldi is reborn amidst the waste land of the twentieth century, where the beautiful hero, ten times larger than life, still strides about trusting his life to luck “like a tossed coin”. The Third World Utopians fail to notice that the spectacular energy of change in the underdeveloped zones is precisely a. measure of their spectacular backwardness, and of the telescoped development necessary for them to catch up with Europe, North America and Japan. This acceleration of social growth does result in new, bizarre combinations, both in economic organisation and in consciousness—but these cannot produce a leap forward into Socialism ahead of the more advanced countries. A comparison of Mao with Winstanley, or of Pan-Africanism with the Jacobins, would show how even the advances in consciousness in successive capitalist revolutions are severely truncated by economic backwardness.

There are other vanguardists who have come round to the socialist view that Russia is capitalist, but they still cling to the idea that the Bolshevik revolution was socialist—and by implication, that a future socialist revolution will be run on similar lines. After all, an admission that the Russian working-class never held political power, and that Bolshevism was always a capitalist movement, would call into question the entire mythology of the Left. An increasing number of vanguardists are seriously worried by the question: when did “degeneration” start? More clues to the answer will be found with Robespierre, Bakunin and Tkachev than with Stalin.

In one sense it is true that Russia is progressing towards Socialism—in the same way that all capitalist countries are. But the working-class of the Russian Empire will have to overthrow their state capitalist bosses, and they can only do this after they have won the elementary democratic rights which we have. State ownership is not Socialism, but a major feature of all forms of capitalism. However wage-slavery is administered, it cannot be made to run in the interests of the wage-slaves.

The belief that Russia is socialist or a “workers’ state” has been a source of confusion for half a century. Happily, it is now ebbing away—illusions are usually corrected by material conditions sooner or later. But the fact that such a doctrine could catch on so readily shows the hazy conception of Socialism which has always been popular. Disputes about how to get Socialism usually turn out to be disputes about what it is. For instance, it is apparent that if Socialism is to be a democratic society a majority of the population must opt for it before it can come into existence. Any minority which intends to impose what it calls “socialism” on the rest of the population against their wishes or, for that matter, without their express consent, obviously intends to rule undemocratically. A minority which uses violence to get power must use violence to retain power. The means cannot be divorced from the ends.

Vanguardism often emerges in the minds of people who know that there is a lot wrong with society and aim at something radically different. But they avoid facing up to the fact that the great majority of workers do not want a fundamental change: they grumble, and desire palliatives, but oppose the abolition of those institutions which are so dear to their hearts: the police, the armed forces, money, frontiers—even the Queen. It is the refusal to face squarely that the bulk of the working-class wants capitalism which leads to notions of elitism and insurrectionary violence, to the idea that workers must be manipulated by slogan-shouting demagogues brandishing reformist bait. Discussion, the most potent means of changing attitudes, is treated with contempt. “Action” for its own sake is lauded to the skies. We socialists have never tried to forget the obvious fact that the working-class is hostile to Socialism, but we are encouraged by the knowledge that we, as members of the working-class, have reacted to capitalism by opposing it. There is nothing remarkable about us as individuals, so it cannot be a hopeless task to set about changing the ideas of our fellows—especially as they learn from their own experience of capitalism. How much closer we would be to Socialism today if all those who spend their time advocating “transitional demands” were on our side!

Marx’s (and the Socialist Party of Great Britain’s) conception of the working-class as all those who have to sell their labour-power, from road-sweepers to computer programmers, would be inconvenient to members of vanguard groups, who usually believe that they themselves are not members of the working-class, whilst admitting that it is the working-class which must achieve Socialism. The vanguard people need to chase feverishly down every reformist cul-de-sac, a practice known as “developing consciousness through Struggle.” “Struggle” is apparently a sort of metaphysical driving force which is supposed to turn reforms into sparks of revolution. Such mystification is essential to the curious doctrine that the workers will establish Socialism inadvertently, while they are occupied with something else.

“The workers” cannot grasp anything so “abstract” as Socialism, it is claimed. But the exponents of vanguardism do understand it, or so they say. Evidently then, they are not workers: they are the “intelligentsia” or “middle class”. They constitute the officer corps. The workers are the instrument, but they wield the instrument. Socialism is a paper hoop through which the working-class, performing circus animals, must be coaxed to jump. They are the ringmasters. Or, as Trotsky saw it, the masses are the steam, and the leadership is the piston which gives the steam direction.