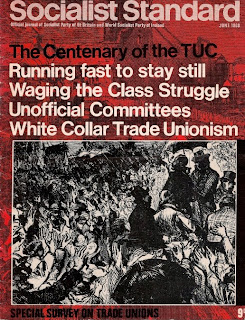 From the June 1968 issue of the Socialist Standard


Thousands of workers know from personal experience that members of the Socialist Party of Great Britain are involved in supporting and encouraging industrial organisation and action to improve wages and working conditions. Socialists are active at all levels of the trade union movement - branch officers, shop stewards, works convenors, organisers, committee men, conference delegates, regular branch attenders - and in many unions and industries. Socialists are active unionists because they are class conscious workers; they know that there is an irreconcilable conflict of interest between workers and capitalists and  that all governments have to act as agents of the capitalists.

Briefly, the policy Socialists advocate is democratic action to improve or maintain wages and working conditions and they emphasise that this policy should be pursued whatever party forms the government. We do not soft-peddle the class struggle because there is a Labour government or because capitalism has started a war. Socialists are opposed to unions being linked to the Labour Party and refuse to pay the political levy. Beyond this, we say it is up to the workers involved to work out the details of their demands and how to get them. As it is the workers in an industry or factory or office who have to take part in the struggle, and suffer the consequences of any defeat, it is clear that they alone should decide what to do and how to do it. We do not tell workers what to do, except of course for general advice on the importance of democracy and the class struggle. We do not fancy ourselves as leaders.

The Socialist Party, as a party, does not intervene in the affairs of trade unions. It is merely that we, as class conscious workers share a broad conception of what sound industrial action is. As far as details are concerned we can, and do, find ourselves reaching different conclusions; some favour the closed shop, others say it's undemocratic. We have members in rival unions. Some support ginger groups; some have joined breakaway unions while others have stayed in, and so on.

Socialist Party members have always been active unionists. In the early days many were members of craft unions, particularly in the building industry. One of these was perhaps our most "illustrious" ex-member George Hicks, CBE, one-time TUC President, Labour MP and Junior Minister who died in 1954. One member who knew him says:

George Hicks, after leaving the SPGB became an official of a building workers union and was President of the TUV in 1927. He also joined the Labour Party and remained in it for the rest of his life. In spite of this he continued to take an interest in the SPGB and on occasions declared that he still agreed with the SPGB case. Early in the 1920's he debated with Palme Dutt and not only put the SPGB case against the Communist Party but frankly stated that it was the SPGB case he was putting.

Today the composition is rather different though. M. Harrison in his Trade Unions and the Labour Party since 1945 remarks that in the Amalgamated Society of Woodworkers  several branches "are influenced by minority Socialist groups like the Independent Labour Party and the Socialist Party of Great Britain". Not that the ILP is socialist, mind you, or that we are out to influence the ASW. It is true, however, that there are socialists active in this union. Between the wars, with the bulk of the members in London, socialists were active in unions like the Union of Postal Workers and the busmen's section of the TGWU. During the war members formed branches of the National Union of Agricultural Workers. At first this might seem odd but the explanation lies in the fact that many Socialists were working on the land after refusing to do military service. There are Socialists active in the printing unions, in the seamen's union, AEU and ETU, and in white collar unions covering civil servants, teachers and technical workers. As Socialists are recruited from all sections of the working class, so there are Socialists active throughout the trade union movement.

To illustrate how Socialist Party members are active in trade unions it will be useful to take the cases of two who have been particularly so - one in the TGWU and the other in DATA.

The TGWU, with over a million members, is the largest genuine trade union in the world. Perhaps this is its drawback as it seems to make for bureaucratic rule. And the TGWU must hold the record for giving birth to breakaway unions. Socialists, as we said, were active on the buses just before and during the last war. The busmen, then, were a highly regarded section of the working class. It was a secure job that carried with it some prestige and this encouraged militancy. The union was at that time dominated by Ernest Bevin with Arthur Deakin as his deputy. After the failure of the negotiations for a shorter working day for London busmen an official strike began on May Day 1937. The Central Bus Committee was given full powers to conduct the strike. This six-man committee included one Socialist and four members of the so-called Communist Party. The CP also ran the London Busmen's Rank and File Movement. Although the TGWU executive had given the busmen full powers to conduct the strike, on 28 May Bevin issued over the radio an order to return to work. To preserve their industrial strength the busmen returned to work in an orderly fashion. The executive, however, then moved against the militants. As one of our members involved described it:

The Union instituted an enquiry into the strike. The Central Bus Committeemen and many local branch members were summoned to Transport House to answer for their actions. I was included. Despite my protest and the production of my SPGB membership card and badge, I was accused of being a Communist by Arthur Deakin who acted as a prosecutor.

As a result of the inquiry all but one of the Central Bus Committee, together with a few others, were dismissed from union office. In 1938 some busmen, including a few Socialists, set up the National Passenger Workers' Union as a rival to the TGWU. Other Socialists, and this well shows how we can come to different conclusions on trade union tactics, opposed this move "on the ground that a new union could do no more than the existing one till members were class conscious and that the effect would be to divide the busmen and thus weaken them". The NPWU did not really stand a chance. It did carry on till after the war when the TGWU, by signing a closed shop agreement with London Transport, was able to squeeze it out. In 1943 the CP declared that as the NPWU was "a hotbed of every kind of anti-working class politics - SPGB members, ILPers and Trotskyists" no member of it could join the CP. The Socialist Standard of 1943 commented:

With the issues involved in the dispute between the rival unions we need not here concern ourselves except to say that members of the SPGB are to be found in both unions.

The union's national organiser was in fact a Socialist. The same man was later to national organiser of another breakaway from the TGWU, this time in the docks, the National Union of Port Workers. The Socialist Standard had to make the same point again in October 1946 when a pro-Labour paper tried to discredit a strike in which this Socialist was active on the grounds that he was an opponent of the Labour government.

After the war the TGWU brought in a rule that barred members of Fascist and Communist parties from holding office (this rule still applies, but may be relaxed soon for the Communists). All candidates for union office had to sign a document saying that they were not members of these parties. Socialist in the union were quite opposed to this because they


objected to political discrimination in a trade union, claiming that members had the right to nominate any other member they wished irrespective of politics, race, religion, etc.

When later one Socialist did sign the document "the better to fight against political discrimination and other objectionable union policies", he found himself with the unwelcome support of the Communists (our members in the ETU have experienced the same thing since that union too barred Communists from holding office). Our member, who had been elected to committees at all levels of the union, was very active in the 1958 London bus strike. Socialists contributed regularly to The Platform, the unofficial busmen's journal, which ceased publication in 1967 after some seventeen years on the retirement of its editor (a sympathiser of the Socialist Party). "When Frank Cousins came on the scene", one says, "the CP heralded him as a Trade Union Messiah and carefully abstained from saying a word against him". Other socialists have had similar experience of CP tactics in other unions. At present the CP are trying to channel industrial discontent behind men like Cousins and Scanlon and the leftwing of the anti-working class Labour Party.


The first white collar strike in Bristol Siddeley Engines factory took place in February 1961. It was staged by sixty members of the Association of Engineering and Shipbuilding Draughtsmen (now DATA) in support of their "collecting member" (or shop steward) who was the only one in the office not to get a pay rise. The one week strike became official and was successful. The victimised man, a member of the Socialist Party, got his rise. A couple of years later this Socialist was elected chairman of the local DATA branch and as such played an important organising role in a strike over pay that began in the same factory in June 1963. The Bristol Evening Post described our member as "leader of the 1,000 Bristol Siddeley workers who are on strike". This of course was not so as Socialists are opposed to all leadership, on the industrial as well as on the political front. Our member's protest was published in the paper on 16 July:

May I, as chairman of Bristol No. 2 branch of DATA, thank you for the way in which you have to date, covered our dispute with BSE Ltd. But as an individual member I wish to deny that in any way am I the Leader of the 1,000 members who are now on strike. I am their elected Representative and as such, with the rest of the annually elected branch, try to carry out, to the best of one's ability, their wishes which are decided in a democratic way, either by secret ballot, or by show of hands at a general meeting. I regard this as a very important distinction.

The same member (who as branch chairman again had an important role to play in 1965 in the struggle against redundancy following the cancellation of the TSR 2,) described the six week's strike, which was controlled by the strikers and successful, as "the best organised and successful ever. It was a show down between DATA and the employers nationally and cost DATA £180,000. The members levied themselves towards local costs and paid 5% of their salaries back to DATA". DATA in fact is one of the most successful unions in Britain, consistently pursuing an aggressive wages policy.

These, then, are two examples of how Socialists are involved, in a democratic way, in waging the class struggle  on the industrial front. We could have quoted more examples but we think these suffice to nail the lie spread by those would-be leaders, the CP and the trotskyists that the Socialist Party is anti-union.
Adam Buick