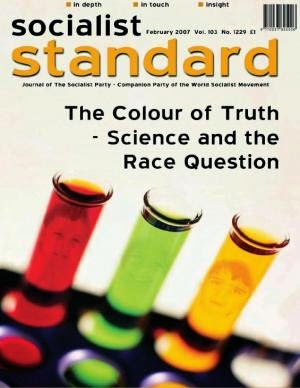 From the February 2007 issue of the Socialist Standard
It was probably a rich person who devised the saying, "Money can't buy happiness". But there is more truth in the cynical retort that at least it allows you to be miserable in comfort
Money, is portable wealth, a universal medium of exchange that gives its possessor the power over most things. It is the ultimate commodity, the embodiment of capitalism. The poet Shelley put it rather well:

"Paper coin, that forgery
Of the title-deeds which we
Hold to something of the worth
Of the inheritance of earth."

The Marriage of Figaro

Mozart's Le Nozze di Figaro with a libretto by Lorenzo Da Ponte was performed last year at the Royal Opera House, Drury Lane, London in Italian with English subtitles. The opera is based on the banned play Le Mariage de Figaro by Beaumarchais, and was originally staged just before the French Revolution. Later Napoleon called it 'the Revolution already put into Action.' The major themes of the opera are sex and class conflict.


Christopher Maltman as Count Almaviva is predatory, displays contemptuous hauteur, and wants to revive the 'droit du seigneur', a nobleman's prerogative feudal right allowing him to have sexual relations with a subordinate woman which was also known as 'jus primae noctis' ('first night'). Luca Pisaroni as Figaro, the barber turned valet and major-domo to the Count denounces this 'offending right' when he discovers the Count intends to sleep with his fiancée Susanna. He sings 'Se vuol ballare' ('If you would dance'): 'Signor Contino, Il Chitarrino, Le Susnero' ('Count, if you come to my dancing school, you'll jump to my tune') and vows 'tutte le macchine rovescierò' ('all of your schemes I'll turn inside out').
Marriage for 'love' was a product of the rise of the bourgeoisie, freeing itself from the feudal norm of arranged marriage, and the notion of 'individual sex-love' was a source of inspiration for Mozart. Da Ponte removed political references such as replacing Figaro's speech in Beaumarchais against inherited privilege: 'Here a Master, there a Servant, according to the whim of fortune, being an aristocrat, having money, a position in society, holding public office. What have you ever done for all this wealth?'
Mozart was a Freemason, then a radical bourgeois reform movement extolling rationalist Enlightenment philosophy mixed with mystic humanism, promoting republicanism and brotherly love, and questioning the accepted idea that nobility makes someone worthy of respect. Mozart was a friend of Adam Weishaupt, founder of the Illuminati which espoused the humanist views of Rousseau and Diderot, and opposed the superstition and prejudice of the Roman Catholic Church. The Illuminati contended that social rank was not coincident with nobility of the spirit, but that people of lower class could be noble in spirit.
Mozart 'knew' his place in the feudal hierarchy as a servant to the Archbishop of Salzburg. Mozart described a typical dinner time: 'Our party consists of the two valets, the two cooks, and my insignificant self. Note that the two valets sit at the top of the table but at least I have the honour of being placed above the cooks.'
Mozart was the first composer to take the step into capitalism becoming a freelance composer in Vienna, selling his music on the market through subscription concerts and commissions. Mozart had moved into the world of petty commodity production.
************************************************************
Paul Klee


Klee contributed to the art and literature magazine Der Weg in Munich which in January 1919 proclaimed 'It is time for the revolution to create a revolution, under the stormy pressure of necessity one will not escape socialism.' With the establishment in Munich of the Bavarian Council Republic (Bayerische Räterepublik) on 6 April 1919 Klee wrote 'the Aktionsausschuss Revolutionäre Künstler (Action Committee of Revolutionary Artists) may dispose completely of my artistic capabilities.' Ernst Toller, Expressionist playwright briefly president described the Bavarian Council Republic as the 'Bavarian Revolution of Love.' This revolution was crushed by the Freikorps ('White Guards of Capitalism') on 3 May 1919 with 1,000 workers killed in street fighting, and 700 workers summarily executed in the following 'White Terror.'
Klee fled to Switzerland where he wrote to Alfred Kubin on 12 May 1919: 'this communist republic did give us the opportunity of checking our subjective in such a community. It was not without a positive result. Of course, exaggerated, individualistic art is not suitable for the general public, it is a capitalist luxury. That part of us which somehow aims for eternal values would be better able to receive support in a Communist Community.'
Klee's paintings of 1920 such as Aerial Combat, Memorial to the Kaiser and Christian Sectarian reflect the revolutionary times in Munich but most memorable is his Angelus Novus, the angel of history, part bird, part man, part angel. Walter Benjamin wrote of the painting in his 1940 Theses on the Philosophy of History: 'His face is turned toward the past. Where we perceive a chain of events, he sees one single catastrophe which keeps piling wreckage upon wreckage and hurls it in front of his feet. The angel would like to stay, awaken the dead, and make whole what has been smashed. But a storm is blowing from Paradise; it has got caught in his wings with such violence that the angel can no longer close them. The storm irresistibly propels him into the future to which his back is turned, while the pile of debris before him grows skyward. This storm is what we call progress.'
The Nazis described Klee as a 'cultural Bolshevist' and in 1937 included his paintings in the 'Degenerate Art' exhibition.
Steve Clayton
Posted by Imposs1904 at 2:14 PM No comments: