Harry Potter and the Unchanging Church (2009) 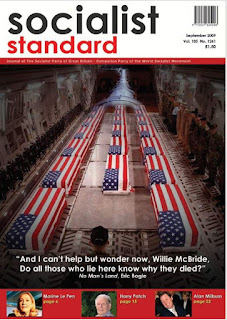 From the September 2009 issue of the Socialist Standard

Amongst the crazier news items to captivate the hacks of what used to be Fleet Street surely the one about the Pope and Harry Potter must takes a bit of beating. In a world of widespread poverty and hunger, global pollution and the threat of a nuclear conflict, The Times saw the necessity of devoting a spread to this non-event.


"Once condemned by the Pope for undermining the soul of Christianity, Harry Potter has been forgiven. In 2003, two years before he was elected Pope Benedict XV1, Joseph Ratzinger, then a Cardinal and head of Vatican doctrine, said J.K. Rowling's stories of the boy wizard threatened to corrupt an understanding of Christian faith among the impressionable young. ... Now however the Pope seems to have fallen under the Potter spell. The latest in the film series, Harry Potter and the Half-Blood Prince, is on general release in Britain today, and has won surprising praise from the Vatican newspaper L'Osservatore Romano" (London Times, 15 July).

The basis of the Times's surprise seems to be the changing of the unchanging church, but the history of the Roman Catholic religion is one of change to accord with the changes in the non-spititual world. Indeed the church's backflips have been many and the Times article even listed a few of them.

Until the Second Vatican Council, in 1962-65, Catholic Mass was celebrated only in Latin. In 2003 the Church withdrew a threat to excommunicate the parents of a Nicaraguan girl aged 9 who had an abortion after being raped. 26,000 signed a petition against the move. In 2007 they abolished Limbo, a sort of halfway point between Heaven and Hell. All these recent changes are in addition to Pope John Paul II in 1992 finally admitting that the Church was in error 359 years before when they condemned Galileo for claiming that the Earth revolved around the Sun.

In order to survive the Roman Catholic Church has had to change in line with how secular society changes. There are some unchanging tenets of their practice however – their unfaltering support of private property and their collecting dishes at church services. The Lord may provide for the gullible faithful but the clergy rely on something more tangible for their income.
Richard Donnelly
Posted by Imposs1904 at 1:36 PM No comments: