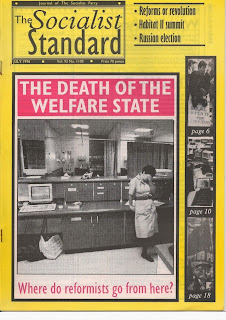 Editorial from the July 1996 issue of the Socialist Standard

Do television pictures of starving children make you angry? Would it make you more angry to learn that up to 20 million people die every year of starvation whilst tens of millions of tons of food are destroyed to keep prices high, and that farmers are paid vast sums not to produce food?

Are you astounded that an estimated 220 million people will be expected to have perished in wars fought during the 20th century? Could you believe that in almost every instance these conflicts broke out over trade routes, foreign markets and mineral resources - sources of present-day profit?

Are you concerned that tens of millions are unemployed around the world while factories are closed, and that countless thousands sleep rough in the world's major cities, whilst ten times as many houses stand vacant?

Are you frightened at the prospect of rising sea levels, deforestation and the depletion of the ozone layer? And do you despair at the threat to our planet from oil and chemical spills and nuclear accidents?

Undoubtedly you can answer yes to all the above. We could go on and fill many pages with similar questions. We are not morbid, but bring such catastrophic problems to your attention to prove that the society we live in —capitalism— is not fit for human beings to thrive in.

Production under capitalism is controlled by a small élite who also control distribution and communication networks. All wealth however, from a pin to an oil-rig is produced by workers—the majority, who sell their physical and mental energies to the owning capitalist class for a wage or salary.

Production under capitalism is primarily undertaken with a view to making profit for the capitalist class. This means that workers are employed and goods and services provided only when it is profitable to do so.

Socialists believe that such a social system is absurd and that the only way forward for humanity and planet Earth is the establishment of a world socialist system.

Socialism does not yet exist and never has. Some people believe socialism is associated with old USSR and China, but the evidence suggests that these countries have run their affairs no differently from, say, Britain and the USA.

Capitalism is a world-wide social system, and so must be its alternative—Socialism. It cannot exist in one country.

Socialism means that the resources for producing and distributing wealth (land, mines, factories, railways, shipping etc.) will be commonly owned and democratically controlled by the world's people.

For the first time, the people of the world will have a say in the running of their world. 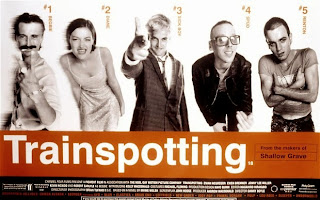 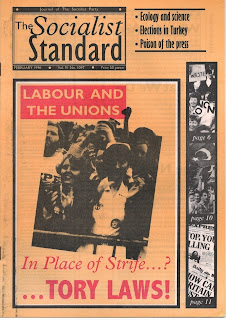 Editorial from the February 1996 issue of the Socialist Standard

Socialism is not just an ideal—a pleasant dream—a philosophy to keep in the back of your mind. If the ideas you read in this journal or have heard from a Socialist Party speaker have made you think that something can and should be done to change the world, then you owe it to yourself to do something about making socialism not just a great idea but also social reality.

There can be no Socialism without socialists. Liberation cannot be imposed upon people who are prepared to tolerate oppression and wage slavery. Until the vast majority of us realise the collective power that we have to transform society all of the sickening problems of world capitalism will persist—new ones will emerge—and eventually we might all be destroyed in the terrific explosion of one mass-murdering bomb. We must choose either to abolish the present social system or to be damaged and destroyed by it. The building of a movement of conscious socialists is a race against the destructive tendencies of the world-wide profit system. It is an urgent task.

"I don't want to be involved in politics." This is a common enough response from people who see the logic of what socialists are saying but are doubtful about the possibility of political change. You are right to have doubts. Only followers, marching to nowhere behind Major, Blair, Clinton, Yeltsin and the other professional mis-leaders, have blind faith in politics and politicians.

Socialists do not ask you to believe—we urge you to do your own thinking—to see how the present system is denying you so much and how the socialist alternative offers you so much more. Nobody in the Socialist Party poses as a leader. For Socialism to be achieved there is no need to politicians and followers, but conscious socialists knowing what they want and why they want it.
Posted by Imposs1904 at 3:02 PM No comments: 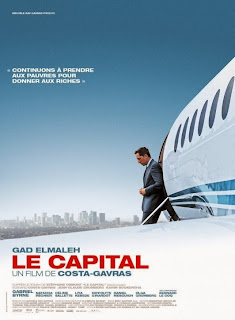 Film Review from the October 2013 issue of the Socialist Standard

Le Capital is a European financial thriller made in France by Greek director Costa-Gavras that had its première at the Toronto Film Festival in 2012, was nominated for the 2012 Special Jury Prize at the San Sebastian International Film Festival but to date has not been released in Britain. Costa-Gavras is notable for his Academy Award winning film Z (1969), Missing (1982) which won the Palme d'Or at Cannes and Music Box (1989) winner of the Golden Bear at Berlin.

Costa-Gavras based his film on the 2004 novel Le Capital by French banker Stephane Osmont but was also inspired by the book Totalitarian Capitalism by Jean Peyrelvade. The film stars Moroccan actor Gad Elmaleh and also Gabriel Byrne, the Irish actor memorable in the 1995 noir film The Usual Suspects.

Le Capital is a fast-paced film set in the closed world of investment banking full of cunning boardroom politics, billion-dollar banking takeovers, supermodels, corporate suits in jets globe-trotting from Paris to London, New York, Tokyo and Miami. The main protagonist played with a reptilian self-awareness by Elmaleh occasionally breaks the fourth wall and gives 'Brechtian' asides to the audience. Elmaleh has the best lines such as 'money makes people respect you, money is the master, money never sleeps'.

The film is dominated by memories of the global financial capitalist meltdown of 2008 caused by overproduction in the housing sub-prime market, deregulation of commercial bank securities such as the repeal of the Glass-Steagall Act, and the use of collateralized debt obligations (CDOs) and other derivatives described as 'financial weapons of mass destruction' by Warren Buffett. The crisis was such that Ben Bernanke, head of the US Federal Reserve, feared the end of capitalism and said of the $700 billion emergency bailout of banks: 'if we don't do this, we may not have an economy on Monday'. According to Roger C Altman in The Great Crash 2008 losses totalled $8.3 trillion.

Costa-Gavras makes reference to the 'cowboy capitalism' of a 'brutal hedge fund' who are 'preachers of instant profit'. Elmaleh delivers lines such as 'I am a modern Robin Hood who takes from the poor to give to the rich'. There is also a possible allusion to Dominique Strauss-Kahn, head of the IMF who in May 2011was subject to allegations of sexual assault. The working class represented by one character accuses the bankers: 'You are bleeding the world thrice, the markets want blood, you fuck people with lay-offs, you fuck them with loans and debt, money rots everything'. A female English banker with a 'conscience' delivers an indictment near the end of the film: 'Banks in the claws of predatory stockholders, the dictatorship of the markets, speculation, the rating agencies that run the economy for politicos that threaten society, democratic states that can no longer govern or get rid of banks who stifle them'.

Costa-Gavras concludes in Le Capital that the bankers 'have fun and will go on having fun until everything is blown up in pieces'.
Steve Clayton