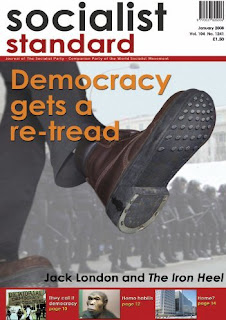 Preparations for a US attack on Iran are well advanced. American planes probe the country's air defences. Commandos infiltrate Iran on sabotage and reconnaissance missions. A new military base is built close to the Iraq/Iran border at Badrah. The Fifth Fleet patrols in the Gulf and along Iran's southern coast.

Political preparations also continue. Accusations against Iran are elaborated and repeated ad nauseam. Pressure is exerted (with variable success) on other countries to assist in the war plans. Aid and encouragement are given to separatists in ethnic-minority areas of Iran: Arab Khuzestan in the southwest, "southern Azerbaijan" in the northwest. Resolutions are pushed through at the U.N. Security Council and in the US Congress to create a "legal" justification for aggression.

Why are the dominant capitalist interests in the US so bent on war with Iran? The war propaganda provides a highly distorted and incomplete picture of the real reasons.

As with the attack on Iraq, the claim may be made, explicitly or implicitly, that the Iranian regime is connected in some way with Al-Qaeda. This time round the claim would be even more deceptive, as Iranian leaders denounced 9/11 and helped the US depose the Taliban in Afghanistan. The terrorism charge is also based on the real Iranian support of Hizbollah in Lebanon and Hamas in Palestine. This, however, means enlarging the meaning of "terrorist" to cover any armed movement that opposes the regional interests of the US and its allies. Finally, the US Congress has passed a resolution – supported, incidentally, by leading Democratic presidential contender Senator Hilary Clinton – declaring Iran's Revolutionary Guards (an elite section of its armed forces) a terrorist organization. This justifies military action against them as part of the "war against terror."


Another "disarmament war"?
Above all, the Bush administration claims that Iran is very close to acquiring nuclear weapons and that a nuclear-armed Iran would be an unprecedented threat to world peace. The same claim was used to justify the attack on Iraq. No nuclear weapons capability was discovered after the invasion, but the claim had served its purpose. Iran is enriching uranium for a civilian nuclear power program under IAEA supervision, but there is no evidence that its leaders seek nuclear weapons and it will not be in a position to produce them for several (perhaps ten) years. This is a consensus view of specialists not only at the IAEA but also at the CIA and Pentagon.

Nevertheless, Iran is a rising power with ambitions of exerting influence in a region crowded with nuclear powers (Israel, Pakistan, India, Russia and China, not to mention the US nuclear presence). As such it is very likely to acquire nuclear weapons at some point. It might be willing to barter the nuclear weapons option for international recognition of its status as a regional power, but that is precisely what the US and its allies are unwilling to grant.

While the risk of accident or miscalculation does increase with the number of nuclear powers, there is no serious reason to suppose that Iran would be more dangerous than any other state with nuclear weapons. All nuclear states are prepared to resort to nuclear weapons under certain circumstances.

"Nuclear non-proliferation" started as an international agreement to confine nuclear weapons to the members of a small exclusive club. It has now come to mean "disarmament wars" to deny nuclear weapons status selectively to regimes considered hostile to US interests (listen to an interview with Jonathan Schell on www.therealnews.com). The US seeks to prevent Iran from going nuclear because it would shift the balance of power in the Middle East, making American nuclear capabilities less intimidating and depriving Israel of its regional nuclear monopoly.


Oil and gas, dollars and euros
While the US does want to prevent Iran from eventually acquiring nuclear weapons, this does not explain the urgency of the preparations for war. The key factor is control over resources, in particular oil and natural gas. The US seeks to restore and maintain control over the hydrocarbon resources of the Middle East, a region that contains 55 percent of the world's oil and 40 percent of its gas.

The occupation of Iraq marks an important step toward this goal. The petroleum law that the US is imposing on Iraq will give foreign companies direct control of its oilfields through "production sharing agreements". Iran, which alone accounts for 10 percent of world oil and 16 percent of world gas, is the main remaining obstacle to regional domination.

Control over oil has various aspects. One is control over price – gaining the leverage to ensure the continued flow of cheap oil to the American economy. Another is control over who buys the oil. The country that buys the most oil from Iran is now China, a situation that upsets those in the US who view China as a major rival and future adversary. Arguably, however, the most important issue is which currency is used to price and sell oil.

As the position of the dollar in relation to other currencies weakens, the dollar is ceasing to function as the world's main reserve currency. Countries are shifting their foreign exchange reserves away from dollar assets toward assets denominated in other currencies, especially the euro. Dollar assets now constitute only 20 percent of Iran's reserves.

Similarly, oil producers increasingly prefer not to receive dollars for their oil. In late 2006 China began paying for Iranian oil in euros, while in September 2007 Japan's Nippon Oil agreed to pay for Iranian oil in yen. Continuation of this trend will flood the US economy with petrodollars, fuelling inflation and further weakening the dollar. It is feared that the result will be a deep recession.

Occupying oil-producing countries may seem like an obvious way to buck the trend, although the effect is bound to be temporary. In 2000 Iraq began selling oil for euros; subsequently it converted its reserves to euros. Since the US invasion it has gone back to using dollars. This may be an important motive for attacking Iran too.


The shifting geopolitical map
The collapse of the Soviet Union enabled the US to establish a temporary global geopolitical predominance, though at the cost of enormous military expenditure that exceeds that of all other countries combined. Like the dominant position of the dollar, this cannot last very much longer in view of the progressive economic decline of the US.

The geopolitical map of the world has begun to shift, and Iran occupies a central place in this process. The framework of a potential anti-U.S. axis exists in the shape of the Shanghai Cooperation Organization, which brings together Russia, China and post-Soviet Central Asia. American strategists fear further consolidation and militarization of the SCO and its expansion to draw in other major Asian states and, first of all, Iran, which already has close ties with both Russia and China. (India, though for the time being firmly aligned with the US, may follow.) So here too attacking Iran may be seen as a way of averting a threat to US predominance.

Senseless wars
There is a certain logic to the motives that drove the US to war in Iraq and may drive it to war with Iran. Nevertheless, these wars make no sense even in capitalist terms (let alone from the working class and human point of view). It is not just that costs are likely to exceed benefits, as was the case in Vietnam, for instance. They are senseless because under current world conditions the goal of securing long-term US predominance is unattainable. At most, the loss of economic and geopolitical primacy may be deferred for a few years, but it will be all the more precipitous when it does come.

The faction of the American capitalist class currently in power refuses to recognize this reality. Even their "mainstream" opponents in the "Democratic" Party are rather reluctant to do so. Admittedly, the top brass do not want another quagmire. Perhaps their resistance will save the day.