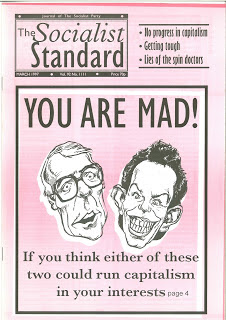 From the March 1997 issue of the Socialist Standard

The Socialist Party has no intention of forming a government and trying to solve the problems and conflicts of modern capitalism. It was certainly under no such illusion as was held by the Russian Communist Party—that a Bolshevik dictatorship could control capitalism in the interests of the working class. Instead, the Socialist Party offers to represent the views of those voters who are opposed to the continuance of the capitalist social structure itself, whether capital is controlled by the state or by individuals.

The employment problem exemplifies the conflict between the needs of individuals in society and the market forces exerted by capital. “Job creation” is something that capital tries to do all the time, since it is only through employing men and women who add value that capital can make a profit. But, of course, the booms and slumps of capitalism dictate that there are periods when a percentage of working people are of no use to capital. Whether such workers are left to starve or sustained by some sort of dole depends upon historical and geographical conditions. In Britain and many other western industrial nations government have recognised a vested interest in maintaining workers at a subsistence level until they are needed in the next upsurge in the economy. In spite of this there is, however, in every slump an attack on the living standards of the unemployed in order to reduce the costs of benefit to national capital.

A minimum wage is a concession that a strong working class can extract from its national capitalist class. It is exactly in times of recession, however, that the working class is weak. The threat to withdraw their labour in a strike by those who are employed presents very little problem for employers since there are so many unemployed ready to take their places. A minimum wage is therefore impossible to enforce during a slump, just the time when it is wanted.

Political parties which pretend that government has the power to seriously ameliorate the problems of capitalist society are deceiving the electorate: and so it is no wonder that voters in the West are deeply disenchanted with politicians and even the democratic process itself— a dangerous state of affairs. Even the limited democracy we have achieved, however, is seeping away because capital, as the social relationship it really is, is antithetical to genuine democracy.

What socialists want is a social context in which questions such as education, transport and housing are under the control of real democracy, not the economy and the insatiable drive for profit. We consider that capitalism urgently needs superseding by an organisation of society in which people will work, but not be employed; in which goods are produced because they are needed, not because of the expectation of profit; in which education is a process which individuals, children and adults, choose for themselves, not one which is compulsorily imposed upon them, primarily in the interests of employers.

Each of the problems people experience under the profit system arise not from the nature of existence or even the practicalities of producing and distributing resources, but from the poverty and ruthless competition which are inescapable features of the capitalist political economy throughout the world. To solve them what is required is not a change of government or of government policy, but a change of social system.