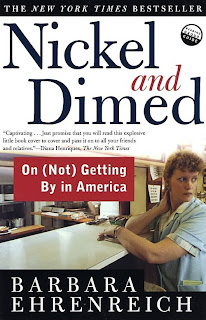 I love the passage below that closes the book. It's a shame that the excerpt is too long to be emblazoned on T shirts and bumper stickers. It hits the nail squarely on the head:

"Guilt, you may be thinking, warily. Isn't that what we're supposed to feel? But guilt doesn't go anywhere near far enough; the appropriate emotion is shame - shame at our own dependency, in this case, at the underpaid labor of others. When someone works for less pay than she can live on - when she, for example, goes hungry so you can eat more cheaply and conveniently - then she has made a great sacrifice for you, she has made you a gift of some part of her abilities, her health, and her life. The "working poor", as they are approvingly termed, are in fact the major philanthropists of our society. They neglect their own children so that the children of others will be cared for; they live in substandard housing so that other homes will be shiny and perfect; they endure privation so that inflation will be low and stock prices high. To be a member of the working poor is to be an anonymous donor, a nameless benefactor, to everyone else. As Gail, one of my restaurant co-workers put it, "you give and you give and you give."

Someday of course - and I will venture no predictions as to when - they are bound to tire of giving so little in return, and demand to be paid what they're worth. There'll be a lot of anger when that day comes, and strikes and disruption. But the sky will not fall, and we will all be better off for it in the end."

George Bernard Shaw as a Guide to Socialism (1937) 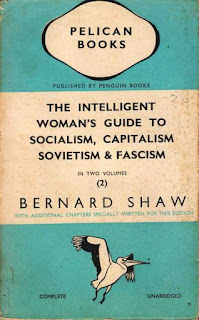 Book Review from the August 1937 issue of the Socialist Standard

Shaw’s The Intelligent Woman’s Guide to Socialism, republished in the Pelican Books series, in two volumes at 6d. each runs to nearly 500 pages and includes two new chapters on “Sovietism” and “Fascism.”

It contains in handy form Shaw’s views on a vast number of topics. It is an entertaining work with much well-aimed and swiftly-phrased sniping at the defenders of capitalism, but it provokes the obvious question: to what extent is Shaw a reliable guide to Socialism? In a review of the first edition Professor Laski claimed that the book had one merit which far outweighs all the faults: and up to a point Socialists can agree. The feature Laski had in mind was Shaw’s sustained and devastating attack on all the silly or dishonest arguments with which capitalists and their friends defend inequality of income and property. That is a useful piece of work and one still more necessary now that the advocates of inequality have been joined by some new recruits, the Communists, who are to-day anxious to repudiate Lenin’s sensible advocacy of equality.

With the rapid growth of inequality as a deliberate policy in Russia it remains to be seen how long Shaw will continue to regard the Soviet Government as an “amazing success,” for he says repeatedly that Socialism and inequality are quite incompatible – ”Socialism means equality of income or nothing” (page 468).

Socialists, of course, do not accept Shaw’s view – an essentially Utopian one – that there will be money-incomes under Socialism. Shaw shows in every chapter that his great defect is his lack of a thorough knowledge of economics and of the nature of capitalism. When he is blowing up capitalist pretences and prejudices he is good, but as soon as he tries to present an alternative he falls into the error of his Labour Party associates of thinking that the capitalist foundation can be made to support a Socialist system of society. He thinks that the production of goods for sale, the wages system and all the many financial and commercial institutions that minister to the needs of capitalist profit-making can be made the servants of Socialism. So he supports the idea of using “every device of taxation of income, restriction of inheritance and the like” to make incomes equal (page 442). He does not really see that the basis of capitalism is the private ownership and control of the means of production and distribution and that when this has given place to common ownership and democratic control there will be no need and no place for buying and selling, a wages system, money incomes, or a monetary system at all. It will be the job of the population to co-operate in producing the things needed by all and of distributing them freely to the population. Just that and nothing more. Shaw says Marx made a man of him. If only he had let Marx make a Marxist of him how he would have delighted to laugh at the absurd notion that under Socialism those who have produced the wealth by their joint efforts shall not permit themselves to consume it until they have first used a grotesque institution called a banking system to issue to themselves tickets-of-leave labelled banknotes or wasted useful metal on coins of the realm.

This brings us to Shaw’s indefensible attitude towards Marx. He repudiates most of the important theories for which we are indebted to Marx, but nowhere does he give a valid- reason. Always it is some smart irrelevance.

He rejects Marx’s theory of value as “a blunder which was presently corrected and superseded by the theory of Jevons” (page 464), but the reader is left to guess where Marx is supposed to have erred. He finds the Materialist Conception of History to be “easily vulnerable to criticism as a law of nature” (page 465), which would be interesting if Marx or any one else had ever offered it to us as a law of nature. He says that the Bolsheviks nearly wrecked Russia by following Marx, but does not substantiate the statement that they followed Marx, which we, as Marxists, deny.

Altogether Shaw is a bad guide to the basic principles of Socialism because he was unable or unwilling to learn them before offering to teach.

He has, however, a merit which lessens the harm he may do in that direction, the merit of saying plainly what he thinks. Because he is never ambiguous his self-contradictions stand out for all to see. There must be few people who can persuade themselves that they can agree with all Shaw says, so they can hardly fail to start thinking on their own account when they find him wittily “proving” that black is simultaneously both black and white.

Many instances of his contradictions and of his habit of turning and rending his friends come to mind. He says that Russia is an “amazing success,” which pleases the Communists, but it is only a few years since he found Italian Fascism also an “extraordinary success” (see correspondence in Manchester Guardian during October, 1927) and since he violently approved the “civilising” conquest of Abyssinia by Italy (see letter to The Times, October 22nd, 1935).

His friend, Lord Passfield (Sidney Webb), goes into raptures about the new Russian constitution, but although Shaw recommends his readers to learn all about Russia from the Webbs’ Soviet Communism he goes on to describe the new constitution “as a feat of window dressing to conciliate Liberal opinion in Europe and America” (page 442).


“By which the proletariat is much more effectively dictated to for its own good than under our system.”

Whether the Russian workers think it is for their own good Shaw, with his innate preference for rule by the “intelligent minority,” i.e., by himself and his fellow-Fabians, would never dream of asking. Shaw has done much harm by his ridicule of democracy and praise of dictators and dictatorship. Typical pronouncements are : –

What Shaw never discloses is that he himself, in the Fabian Essays, and elsewhere right up to the War, helped to encourage the illusion that we could make progress to Socialism by using Parliament to introduce social reforms. Now he scorns the notion and turns to dictatorship, but he has not the grace to say that the S.P.G.B. opposed and exposed the fallacies and dangers of that policy right from the start. Nor does he see that reformism by dictatorship is not one whit better than reformism by democratic means.

One last instance of Shaw’s limitations touches on his inability to discriminate between men of substance like Marx and a political-journalist like H. G. Wells. In a letter to the Bolshevik paper Isvestia (published in the Daily Herald, December 8th, 1924) Shaw wrote flatteringly of Trotsky, but added this criticism : –


“But even he has allowed himself to speak of Mr. H. G. Wells with a contempt which shows that he has not read Mr. Well’s Outline of History, and has, therefore, no suspicion of what an enormous advance, on Das Kapital that work represents.”

Shaw went on to criticise Lenin, too, for his lack of appreciation of Wells and said that since Wells was not duly esteemed:


“What hope is there of any understanding for Mr. Sidney Webb (another English writer who has gone far beyond Marx) or for Mr. Ramsay MacDonald, or, may I say, for myself ?”

Doubtless, Shaw will say that his own reputation has risen since 1924, but even he must wonder now at his own stupidity in comparing the Wells, Webbs and MacDonalds with Marx. But perhaps not. Perhaps he still believes that it is better for the workers to trust in a MacDonald, a Wells, a Mosley, or Hitler than trust in themselves.
Edgar Hardcastle