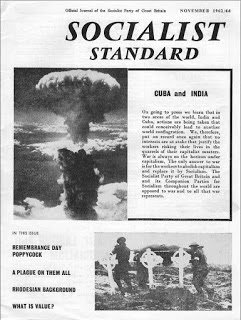 The system which exists today in Russia is clearly capitalism. All the classic features of capitalism are there — commodity production, wage-labour, employment (which couldn't exist without employers and employed), currency, the coercive forces of the state, and so on. Naturally, the historical background of the development of capitalism in Russia, and the immediate circumstances in which capitalism came into being there, meant that some minor details of capitalism in Russia differ from details in those countries where capitalism had a longer and slower development. In particular, the very speed with which the old system collapsed, and the new one was introduced, demanded that the state itself, the central committee of the capitalist class, should play a much larger part in the establishment of the new order than it had done in western Europe and North America. Of course, since that time state capitalism has been more and more introduced into the older-established capitalist states; but it has not yet, and one does not know if it ever will, come to play such a part in Western capitalism as it does in the capitalist systems established in Russia, China, India, the African states, and so on.

However, even in these comparatively minor details, there is coming to be less and less difference between Russian and Western capitalism. Not only are state planning and control playing a larger part in western capitalism; other changes are being mooted in Russia itself. As The Times said on October 3rd, “Proposals are at present under discussion in Russia to link the remuneration of workers to the profits made by their enterprises in relation to the investments made in them.” Since these and other proposals have aroused controversy, Pravda has recently printed what it calls "a previously unpublished version of a document dictated by Lenin in 1918.”

“Lenin argued that political victory over the capitalists had been won and the struggle was passing to the economic sphere. Those who had formerly sought to sabotage the Bolshevik cause were now (in 1918) offering their services to the new state. It was of the utmost importance to take advantage of these offers and harness to the communist cause the best methods and systems of capitalism. “He proposed that highly paid experts be hired from the United States and elsewhere as consultants and managers. Bourgeois staff and also their methods of labour organization could be used if they helped to raise production. The old world had created systems of labour organization which were diabolical methods for exploiting the worker. At the same time these systems are ‘the last word in the scientific organization of production' and should be copied in the Soviet Union where they would lose their noxious character.

“An example was the system of Mr. Mr. F. W. Taylor, the American engineer who perfected “scientific management”—on which present day time-and-motion studies and “work study” are to a large extent based. “We must apply Taylor’s system and American scientific methods of raising labour productivity throughout Russia,” Lenin wrote, for under Soviet conditions it would lead to a shortening of working hours and an improvement in conditions of work.” The Times 3/10/62

All Lenin was calling for was what could have been expected from any leader of a new capitalist revolution: the application of the latest and best methods (best, that is, from the capitalists’ point of view) which had been evolved in the older capitalist states. As might have been foreseen, when Lenin attempted to square all this with his own statements that the Bolsheviks were really introducing Socialism in Russia, common sense was thrown overboard. Pravda even quotes him as saying that “Socialism has to be learnt to a great extent from the leaders of the trusts, Socialism has to be learnt from the major organizers of capitalism.”

These statements, quoted by Pravda from the greatest figure of the Russian revolution, must surely go far to convince anyone who is still open to reason that Russia is capitalist.

On the back of The Times recently there were some photographs of scenes in Peru, and the text beside them read “Peru is a land of contrast and anomaly. It is a rich country where there are also austerity and poverty.”

No wonder there is a saying that the onlooker sees most of the game. The writer of the text saw clearly the social position in Peru. Perhaps if he lived in Peru, he would see just as clearly the “contrast and anomaly,” the riches and poverty side by side, which exist in Britain.

Not long ago there was an advert in the daily press from a man who claimed he had amassed £300,000 “through hard work.” As it stands, no one could take exception to the statement. It would be impossible for anyone to amass three hundred thousand pounds without a great deal of hard work.

In fact, only one question remains unanswered.

Whose hard work was it?
Alwyn Edgar