Theatre Review from the April 1995 issue of the Socialist Standard

Playwrights, like ordinary mortals, are creatures of their time. Whether unconsciously or as a matter of intention, most playwrights reveal in their story-lines and their dramatic pre-occupations, their characters and their dialogue, a view of the society of which they are a part.

August Strinberg's Easter (RSC, Barbican) is full of symbolism and illusion. It describes events in the life of Elis Heyst, a manic-depressive Norwegian schoolteacher in three fateful days between Maundy Thursday and the Saturday before Easter Sunday. It is filled with references to Christian suffering and the possibilities if redemption; to the coming of spring after a Scandinavian winter; to guilt associated with a father's imprisonment for embezzlement; and, finally—so it seems—to forgiveness and charity. It is marvellously presented by a gifted cast in the crucible-like atmosphere of The Pit, to the echoing sounds of Bach's St. Matthew's Passion and against a slide-show of paintings from The Last Supper and the Crucifixion. The atmosphere of religiosity is tangible.

Critics in the national press have responded to the moving last act as well they might. The ideas of forgiveness and charity might have been appropriated by Strindberg and given expression in the world of late nineteenth-century capitalism and Christian belief, but their benevolent, life-enhancing notions have a universal, timeless relevance. Indeed socialists see them as part of the common currency of life in a world based on co-operation rather than competition, happiness rather than angst.

What is especially interesting in both the play and also the reactions of the audience (and the critics) to it, is the way in which forgiveness and charity have been stolen and given expression within the values of capitalist society. Several times an apparently merciful redeemer makes clear to the unfortunate Elis that "it all comes back": that he (Elis) is to be forgiven because long ago his father—and languishing in jail—behaved charitably to the redeemer. This makes forgiveness not so much a gesture of magnanimity as a commodity to be exchanged on an "I'll scratch your back if you'll scratch my back" basis.

This marketing of forgiveness and charity escaped the notice of the critics in the national newspapers. Clearly it isn't only playwrights who are ensnared by the ideological beliefs of the society of which they are a part. Most of the audience and the critics are victims of the same kind of prejudices.
Michael Gill
Posted by Imposs1904 at 7:23 PM No comments: 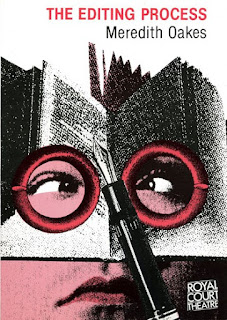 Theatre Review from the January 1995 issue of the Socialist Standard

The Editing Process by Meredith Oakes, The Royal Court Theatre.

Meredith Oakes's play The Editing Process is apparently about the take-over of a small magazine by a predatory capitalist entrepreneur. Enter the new owner's efficiency expert, together with the corporate image consultant, and activities are rationalised, savings (sic) realised, and talk of redundancies is in the air.

Michael Billington in the Guardian complains that the play refuses "to expand into a metaphor for the crisis currently affecting the publishing business". And Billington is right. There is no acknowledgment of the larger world in which the characters operate.

Oakes is good at showing the importance of work: revealing the impact of work on personality; pointing to its centrality in life, as the basis of most social relations. But, according to Oakes, behaviour has no economic and social reference points. Displays of power and dependency at work are seen as matters of individual choice and not as concomitants of the social relations of work. Indeed in defence of her position Oakes writes in a letter to the Guardian that "whatever system prevails, a power is sought by a few people. The quality of society depends on the moral choices those people make, not the political labels they wear".

Socialists see this as just plain wrong. Power is not a universal to be forever the basis of struggle and conflict. Power is a feature of an economically-divided society, and its generalised appearance is rooted in economic divisions. Oakes sees power and morality as independent variables: socialists recognise the primary impact of economic divisions in determining the character of ideas in what Marx called "the superstructure of society".

Within its limitations The Editing Process is a revealing, often very funny, play which us presented with wit and panache. But it is fundamentally flawed. Its characters and their actions are economically and socially adrift. Their behaviours are rooted in personal whims and idiosyncrasies that lack for economic and social underpinning. Like statues without legs Oakes's characters have separated from the economic foundations which might have more adequately accounted for their actions. The result is a series of undimensional snapshots of a world which properly demands a multi-dimensional focus.
Michael Gill
Posted by Imposs1904 at 6:39 PM No comments:

From the November 1979 issue of the Socialist Standard

A group of socialists recently attended a meeting of the Friends of the Earth at Sunderland YMCA. It had been advertised as an open public meeting, all ideas welcome. There was a crowd of about fifty, mostly students, and we sat at the back of the room to listen to what the speakers had to say.

There were three speakers, two from the Industrial Common Ownership Movement (ICOM). One talked of alleviating unemployment by creating 'Worker Controls' in which workers would commonly own their industries, and capital investment (which would also be commonly owned) would be used in the interests of the workers. The 'Worker Controls' would also be used to teach workers how to run their own affairs (how nice). The other ICOM speaker said that one of their members was at present investigating ways to solve 'over-population' and food shortages.

When it came to question time, one if us asked the speaker to explain the cause of unemployment "since you must know the cause before you can attempt to solve the problem". The ICOM speaker replied that there were various causes of unemployment, then relapsed into a tone such as to be inaudible to anyone. The member answered his own question: "Capitalism is the cause of unemployment, and your energies should be directed at removing the cause. men and women are thrown onto the dole because they are of no further use to their employers. Perhaps the market is 'glutted', but there must be a reserve army of labour ready for use when the market demands." Amazingly enough, the ICOM speaker replied that there was plenty of demand, but forgot to add that needs do not constitute market demand.

Another member said:"You say that workers will learn how to run their own affairs in these 'Worker Controls', but workers control everything now. The working class run capitalism from top to bottom. You won't find a capitalist soiling his hands with work." No reply. Another socialist rose and said that 'overpopulation' is a myth and the ICOM speaker stands accused of helping to spread dangerous myths. If half the starving people were removed tomorrow, the other half would still starve. It would not make an iota of difference. The accused, and red-faced, speaker stormed out of the room, not to be seen again that night. At that moment a member of the audience (or perhaps another member of ICOM) stood up and said, "I've had enough of this" and, "Perhaps our friends would like to leave".  (I wonder if they are that friendly with whales!)

They then proceeded to discuss 'Worker Controls', perhaps hoping that they had silenced us, but they hoped in vain. for another of our group said, "Obviously production in 'Worker Controls' would have to meet market demand, so in a situation where one group of people needed food but had no money (which is not market demand) and another group wanted arms and had the money (which does constitute market demand), the workers would have to produce arms." "I cannot see a workers' co-op producing arms", said the ICOM speaker. "Then I am afraid the only alternative would be the sack", said the member. We were then invited to leave. Why? Because the speaker decided to close the meeting after a very brief question time. We did not get the chance to put our case at this meeting, but we will continue to attend meetings that are 'open' to us.
Vince Maratty (North East Branch)