The Whole of Capitalism is Unacceptable (2012) 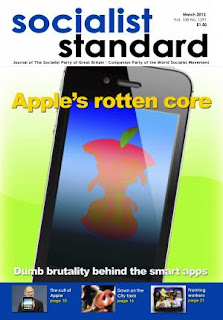 Editorial from the March 2012 issue of the Socialist Standard

Following the 2010 General Election, the new government published the Conservative- Liberal Democrat Coalition Agreement. In this initial policy document were proposals to reform banking, which stated: “We will bring forward detailed proposals for robust action to tackle unacceptable bonuses in the financial services sector...” But what is an “unacceptable bonus”?

Should RBS bank boss Stephen Hester have been forced into waiving all his bonus, worth almost a million pounds? Is it okay that Barclays Bank Chief Executive Bob Diamond is getting a bonus estimated to be around £2million: or should it be less? The total amount of bonuses to be shared out around the City for the 2011-2012 period is £4.2 billion – that’s £2.5bn less than in 2010-2011 but peanuts compared with profits that capitalist firms rake in. Is that still too much? What should the amount be?

When it comes to answering questions like these, to paraphrase Rhett Butler, frankly, any socialist or right-thinking person won’t give a damn. Not about the greed and gross inequality, but about trying to come up with palatable reforms.

How much bankers get paid compared to teachers, nurses or refuse collectors is a distraction from the real problem, which is that a tiny minority have a right to own vital natural resources and industrial assets that provide the majority with all of the products and services that make life possible and acceptable and only allow those resources to be used if there is a profit in it for them.

Politicians encourage people into wanting, believing or hoping that capitalism can actually be made fair, when it can’t. For this deception they employ a we’re-all-in-this-together rhetoric and insincere calls for “responsible capitalism”, “performance-linked pay”, “value for money for taxpayers” and “rewards for success, not failure”. Reactionary newspapers and broadcasters play their part in spreading and reinforcing this futile reformism with their sole focus on capitalistic so-called ‘solutions’. And to be seen on the side of the austerity-penalised majority during an economic crisis, populist exercises are undertaken, like taking away an ex-banker’s knighthood or pressurising a few out-of-favour executives into trousering less money than usual (which can always be got back when the heat’s off).

If most voters just want to see the pay and bonuses of bankers cut back because their greed helped crash the economy, or because they don’t deserve the sizeable amounts they get, or because there’s such a thing as a fair profit, then there’s never going to any meaningful and lasting progress made. While capitalism carries on, there’ll always be widespread inequality in incomes and living standards because capitalism is irreversibly a system that exploits the many to benefit a few. Always has been. Always will be.

The alternative – a classless, moneyless socialist society – is actually very easy to achieve and maintain. A clear majority just knowing what it is and wanting it can bring it about. And as a much more efficient, unwasteful and uncomplicated system, compared to the present one, keeping it going certainly isn’t going to be a problem (not something that can now be said about outdated, failing capitalism).

Seeking to reform the bonus culture will achieve nothing because capitalism can never be made nice. It only thrives on inequality, ruthlessness and selfishness. Only completely replacing capitalism with real socialism will permanently end the disgusting inequality and greed seen in the present class-divided society.
Posted by Imposs1904 at 9:34 PM No comments:

Book Review from the March 2012 issue of the Socialist Standard

Several of the chapters in this volume are based on work which has appeared elsewhere. For instance, the chapter by Socialist Party member Adam Buick re-uses passages from the Socialist Standard.

It is certainly refreshing to come across a book that deals seriously with the idea of a world without money. As the editors say in the first chapter, ‘for us non-market socialism means a money-less, market-less, wage-less, class-less and state-less society that also aims to satisfy everyone’s basic needs while power and resources are shared in just and “equal” ways.’ A number of different perspectives on such a society are presented, some of which are more persuasive than others.

Two chapters look at small-scale attempts to live without money. One deals with the Twin Oaks intentional community in Virginia (http://twinoaks.org), which relies on a very complex system of labour credits. The other covers the squatter community in the Barcelona area. The squatters live by, for instance, recycling food (which would otherwise be dumped) from the port area, but they do need small amounts of money.

John O’Neill and Adam Buick deal with the economic calculation argument that in socialism there can be no single unit by means of which alternative actions can be compared (such as prices supposedly provide under capitalism). They point out that no such unit would be needed, since decisions can be taken by considering alternatives directly. Nor is some vast central plan needed.

Terry Leahy contributes an interesting essay on a gift economy where ‘products are either consumed directly by producers or made available to others as gifts’. This is a standard concept in the work of anthropologists looking at pre-modern (and some modern) societies, and it’s worth entering ‘gift economy’ in an internet search engine. It might be acceptable as a partial characterisation of socialism, except that in a complex industrial society producers cannot consume much of their own products, and most goods are produced by many different workers co-operating at different stages. Leahy also emphasises the role that might be played by hybrids of a gift economy and capitalism, developments which involve increased control of production and distribution by producers on some basis other than profit. The idea is that these hybrids could gradually be expanded so that ultimately a gift economy could take over from capitalism completely. Now, it’s possible that, as the socialist movement grows, hybrid-type arrangements will become more common, as people increasingly reject wage labour, but it will hardly be possible for this to replace a revolution to make the world’s resources common property.

A final chapter by the editors reinforces this notion of a gradual changeover, including the idea of ‘non-monetary exchange’ (as opposed to the socialist proposal to abolish exchange entirely). Despite this, though, the volume as a whole offers a refreshing look at alternatives to capitalism.
Paul Bennett
Posted by Imposs1904 at 9:22 PM No comments: