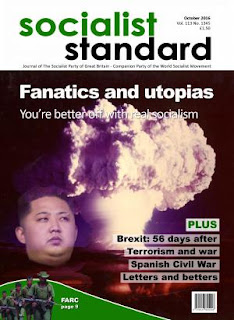 From the October 2016 issue of the Socialist Standard

On 9 September North Korea carried out yet another nuclear test. The further spread of nuclear weapons is inevitable while capitalism lasts.

It is now ten years ago that North Korea joined an exclusive octet of the US, Russia, Britain, France, China, Pakistan, India and Israel when it detonated a nuclear device which its neighbour South Korea recorded at 3.6 on the Richter scale. The group’s leader, a serial hypocrite and liar, responded immediately, with the White House braying: ‘an explosion would constitute a provocative act in defiance of the will of the international community’. The ‘international community’, being the name of the group, is very protective of their instruments, and the music they play, and new players can expect a discordant welcome. Thus the White House expected one its groupies, the UN Security Council, to ‘take immediate actions to respond to this unprovoked act’ (Guardian, 9 October 2006). Exclusion from the group meant North Korea was now a soloist intent on further developing its instrument. The leader of the group though felt reasonably secure as North Korea didn’t possess a nuclear warhead small enough to be mounted on a long range rocket, and thus capable of devastating targets as far away as the United States.

North Korea’s leader, Kim Jong-un, and by association the country he rules over are often depicted as comical, something we can safely laugh at, and thus swiftly dismiss. Two years after Kim Jong-un assumed supreme leadership of his country the 2014 film ‘The Interview’ was Hollywood’s shot at lampooning him that ends happily with a rescue for the movie's hero, a US talk show host, by an American Seals unit and a de-nuclearised North Korea advancing towards the American model of democracy. The trio of Hitler, Stalin, and Mao whose state policies were directly responsible for the murder of tens of millions of people were also early targets for satirists. Charlie Chaplin, who lampooned Hitler in the 1940 movie ‘The Great Dictator’ said later: ‘that had he known the true extent of Nazi atrocities, he could not have made fun of their homicidal insanity’.

Is it insanity – or just normality?  Killing people is big business. Developing and manufacturing weapons to kill is an everyday activity under capitalism.  Using them likewise. Whether it’s the evil dictator or the conventional elected leader neither has had any qualms about unleashing ‘blitzkrieg’ or ‘shock and awe’ or any of its deadly ilk when the circumstances demand it. Mass murder is ingrained in the social system as is the means to deliver it. North Korea’s own key arms dealer is the innocuously named Korea Mining and Development Agency (KOMID), and their military has its own little weapons enterprise called Hap Heng known to have provided missiles and nuclear technology to Pakistan and Iran. Syria has bought North Korean anti-tank guided missiles and KOMID has also been responsible for the sale of equipment, including missile technologies, gunboats, and multiple rocket artilleries, worth a total of over $100 million, to Africa, South America, and the Middle East’ (wikipedia).   North Korea doesn’t make it into the Top Twenty of arms dealing countries, but it probably rates highly in the Top Ten of international smugglers of nuclear and ballistic missile technology. Business as usual – just by other means.

The hydrogen bomb is the biggy. You can do a whole lot of killing with just one of these. Consequently all leaders desire one. Kim Jong-un is no exception. On 6 January, following on from three previous smaller nuclear tests, his dream may have become a reality. At the underground Punggye-ri Nuclear Test Site a detonation was carried out that the United States Geological Service measured as a 5.1 magnitude earthquake. The  South Korean government  played down North Korea’s declaration that it was a hydrogen bomb –unsurprisingly –because a back of an envelope estimate was that the ‘impact of such a weapon ‘detonated 1,000 meters over downtown Seoul would produce 78,000 fatalities and somewhere around 270,000 estimated injuries’. US ‘experts’ including those in the White House agreed with the South Korean scepticism.  However John Carlson, ‘a member of the Nuclear Fuel Cycle Royal Commission and former head of the Australian Safeguards and Non-Proliferation Office declared that previous North Korean tests were purely a primary stage, that is, a nuclear explosion, 'and fairly low yield at that'. However, in the case of this test, he added that 'if it’s true, it means they have made something  smaller scale, capable of being put on to a missile' and that North Korea would be aiming to develop a weapon 'small enough and light enough to put on to a missile, and the usual parameters are something less than one meter in diameter, and less than a tonne in weight’ (wikipedia).

On 24 August Reuters ran the headline ‘North Korea fires submarine-launched ballistic missile towards Japan’.  The Daily Telegraph reported that ‘the launch of the missile, which the US Strategic Command believes was a nuclear-capable KN-11 Nodong-D, came less than 48 hours after Pyongyang threatened to carry out a 'pre-emptive nuclear strike ' unless South Korea and the US cancelled joint military exercises’. The Japanese response to the launch came from the its Prime Minister Abe: ‘It is the first time that an SLBM (submarine-launched ballistic missile) has fallen inside Japan's air defence identification zone. . . It is a grave threat to Japan's security and an unforgivable threat to regional stability and peace’.  It’s believed that this successful test firing followed two recent failed ones.

A South Korean military official told Reuters: ‘North Korea's SLBM technology appears to have progressed' and ‘South Korea believes the North has a fleet of more than 70 ageing, limited-range submarines. . . Acquiring a fleet of submarines large and quiet enough and with a longer range would be a next step for the North’. Moon Keun-sik, a retired South Korean navy officer and an expert in submarine warfare added: ‘they keep conducting nuclear tests and SLBMs together which means they are showing they can arm SLBMs with miniaturised nuclear warheads.'  The Telegraph also printed a quote from those that wield the biggest stick: ‘The US Strategic Command issued a statement in which it said the launch posed no threat to North America, but added that US forces remain vigilant in the face of North Korean provocations’.

As yet the US mainland isn’t under threat. But the empire’s tentacles encompass the planet and ten years of North Korean weapons development is reaching a crescendo. We have lived under the threat of nuclear war since Nagasaki and Hiroshima. Pundits who tell us a nuclear attack will never happen forget that it already has. Other experts tell us it’s just around the corner. An insider, Robert McNamara, who worked as Defense Secretary for capitalism’s pin up boy, President Kennedy, during the Cuban missile crisis revealed how close we came to nuclear war when he ‘wondered aloud whether he 'would live to see another Saturday night,' and later recognised that 'we lucked out' – barely’(tomdispatch.com).

Art Buchwald reflected that ‘you can’t make anything up any more. The world itself is a satire’. Henry Kissinger, Yasser Arafat, and Barrack Obama winning Nobel Peace prizes wasn’t a comic invention unlike Kim Jong-un’s treatment in The Interview. Nuclear weapons and the means to deliver them aren’t a joke. Neither are Kim Jong-un and the elite that rule North Korea.