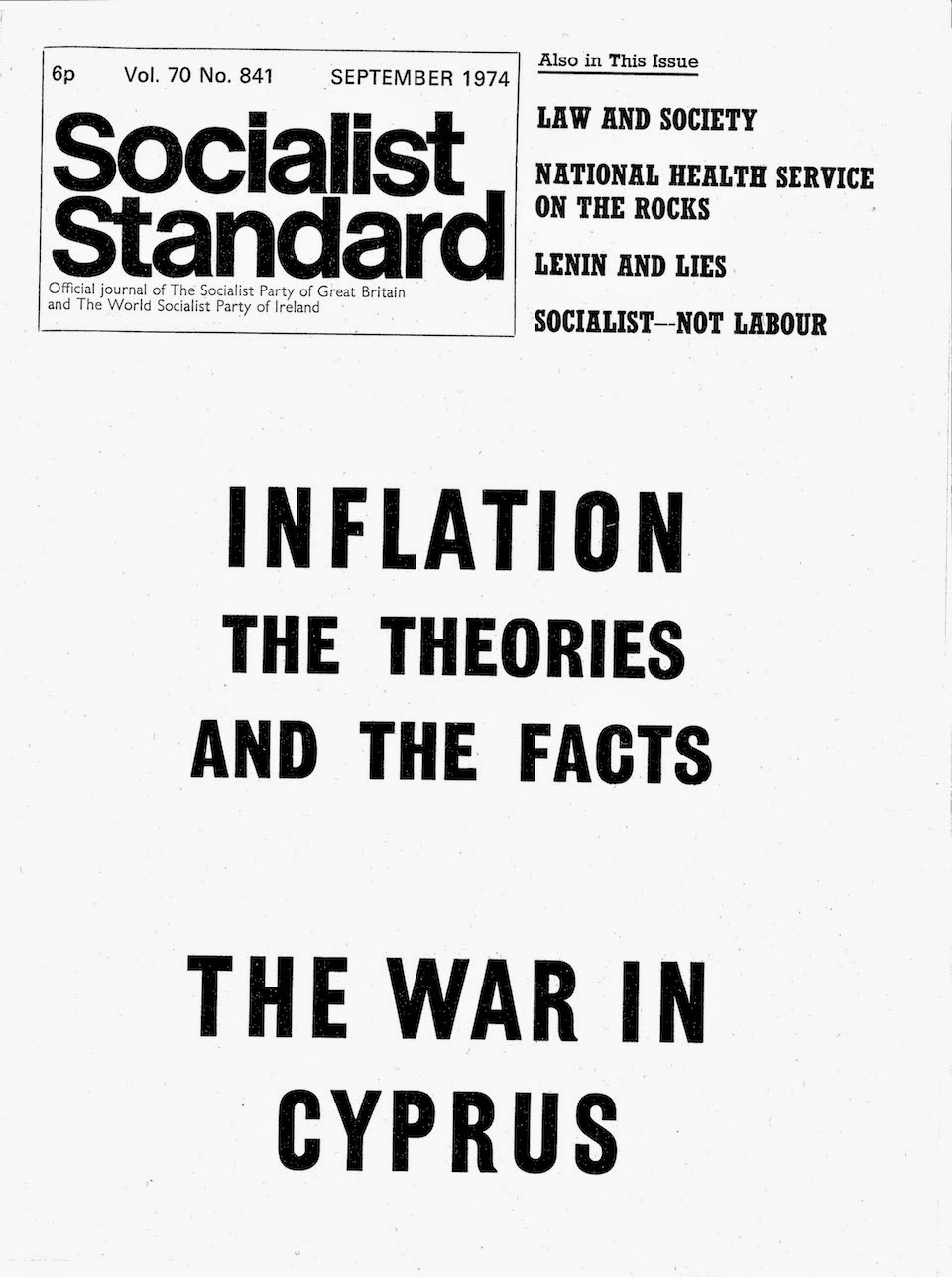 From the September 1974 issue of the Socialist Standard

"But who will do the dirty work" demand critics of Socialism. Well, it all depends on what one means by dirty work. Socialists look upon as dirty work that carried out by the armed forces of states and nations the world over. Killing, maiming, mutilation and brutality of infinite variety are part and parcel of the effects of capitalism the world over, and along with armed forces, would disappear in a Socialist world.

But such capitalist atrocities are not what the opponents of Socialism mean by dirty work. They are referring to menial, monotonous, poorly paid and unpleasant work.

Menial jobs in the sense of servants waiting upon masters would disappear under Socialism. No one need be servile in a society in which all the good things of life are freely available to everyone.

"But who will sweep the streets?" some demand. This old chestnut us well on the way out as, even under capitalism, many roads are cleaned by specially designed vehicles operated by the drivers. Most other "dirty" jobs could now be taken care of by vehicles or automatons in a similar way. But in any case these jobs cannot be described as lowly occupations. Who is to say who, amongst the manual, clerical and professional workers are the most useful or valuable to society when all are essential?

Public lavatory attendants are often cited as those having to do dirty work. But this is a job which some can and do take pride in. I have heard such attendants boasting of the spotless condition of "their" toilets. Indeed, on at least one occasion, one of those workers, interviewed on the air, staggered hardened radio interviewers by the obvious pride he took in his work.

Many jobs are thought to be unpleasant because of the poor levels of subsistence associated with them. Under Socialism there would be no poorly- (or well-) paid jobs. Work would be done because it would be necessary and because people would enjoy their part in it.

The navvy is often thought of as having a "dirty job" and he certainly gets dirty doing it (but then, so do professional footballers and nobody thinks of them as having to do "dirty work") but then there can be pride in the skill and strength needed to wield a fourteen-pound hammer, which explains why some people like watching navvies at work on a building site. There is a parallel between watching a navvy wield the hammer and watching a golfer wield a club. The latter isn't manual labour merely because the golf doesn't usually have to wield the club in order to earn a living (and might well arrive for the game in a Bentley!)

The jobs of nurses and doctors are glamourized with the business of sterility and asepsis—the scrubbing of hands, the dramatic life-saving operation, the laying of cooling hands on fevered brows, the taking of temperatures and the giving of "miracle" injections. In fact doctors and nurses get their hands far more unpleasantly dirty than people realize. Nursing can be a heavy, dirty job, especially mental and geriatric nursing, entailing cleaning and changing the clothes of incontinent patients. Yet nurses do it out of choice and, as most people realize, could hardly be pursuing their vocation for monetary reward!

As a medical student I hated the subject of pathology and couldn't imagine anyone wanting to carry out post-mortems or squinting down microscopes for a living. But practically all the pathologists I ever met brimmed with enthusiasm for their job.

It takes all types to make a world—fortunately for the Socialist.

Most medical students like and are keen about their calling, but not all. At least one would have settled for a "lowlier" lot in life. He told me he was darn sure he wouldn't go through six years of rigorous study to be a doctor if he could earn as much driving a cart.

Another medic who qualified without being dedicated was a square peg in a round hole, due to being the son of a wealthy family who wanted him to "do medicine". He just wasn't cut out for it and disliked it. He liked to get his hands dirty tinkering with motor cars and things mechanical in general. But his mother had a social status to preserve and simply "had to have a doctor in the family".

Thus, under Socialism there would be no clean or dirty work—only useful work due to society having within itself a ready hand wherever there is a human need.
R. B. Gill
Posted by Imposs1904 at 3:07 PM No comments:

Email ThisBlogThis!Share to TwitterShare to FacebookShare to Pinterest
Labels: Objections to Socialism, R. B. Gill, R1974, September 1974, Who will do the dirty work?

Sad news reaches us via the Socialist Courier blog:


Sadly, the Socialist Courier blog has to inform its visitors that Richard "Dick" Donnelly has died. He had been a member of Glasgow branch of the Socialist Party since the mid-1950s and was a regular outdoor and indoor speaker and frequently a contributor to this blog. Dick would probably be the first to tell the branch, "Don't Mourn - Organise!"
The Socialist Party website has a few recordings of Dick that are well worth listening to:

He was one of the best (and funniest) socialist speakers I ever had the pleasure to listen to. This is a massive loss to both the SPGB and to its Glasgow Branch. Condolences to both his friends and family.

I will make a point of posting some of Dick's articles and reviews from the Socialist Standard on the blog in the coming days.
Posted by Imposs1904 at 11:54 AM No comments:

The Illusions of Sir Oswald Mosley (1930) 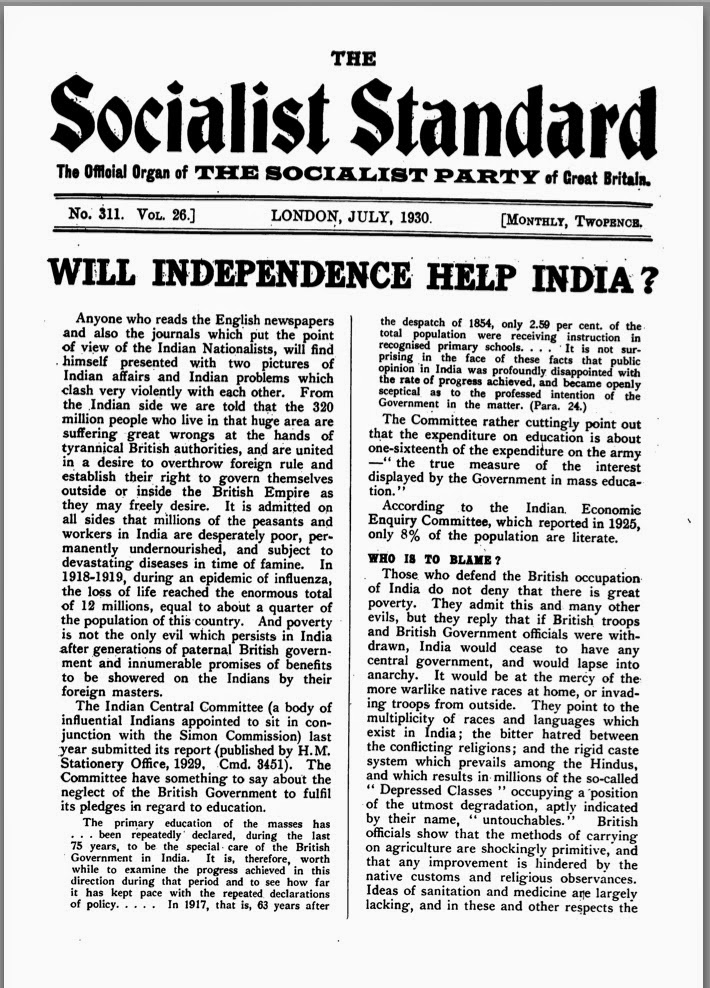 From the July 1930 issue of the Socialist Standard

Sir Oswald Mosley has resigned from the Labour Ministry and made a great noise with his proposals to deal with unemployment. Though they are largely taken from the official Labour programme (Labour and the Nation) the Mosley plans are criticised and opposed by "official" Labour. An examination of his schemes shows that they are borrowed very largely from the Liberal Party programme, and hence Lloyd George sings their praise.

Raising the school age, pensioning some workers over 60, and making roads, bridges, etc.—these comprise the cream of Mosley's programme.

Do they deal with the cause of unemployment? Will they absorb the unemployed? Will they stop industry adding to the army of out-of works? The answer is No! Like Lloyd George's platform call, "We can conquer unemployment," the Mosley schemes play with effects and merely carry on the ordinary repair work the capitalists need to make their industry more effective.

Take cheap wage slaves over 60 out of the factory. Does that mean younger and more expensive workers will be employed instead?

Past experience shows that women and machinery will be used to keep down costs whenever production expenses are raised by legislation or Union activity. Young boys and girls taken out of the factory will provide another inducement to rationalisation by means of machinery, etc., and so, instead of older workers being employed, cheaper methods of production will prevent the increased employment of older workers.

Mosley and Lloyd George schemes—like the Labour Party policy, official or otherwise—simply mean that the ordinary and normal work of making repairs to capitalism is boomed as special relief work. Where it is not that, it is like making new roads—an attempt to increase the efficiency of capitalist production and distribution of goods.

Thirty shillings per week as a retirement pension may sound inspiring to Mr. Mosley, the millionaire, but it simply means the most pressing poverty for a married couple after a lifetime of toil.

Lloyd George and the Liberal manufacturers are uniting with the Labour Party on a common capitalist programme, not to solve unemployment—but to capture votes and pretend they are helping the workers. Both Liberal, Labour and Tory pin their hopes on rationalisation, which increases unemployment faster than relief work provides work.

None of these parties of capitalism face the fact that modern industry constantly and continuously produces an unemployed army of workers. The only way to cure unemployment is to stop the cause—the class ownership of the means of production.
Adolph Kohn
Posted by Imposs1904 at 12:33 AM No comments: