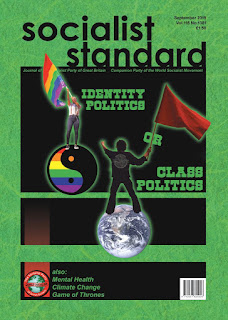 Editorial from the September 2019 issue of the Socialist Standard


Therefore, we cannot expect the problem to be solved within capitalism. All the signs point the opposite way. Consider the fact that this has been on the international agenda since the 1970s when scientists first expressed concern and nothing much has been achieved; emissions have even increased over previous decades. The agenda of all environmental activity groups, who seek to change things without completely scrapping this system, will prove to be futile.

Ultimately the issue of the environment is an issue of power, of who has the power to determine what happens to this planet. Only in a society where we have the power to determine what can and cannot be done will we be able to stop this headlong rush to environmental devastation. That means a world of common ownership and democratic control. Anything else which anyone offers is merely using band aids to seal a volcano.

Radical change is necessary, a change in our thinking leading to a radical change in our socio-economic system. To save the Earth, life and human civilisation, we have to replace existing, profit-based, exploitative, oppressive, manipulative, disruptive and dehumanising capitalist society with long-overdue socialist society. A worldwide association of humans irrespective of nationalities, race, ethnicity, and sex has to be organised, which will function on the basis of participatory democratic principles.

This socialist, resource-based sustainable economy, with democratic control over the means of production and distribution, will produce things as per social needs. Preserving ecological balance is only possible in a world, socialist society. The most serious barrier to doing this is the prevailing capitalist mode of production. It’s the responsibility of the working class, who create and sustain human civilisation, to protect it by establishing world socialism democratically with the force of our immense majority.

The exact class which is actively cranking up the global thermostat that threatens to inundate 20 percent of the world’s population currently controls the United Nations and the parliaments of the different nations. So, we, the working class, should expect nothing from the ruling minority capitalist class but should rapidly organise ourselves into a political party of our own on a global basis, with the aim of establishing socialism worldwide, democratically. This is the only way out for humanity.
Posted by Imposs1904 at 12:32 PM No comments: